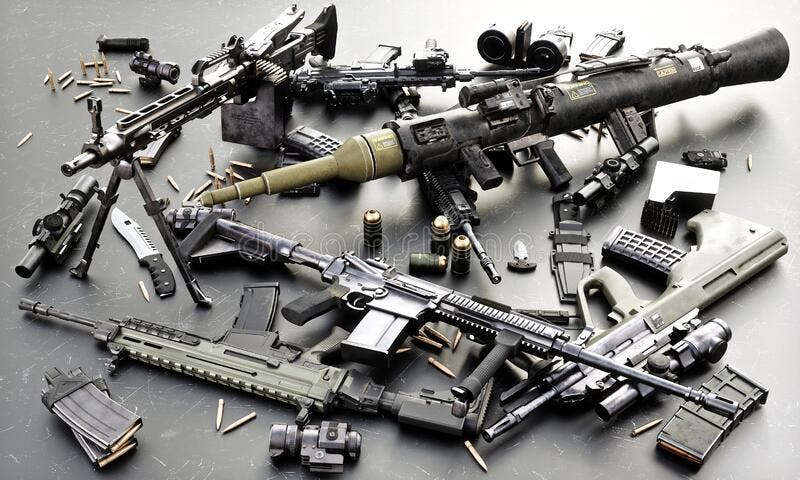 Killer weapons and ammunition pouring into Somalia, on top of topnotch military training packages, are once more turning Somalia into a potential tyrant and a threat to regional security with the monster army being built.

Despite a 1991 UN arms embargo slapped on ‘Somalia’, including a Somaliland completely independent of the rest of Somalia, Mogadishu has slowly been amassing weapons from various sources: black market, former Soviet block countries, Yemen, Al Qaeda and so on.

Besides the more shady, less open markets, Somalia has, of recent, found a way to openly exploit bigger countries and organizations such as the UN itself, the United States and the AU to provide it legitimate means to bring state of the art arsenal to the country in the form of peacekeeping initiatives and security training programmes.

Turkey has, however, played the greatest, most unaccounted, semi-legit channel to ‘equip’ thousands of ‘troops it trained’.

Building what it called, a training academy in Mogadishu which, in fact, is the largest, single-country foreign military base in the Horn of Africa, Turkey has flooded the Somalia army with a variety of weapons and munitions that can cut it a swathe through Eastern Africa all the way to Cape Town in South Africa – if need be.

AMISOM and non-AMISOM Ethiopian troops were always rumoured to have found market niches that smuggle guns and munition to potential, black market dealers, largely, in Mogadishu.

Rival regional interests such as that born of the Gulf rift involving the UAE, Qatar and Saudi Arabia chipped in using their own methods and channels.

Eric Princes’s Blackwater-turned-‘Academy, Group 4 and Saracen have played their parts in the weapons stockpile.

Most of these dealings were painted with big letters crying out real and not-so-real Shabaab and Daesh threats.

Somaliland – to be fair – was never part of the cauldron.

Now that some countries have started openly shipping guns and ammunition to the still weak and corrupt government in Mogadishu, silence was, to Somaliland, no longer an option. 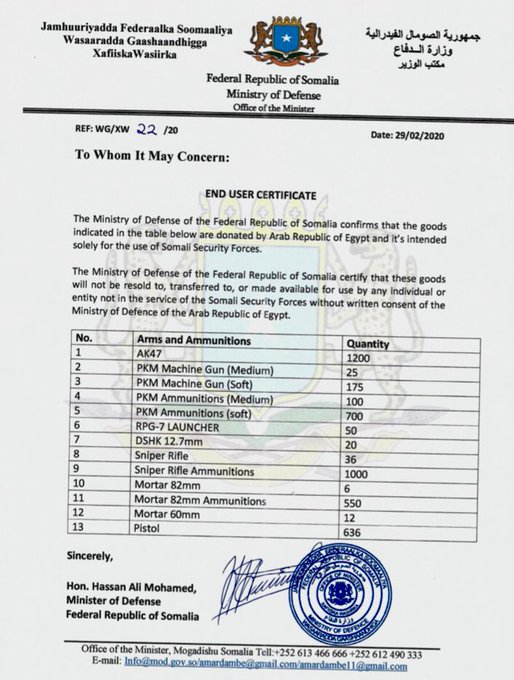 As is shown in above ‘end-user certificate’, there are not only light automatic guns such as the AK47 but PKM machine guns, sniper rifles, two types of mortar guns and their ammunition.

What is of particular interest in this consignment is the ‘indication’ of supply of pistols. One may remember that almost all assassinations attributed to Daesh and Shabaab hit units use pistols – a fact which brings to questions as has often been alluded to if, in fact, Daesh and Shabaab are responsible for all the hits. NISA – the Somali intelligence at the head of which is the notorious Qatar-henchman, Fahad Yassin, has been known to use hit operations to keep aid flow intact, point accusing finger at the Islamist Groups, and send fear messages rippling through critical pockets in society.

The Republic of Somaliland’s Minister for Defence, Abdiqani Mohamoud Atteye, in a recent post, highlights how disconcerting the supply of weapons to a country that cannot even vouch for its safety is.

The Minister voiced how Somaliland was ‘deeply concerned over Somali gov failure to abide by the UN arms embargo’, condemning Egypt for side-skirting the ban.

The Gov of Somaliland are deeply concerned over Somalia Gov it’s failure to abide the UN Arms Embargo. We condemn the Egyptian Gov for violating the arms embargo on Somalia. This poses a serious risks to the peace & stability of the region.@_AfricanUnion @UN @musebiihi pic.twitter.com/v2yJr2HgBh

Somaliland has time and again called the international community to think far ahead and give deeper attention to what was going in Somalia and its military build-up.

Under an illegitimate 1960 merger with Italian Somalia, Somaliland suffered thirty-year domination which ended in the killing of more than 50 000 of its citizens, destruction of untold of properties, a wind-back to its education, economy, industrialization, health and the flight of nearly half a million refugees to Ethiopia in the late ’80s.

The UN and the AU, for one, have to take another take of the situation – most certainly.

Conflict/Crime Somtribune Africa - July 15, 2020
Violence in Ethiopia underscores unresolved ethnic tensions Oromia, one of the regions in Ethiopia’s ethnically constituted federation and the country’s most populated one, also happens...
© SomTribune 2016, All Rights Reserved | Designed by SomSite