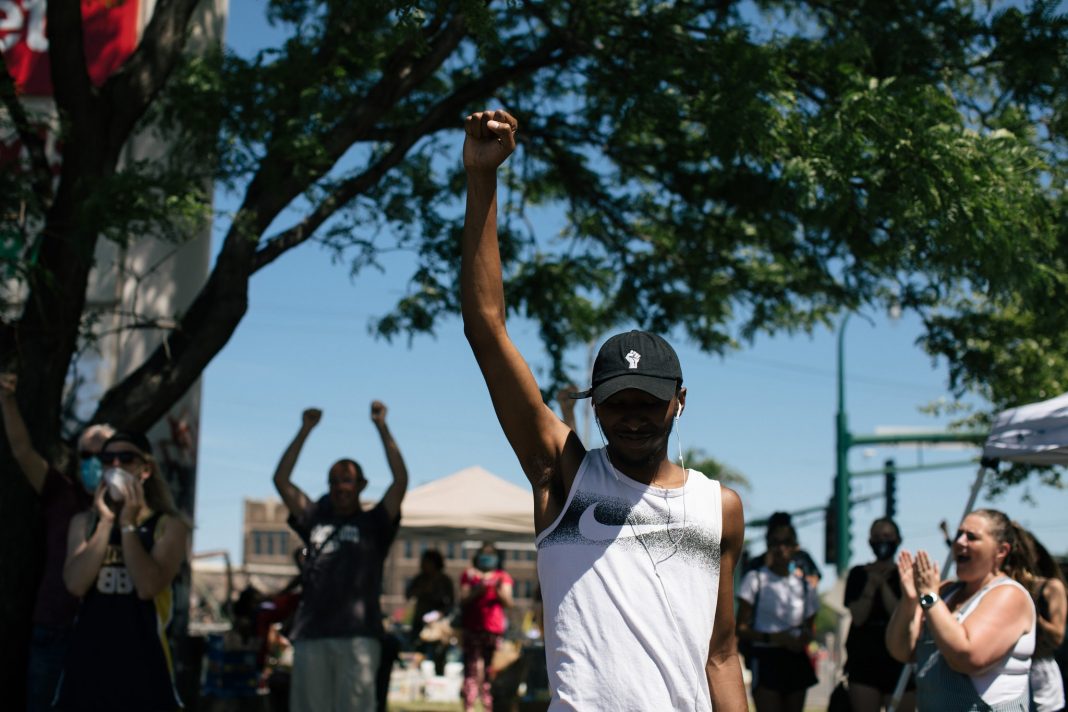 ST. PAUL, Minn. — The three Minneapolis police officers who failed to intervene while George Floyd was killed were charged on Wednesday with aiding in his death, and officials pressed a more severe charge against Derek Chauvin, the officer who pinned Mr. Floyd to the ground with a knee for nearly nine minutes while he pleaded, “I can’t breathe.”

Announcing the charges, Keith Ellison, Minnesota’s attorney general, who was assigned by the governor to handle the closely watched case, asked for patience during what he said would be a lengthy investigation and cautioned that history revealed serious challenges in prosecutions of police officers. Mr. Chauvin is now charged with second-degree murder.

“We’re here today because George Floyd is not here. He should be here,” said Mr. Ellison, a former Democratic congressman and civil rights lawyer, adding later: “Trying this case will not be an easy thing. Winning a conviction will be hard.”

“I take no joy in this,” Mr. Ellison said. “But I feel a tremendous sense of duty and responsibility.”

On a ninth straight night of demonstrations, thousands of people amassed on Wednesday, including on the streets of West Hollywood, Calif., and outside the Colorado State Capitol. Issuing intensifying calls for changes to American policing, the protesters showed no signs of calling off their activism, and in New York City, a large crowd assembled near the mayor’s official residence.

The fallout from Mr. Floyd’s death continued unabated as his official autopsy, released for the first time, revealed that he was known to have had the coronavirus in early April, though he was believed to be asymptomatic at the time of his death. Demonstrators have regularly pointed out that police violence and Covid-19 are disproportionately affecting African-Americans.

Beyond Minnesota, former President Barack Obama called on every mayor in the nation to review use-of-force policies and make reforms. Officials in Virginia announced plans to remove a Robert E. Lee statue in Richmond, and an additional proposal emerged to remove other Confederate monuments in the city.

And in various states, politicians were considering new legislation aimed at overhauling police procedures and systemic inequities, including a ban on chokeholds in Colorado, a bill aimed at minimizing the use of lethal force in Wisconsin, and a potential repeal of California’s 24-year-old ban on affirmative action in university admissions and public sector contracting and hiring.

Some of the demonstrators who have taken to the streets lauded the new criminal charges against the Minneapolis officers, who were all fired last week, in a case that set off waves of anger and outrage since a video of Mr. Floyd’s death became public. Many had called for harsher charges against Mr. Chauvin, who was initially charged with third-degree murder, and for charges against the other officers. Still, many protesters said the new charges would not quell the demonstrations, which were seeking broader systemic changes to the nation’s justice system.

“For me, it’s just one step,” Cortez Hollis said, as he took part on Wednesday in a protest against police brutality and the local police union leadership in Minneapolis. The charges against these police officers, he said, were only a beginning: “I recognize it’s not a sprint, it’s a journey.”

At a protest on Chicago’s North Side, Jonathan Mejias said he was gratified by the news of the charges — to a point.

“It’s just one piece,” he said. “The world needs to know that it doesn’t end with resolving this one case. There are too many more out there.”

And in Los Angeles, as several hundred people demonstrated outside City Hall, Byron Spencer said he felt both “elated and defeated” about the developments in Minneapolis. He said he had seen countless moments of public outrage stirred by the abuses of black men by the police. “I’m 55, I’m black and I’m male,” he said. “I’ve seen the cycle.”

The new charges came on the eve of a memorial that is expected to draw large crowds to a Minneapolis chapel to remember Mr. Floyd, and representatives for the family described the moment as a painful yet necessary development.

“This is a significant step forward on the road to justice, and we are gratified that this important action was brought before George Floyd’s body was laid to rest,” said Ben Crump, a lawyer for Mr. Floyd’s family. “That is a source of peace for George’s family in this painful time.”

Around the country, political leaders responded to the announcement of charges but said they recognized that it would not mean an end to the unrest that has roiled the country.

Gov. Tim Walz of Minnesota, a Democrat, said he viewed the charges as “a meaningful step toward justice for George Floyd.” But he added, “We must also recognize that the anguish driving protests around the world is about more than one tragic incident.”

In the new charges announced by Mr. Ellison, Mr. Chauvin, a white police officer who could be seen in a video pinning Mr. Floyd, a black security guard, beneath his knee for nearly nine minutes, was charged with second-degree murder, a count that is more serious and could carry a longer prison sentence than the third-degree murder charge he had initially faced.

In Minnesota, second-degree murder requires prosecutors to prove either that Mr. Chauvin intended to kill Mr. Floyd, or that he did so while committing another felony. A court filing indicated that prosecutors planned to take the latter approach. Third-degree murder does not require an intent to kill, according to the Minnesota statute, only that the perpetrator caused someone’s death in a dangerous act “without regard for human life.”

Under Minnesota law, second-degree murder comes with a maximum sentence of 40 years in prison, and accomplices can be eligible for the same penalties as the primary defendant.

Three other officers who were present — Thomas Lane, J. Alexander Kueng and Tou Thao — were charged with aiding and abetting second-degree murder. Mr. Lane and Mr. Kueng are white and Mr. Thao is Hmong, according to a spokesman for Mr. Ellison. Mr. Chauvin was also charged with manslaughter in the second degree, and the three other officers also were charged with aiding and abetting manslaughter in the second degree.

Lawyers for the four officers declined to comment or did not respond to inquiries. Court appearances were scheduled for as early as Thursday for at least some of them. Mr. Chauvin, who has been in custody since last week, was scheduled to appear in court on Monday, according to jail records.

New court documents, released on Wednesday, shed light on what happened before Mr. Floyd’s death on May 25.

The episode began when Mr. Kueng and Mr. Lane, answering a 911 call from a store clerk about receiving a fake $20 bill from a customer, approached a parked car. Mr. Lane drew his handgun and pointed it at Mr. Floyd through an open window, putting the gun back in his holster after Mr. Floyd put his hands on the steering wheel.

The two officers then took Mr. Floyd and sat him on the ground, handcuffed. “When Mr. Floyd sat down he said, ‘thank you man,’ and was calm,” according to a statement of probable cause. But when officers tried to put him in the squad car, Mr. Floyd stiffened and fell to the ground.

Mr. Floyd said he was not resisting but that he was claustrophobic and did not want to go in the back seat. He struggled with the two officers and with Mr. Chauvin and Mr. Thao, who had arrived separately. After that, Mr. Floyd was put face down on the ground, Mr. Chauvin’s knee on his neck, the court documents said.

Mr. Lane held his legs and Mr. Kueng held his back. Mr. Floyd began to cry out “I can’t breathe” and “I’m about to die.” Mr. Lane asked whether they should roll Mr. Floyd on his side. “No, staying put where we got him,” Mr. Chauvin responded, according to the document. Mr. Lane then said, “I am worried about excited delirium or whatever.” Mr. Chauvin replied, “That’s why we have him on his stomach.”

Soon after, Mr. Floyd stopped moving, and he was later pronounced dead at the Hennepin County Medical Center.

A private autopsy conducted by doctors hired by Mr. Floyd’s family determined that Mr. Floyd died not just because of the knee on his neck, but also because of pressure other officers applied on his back. The cause of death was listed as mechanical asphyxia, a homicide, the autopsy found.

The Hennepin County medical examiner also found that the manner of death was homicide but said that Mr. Floyd, who had heart conditions, went into cardiac arrest while being restrained by law enforcement. A summary also noted that Mr. Floyd was intoxicated with fentanyl and had recently used methamphetamines. The official autopsy gave no indication that the coronavirus played any role in his death.

Mr. Thao, 34, had faced six misconduct complaints in his career with the Minneapolis Police Department. He also was the subject of a lawsuit that claimed he and another officer punched, kicked and kneed an African-American man, leaving the man with broken teeth and bruises. A lawyer involved in the case said the city settled the case by agreeing to pay $25,000.

Mr. Chauvin had faced at least 17 misconduct complaints over nearly two decades with the department.

Neither Mr. Lane, 37, nor Mr. Kueng, 26, had prior misconduct complaints filed against them, according to the Police Department.

In Minneapolis on Wednesday, Quincy Mason, the son of George Floyd, walked slowly to the site where his father was killed, through a phalanx of journalists and onlookers. He dropped to one knee on top of a chalk drawing of Mr. Floyd’s body with wings and a crown.

Mr. Mason thanked the protesters for demonstrating and noted the emotional weight of the moment before a crowd of about 300. They stood in front of a corner market that has become a makeshift memorial flooded with flowers, murals, posters and other tributes to Mr. Floyd.