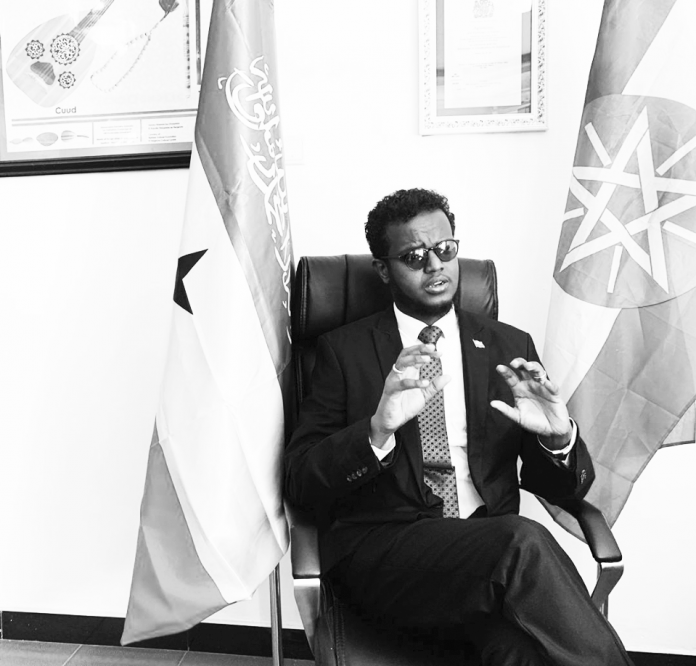 The Ethiopian Herald gave an exclusive sitting to Deputy Ambassador Barkhad Mohamoud Kaariye of the Somaliland Permanent Diplomatic Mission in Addis Ababa, Ethiopia. The interview focused on the geopolitical and historical relations between the Republic of Somaliland and its ally and neighbour, the Federal Republic of Ethiopia, taking readers through the levels and stages inherent in such strategic relations to foster peace, stability, economic development and overall prosperity for the two peoples and the Horn region, in general. 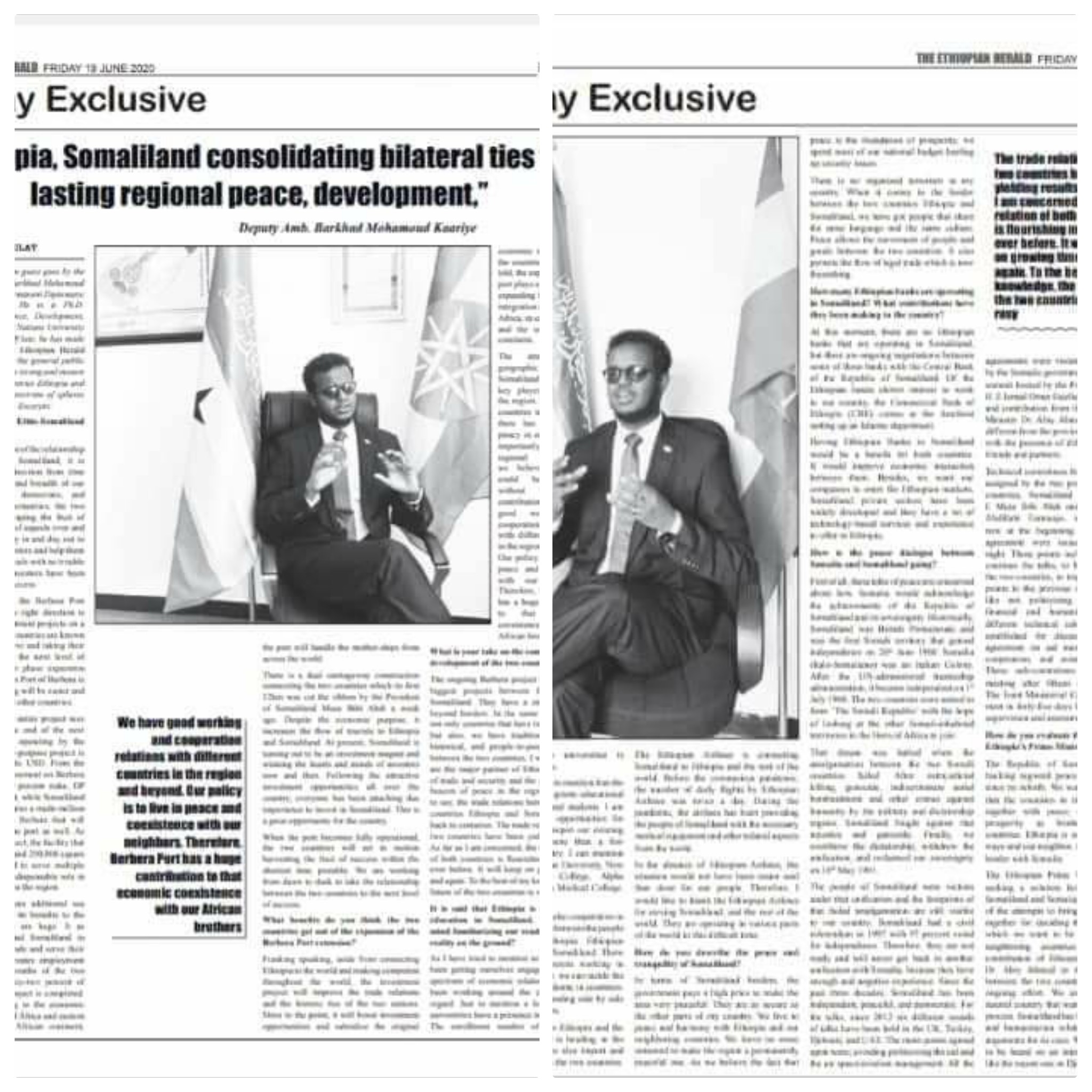 What is your take on Ethio-Somaliland relations?

As everyone is well aware of the relationship between Ethiopia and Somaliland, it is stepping in the right direction from time to time. As the length and breadth of our country are peaceful, democratic, and full of investment opportunities, the two countries have been reaping the fruit of success in a wide array of aspects over and over again. We work day in and day out to attract international investors and help them achieve all investment goals with no trouble all over the country. Investors have been harvesting the fruit of success.

While on the subject, the Berbera Port which is heading in the right direction is one of the biggest investment projects on a national scale. The two countries are known for working hand-in-glove and taking their respective countries to the next level of success. When the first phase expansion project of the world-class Port of Berbera is finalized, the whole thing will be easier and simpler for Ethiopia and other countries.

By the same token, the entire project sees the light of day by the end of the next year and embarks on operating by the same period. This multi-purpose project is worth a total of 442 mln. USD. From the tripartite investment agreement on Berbera Port, Ethiopia holds 19 percent stake, DP World holds a 51 percent, while Somaliland holds the rest. There is also a multi-million economic free zone in Berbera that will boost the function of the port as well. As the first phase of the project, the facility that covers 400-meter quay and 250,000 square meters yard is expected to serve multiple functions and play an indispensable role in boosting economic ties in the region.

Likewise, the port opens additional sea outlets to Ethiopia and its benefits to the import-export business are huge. It as well helps Ethiopia and Somaliland to engage in a balanced trade and serve their mutual interests and creates employment opportunities for the youths of the two nations. Nowadays, sixty-two percent of the first phase of the project is completed. Apart from contributing to the economic integration in the horn of Africa and eastern Africa and the wider African continent, the port will handle the mother-ships from across the world.

There is a dual carriageway construction connecting the two countries which its first 12km was cut the ribbon by the President of Somaliland Muse Bihi Abdi a week ago. Despite the economic purpose, it increases the flow of tourists to Ethiopia and Somaliland. At present, Somaliland is turning out to be an investment magnet and winning the hearts and minds of investors now and then. Following the attractive investment opportunities all over the country, everyone has been attaching due importance to invest in Somaliland. This is a great opportunity for the country.

When the port becomes fully operational, the two countries will set in motion harvesting the fruit of success within the shortest time possible. We are working from dawn to dusk to take the relationship between the two countries to the next level of success.

What benefits do you think the two countries get out of the expansion of the Berbera Port extension?

Franking speaking, aside from connecting Ethiopia to the world and making competent throughout the world, the investment project will improve the trade relations and the historic ties of the two nations. More to the point, it will boost investment opportunities and subsidize the original

The strategic and geographic location of Somaliland makes us a key player concerning the region. Unlike other countries in the region, there has never been piracy in our sea. More importantly, regarding regional cooperation, we believe that less could be achieved without Somaliland’s contribution. We have good working and cooperation relations with different countries in the region and beyond. Our policy is to live in peace and coexistence with our neighbors. Therefore, Berbera Port has a huge contribution to that economic coexistence with our African brothers.

What is your take on the common border development of the two countries?

It is said that Ethiopia is investing in education in Somaliland. Would you mind familiarizing our readers with this reality on the ground?

As I have tried to mention so far, we have been getting ourselves engaged in a wide spectrum of economic relations. We have been working around the clock in this regard. Just to mention a few, Ethiopian universities have a presence in our country. The enrollment number of Somaliland

students in Ethiopian universities is increasing time after time.

More importantly, I have to mention that the government of Ethiopia grants educational scholarships to Somaliland students. I am very grateful to those opportunities for the reason that it will deepen our existing relations. There are more than a few universities in our country. I can mention some of them like Admas University, New Generation University College, Alpha University, Addis Ababa Medical College, and the like.

In a similar vein, there is also cooperation in terms of medical relations between the people of Somaliland and Ethiopia. Ethiopian doctors are working in Somaliland. There are as well medical doctors working in Ethiopia. At this moment, we can tackle the crisis by COVID-19 pandemic in countries-level cooperation and standing side by side between the two countries.

The relationship between Ethiopia and the Republic of Somaliland is heading in the right direction. There are also import and export relations between the two countries The Ethiopian Airlines is connecting Somaliland to Ethiopia and the rest of the world. Before the coronavirus pandemic, the number of daily flights by Ethiopian Airlines was twice a day. During the pandemic, the airlines has been providing the people of Somaliland with the necessary medical equipment and other related aspects from the world.

In the absence of Ethiopian Airlines, the situation would not have been easier said than done for our people. Therefore, I would like to thank the Ethiopian Airlines for serving Somaliland, and the rest of the world. They are operating in various parts of the world in this difficult time.

How do you describe the peace and tranquility of Somaliland?

In terms of Somaliland borders, the government pays a high price to make the area very peaceful. They are as secure as the other parts of my country. We live in peace and harmony with Ethiopia and our neighboring countries. We leave no stone unturned to make the region a permanently peaceful one. As we believe the fact that

peace is the foundation of prosperity, we spend most of our national budget beefing up security issues.

How many Ethiopian banks are operating in Somaliland? What contributions have they been making to the country?

At this moment, there are no Ethiopian banks that are operating in Somaliland, but there are ongoing negotiations between some of these banks with the Central Bank of the Republic of Somaliland. Of the Ethiopian banks shown interest to work in our country, the Commercial Bank of Ethiopia (CBE) comes at the forefront setting up an Islamic department.

Having Ethiopian Banks in Somaliland would be a benefit for both countries. It would improve economic interaction between them. Besides, we want our companies to enter the Ethiopian markets. Somaliland private sectors have been widely developed and they have a lot of technology-based services and experience to offer to Ethiopia.

How is the peace dialogue between Somalia and Somaliland going?

First of all, these talks of peace are concerned about how Somalia would acknowledge the achievements of the Republic of Somaliland and its sovereignty. Historically, Somaliland was British Protectorate and was the first Somali territory that gained independence on 26th June 1960. Somalia (Italo-Somaliano) was an Italian Colony. After the UN-administered trusteeship administration, it became independent on 1st July 1960. The two countries were united to form ‘The Somali Republic’ with the hope of looking at the other Somali-inhabited territories in the Horn of Africa to join.

That dream was halted when the amalgamation between the two Somali countries failed. After extrajudicial killing, genocide, indiscriminate aerial bombardment and other crimes against humanity by the military and dictatorship regime, Somaliland fought against that injustice and genocide. Finally, we overthrew the dictatorship, withdrew the unification, and reclaimed our sovereignty on 18th May 1991.

The people of Somaliland were victims under that unification and the footprints of that failed amalgamation are still visible to our country. Somaliland had a civil referendum in 1997 with 97 percent voted for independence. Therefore, they are not ready and will never get back to another unification with Somalia, because they have enough and negative experience. Since the past three decades, Somaliland has been independent, peaceful, and democratic. For the talks, since 2012 six different rounds of talks have been held in the UK, Turkey, Djibouti, and UAE. The main points agreed upon were; avoiding politicizing the aid and the air space/aviation management. All the agreements were violated and abandoned by the Somalia governments. For the recent summit hosted by the President of Djibouti H. E Ismail Omer Guelleh with the presence and contribution from the Ethiopian Prime Minister Dr. Abiy Ahmed, seems that it’s different from the previous talks. It was held with the presence of different international friends and partners.

Technical committees from both sides were assigned by the two presidents of the two countries, Somaliland and Somalia, H. E Muse Bihi Abdi and H. E. Mohamed Abdillahi Farmaajo, respectively. It is now at the beginning stage, five points agreement were issued on Wednesday night. Those points include the efforts: to continue the talks, to build trust between the two countries, to implement the agreed points in the previous rounds of the talks like not politicizing the international financial and humanitarian aid, three different technical sub-committees were established for discussing and having agreement on aid management, security cooperation, and aviation management. These sub-committees will have their meeting after fifteen days in Djibouti. The Joint Ministerial Committee will also meet in forty-five days later in Djibouti for supervision and assessment of the process.

How do you evaluate the contribution of Ethiopia’s Prime Minister Abiy Ahmed?

The Republic of Somaliland has been backing regional peace and development since its rebirth. We want and still believe that the countries in the region can live together with peace, development, and prosperity as brotherly neighboring countries. Ethiopia is our partner in many ways and our neighbor, too. It also shares a border with Somalia.

The Ethiopian Prime Minister has been seeking a solution for the Republic of Somaliland and Somalia issue. He was part of the attempts to bring the two countries together for deciding the future relations which we want to be two peaceful and neighboring countries. Therefore, the contribution of Ethiopian Prime Minister Dr. Abiy Ahmed to the recent summit between the two countries is part of that ongoing effort. We are welcoming any neutral country that wants to be part of the process. Somaliland has legally, historically, and humanitarian related well-articulated arguments for its case. We wanted our case to be heard on an international platform, like the recent one in Djibouti.

Deputy Ambassador Barkhad is a Ph.D. Candidate in Governance, Development, and Peace at the United Nations University for Peace (UPEACE).