The Republic of Somaliland’s Covid-19 Preparedness national committee announced, Tuesday, that all restrictions previously imposed to prevent the intensity and spread of the pandemic have been categorically lifted.

According to the statement which the NPCCOVID-19 released, the ban on both incoming and outgoing flights of all airlines have been lifted effective from the 30th of June. Likewise, the lift will apply to sea vessels arriving at Berbera which was previously limited to seafaring ships, boats and dhows bringing essential, life-saving commodities.

Public gatherings and social events are no longer circumscribed, meaning conference and dining and wedding halls are, again, open for business.

All learning institutions will reopen and restrictions on passenger capacity on public transport are waived.

The government, also, lifted the ban on inland travel across the borders with neighbouring countries such as Ethiopia, Somalia and Ethiopia.

The lift of the ban, however, was not free of conditions.

Incoming passengers and travellers crossing over to the Republic of Somaliland have to produce, the NPC said, a valid, COVID-free certificate that is not older than four days.

The statement, also, repetitiously refers ‘with strict adherence to preventive measures” when it does not particularly, except for above, specify any. 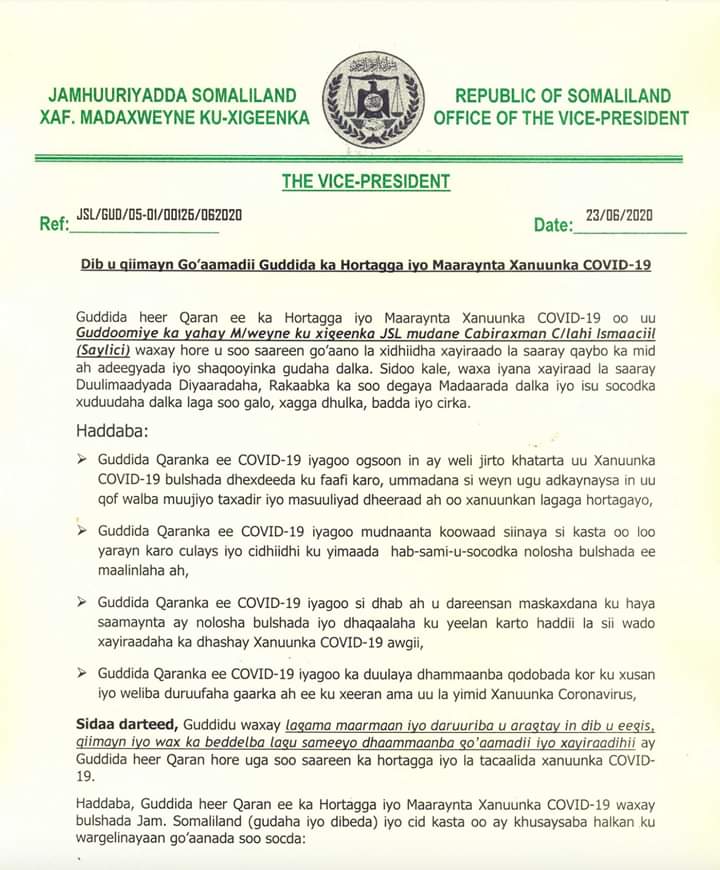 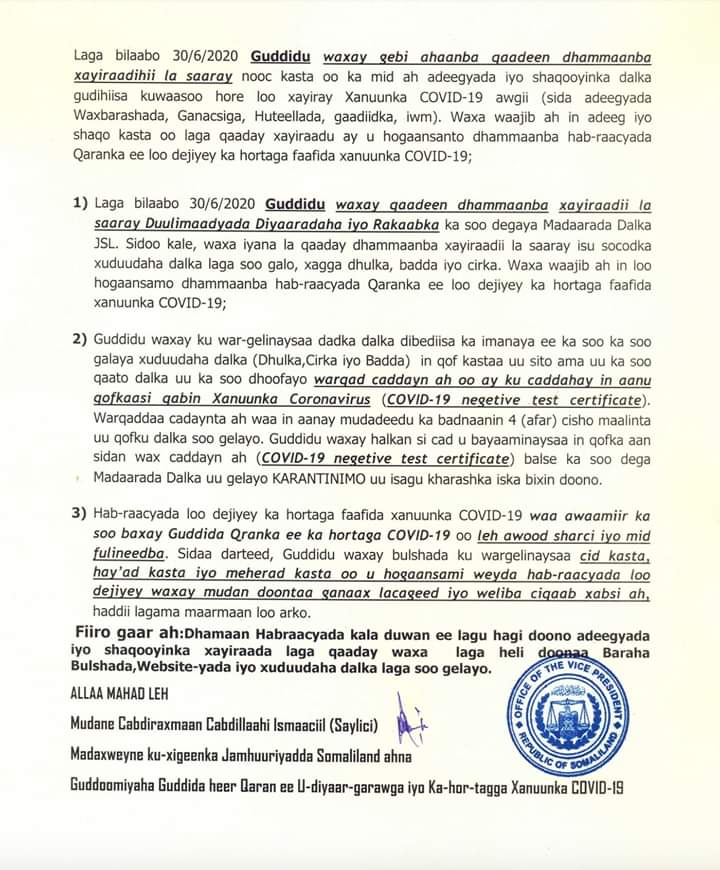 The statement comes on the same day the Somaliland Ministry of Health Development announces 18 new positive cases hiking the number of positive-testing cases in Somaliland to 681, 28 deaths and a total of only 147 cases recovering.

The NPC did neither produce data to support its decision nor did it even try to justify it by citing economic, social or political reasons which account for a public perplexity the statement produced where it should have reassured them.

To many, the step appears as a face-saving measure since the Committee failed to enforce any of its earlier prevention measures with mosques still filled to capacity with no distancing encouraged, market places teeming with shoppers, Qat-munchers piling over one another at vendor kiosks, and with public transport – business as usual.

It was only a day before that the United States, one of the most advanced countries in the world, registered 30 000 new cases in a single day. Globally, on this same day, 9,233,897 cases are known to have tested positive out of which 475,173 dies with 475,173 more in active conditions varying from the critical to mild.

Regionally, the situation stands as depicted below: