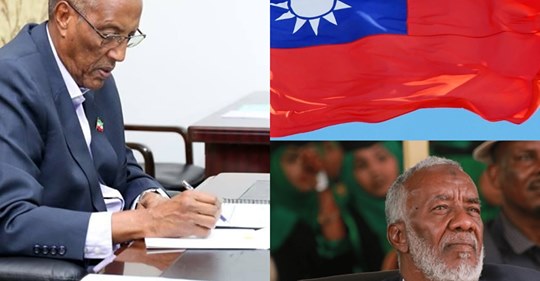 Somaliland representative will be tasked with expanding relations with Taiwan

President Muse Bihi Abdi of the Republic of Somaliland will soon send a representative to Taipei to develop long-term relations with Taiwan, according to a Tuesday (June 30) Facebook post from DPP Legislator Wang Ting-yu (王定宇).

Though details have not yet been made public, the representative may be a current member of Somaliland’s Foreign Affairs team, the Somaliland Chronicle reported. What is known is that Taiwan will also be establishing the Taiwan Representative Office in Somaliland, marking the first time under the Tsai administration that the name “Taiwan,” rather than “Republic of China,” will have been included in the official name of a foreign office, according to CNA.

Somaliland-Taiwan ties have been strengthening. Over the years, a number of Taiwanese government delegations have visited Somaliland, and the African nation’s Minister of Foreign Affairs and International Cooperation has also made a trip to Taiwan.

Taiwan began further expanding relations with Somaliland earlier this year and has closely collaborated with a number of its ministries on construction and science and technology.

Though the reason why Somaliland’s government has kept its relationship with Taiwan so secret is unclear, officials emphasized that its ties with Taiwan are important and indicated that Somaliland is quietly working with many nations around the world.

Located in northeastern Africa, also known as the “Horn of Africa,” Somaliland was under British rule until 1960 and was previously called British Somaliland.