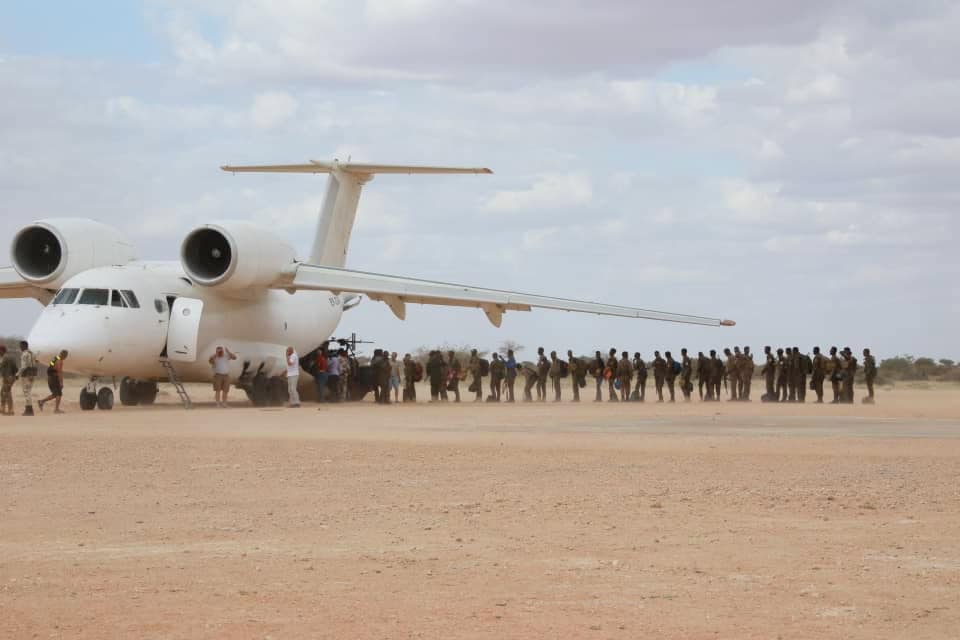 Over 200 special trained police officers of the Harim’ad Brigade were forced to leave Dhuusamarreeb of the Galmudug state of Somalia for a scheduled federal member states’ meeting to happen on Thursday, July 9.

The security paramilitary type forces were airlifted from Dhuusamarreeb to Mogadishu moments before the Hirshabelle President, Ahmed Abdi Waare, arrived at the city’s airstrip on another plane which he boarded from Beletwein – a short hop to the south from his destination.

Moving by land between cities, especially for high profile officials, is still something of the past for Somalia despite the gargantuan effort on the part of the international community and the untold of billions of US$ aid they pour into it

The evacuation of the federal Harim’ad units was forced, particularly, by the federal state presidents of Puntland and Jubaland, Saeed Abdullahi Mohamed ‘Deni’ and Ahmed Mohamed Islam ‘Ahmed Madoobe’, respectively.

Deni and Madoobe argued that, since the Harima’ad units were loyal to the federal government, they were not sure about their personal safety in the same city at all. It was either them staying away or the federal security forces leaving the area.

Deni sent advance members of his own Presidential Guards to Dhuusamarreeb to canvass the living quarters arranged for his stay and his personal security while in the area. Madoobe will also bring his own.

The five ‘presidents’ of Somalia’s federal government are not happy about how Villa Somalia was running national affairs. They were particularly ired by how the government handled the election process and specifically how the electoral law was set and rushed through parliament without giving them space for further consultations.

Mogadishu, as of today, appears to have lost the loyalty of member states due to, according to reports, its heavy-handed handling of federal affairs and, particularly, the absence of close consultations with federal members upon whom it would rather impose ‘orders’ and ‘decrees’.