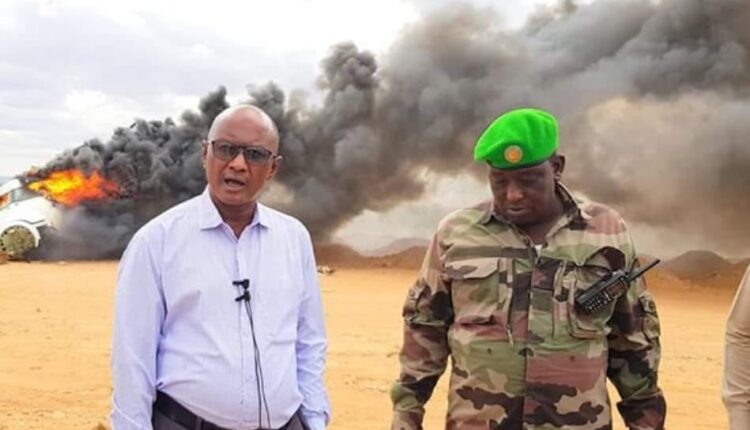 The Governor of Hiiraan region of the Somalia Federal State of Hirshabelle, Ali Jeyte Osman, blamed AMISOM and the federal government for the absence of firefighters at Beledweyne’s Ugaas Khalif airport where a cargo plane crash-landed and caught fire Tuesday.

“It is unfortunate that the Beledweyne airport (airstrip) lacks firefighting equipment. Full responsibility goes back to the central government and AMISOM,” he said.

The Governor was speaking to the media at the scene where a Djiboutian cargo plane crashed and caught fire which quickly devoured it rendering it a complete write-off within no time at all.

The Governor did not elaborate on why he blamed the AMISOM peacekeepers and did not his immediate government at the state level along with the central government in Mogadishu – if he had to.

The plane, according to the Governor, crash-landed when one of its wheels failed to open in time for it to land safely.

The plane was flying in foodstuff meant for IDPs affected by devastating floods which recently left a large population of Beledweyne residents homeless leaving most of their homes in shambles and inhabitable.

This is the third plane crash in Somalia since March 4 when another plane bringing humanitarian aid to Berdaale was shot down by Ethiopian forces serving under the AMISOM standard. Another plane crashed in Baardheere of the Jubaland state earlier in the month on 7 July.

Ugaas Khalif airstrip at Beledweyne is neither paved nor does it have other facilities that support air traffic the same as dozens more in major towns of Somalia. Only a few such as Mogadishu,  Kismayu, Garowe, Bossasso and Baidoa to some extent offer a smatter of services at varying degrees of completion and/or readiness. Djiboutian peacekeepers make-up the largest AMISOM contingent in the immediate area. Djibouti deployed 960 of its elite troops in 2011. The troops have since then had had more than a dozen deadly encounters with Al Shabaab. Beledweyne serves as AMISOM sector 4 HQ.