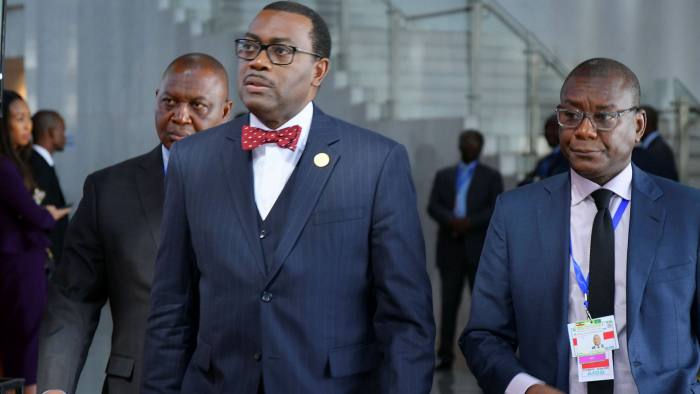 An independent inquiry has cleared the president of the African Development Bank of misconduct, paving the way for his re-election and drawing a line under allegations that had threatened to undermine the lender’s reputation.

The claims against Akinwumi Adesina had brought the AAA-rated development bank into dispute with the Trump administration after Steven Mnuchin, US Treasury secretary, wrote a letter in May in which he expressed “deep reservations” about the findings of an internal inquiry that had cleared Mr Adesina of wrongdoing.

Some of Mr Adesina’s supporters had accused Washington of meddling in the internal affairs of the African institution and seeking to undermine its credibility. The US is the largest non-African shareholder of the AfDB and the biggest of its 80 shareholders after Nigeria.

On Tuesday, the three-member panel, chaired by Mary Robinson, former president of Ireland, backed an internal ethics inquiry, saying that allegations against Mr Adesina had been “properly considered and dismissed”. It also found that submissions made by Mr Adesina were “consistent with his innocence” and “persuasive”.

In January, whistleblowers at the bank based in Abidjan, Ivory Coast, had accused Mr Adesina of abusing his office. In a 16-point document they had alleged misconduct, including what they said was the questionable hiring of several Nigerians, and of approving overly generous severance packages. Mr Adesina, a former agriculture minister of Nigeria, had denied all allegations.

Whistleblowers had called the internal inquiry a whitewash. They objected to the ethics committee’s failure to seek external legal advice and to its dismissal of their allegations on the grounds of insufficient evidence.

Dunyako Ahmadu, former principal legal counsel at the AfDB, said the external inquiry led by Mrs Robinson had merely rubber-stamped the findings of the ethics committee. “The notion of putting the burden on whistleblowers to provide substantive evidence is completely misplaced,” he said, adding that the bank should have made its own investigations into Mr Adesina’s conduct.

Mr Adesina’s supporters said the bank president had been completely exonerated and could now run for a second five-year term, unopposed, in elections rescheduled for next month.

The accusations surrounding Mr Adesina had plunged the bank into its most serious crisis since 2003, when it had to relocate to Tunis for a decade because of civil war in Ivory Coast. In the mid-1990s, the bank lost its AAA-rating after serious financial mismanagement.

Last year, the bank raised its capital by $115bn to $208bn, the biggest increase in its 55-year-old history, in what had been seen at the time as a signal of shareholders’ strong backing for Mr Adesina’s tenure.

In March, the AfDB raised $3bn in a “Fight Covid-19” social bond that was said to be the largest of its kind ever floated on the international capital markets.

By David Pilling in London and Antoaneta Roussi in Nairobi