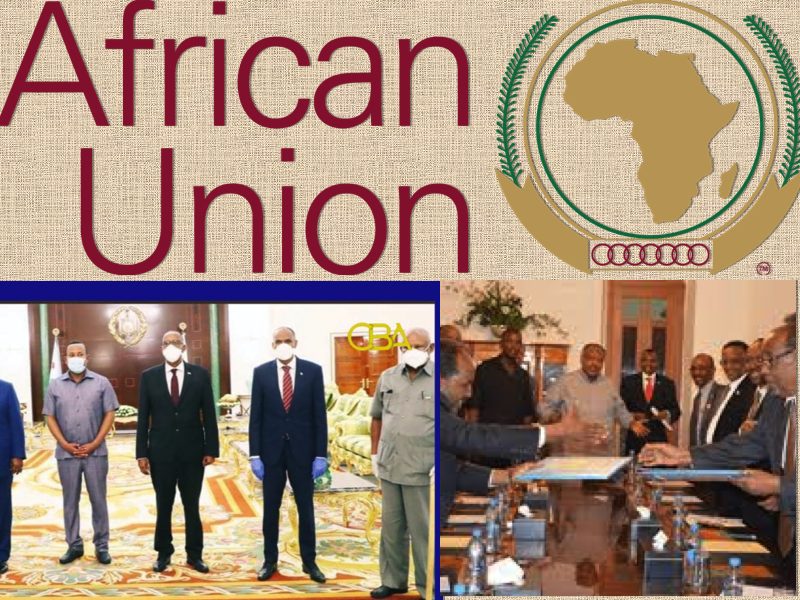 The AU can support the ongoing negotiations between Somalia and Somaliland by providing technical support and acting as guarantor to ensuing agreements.

The leaders of Somalia and the self-declared independent region of Somaliland held a landmark Consultations Summit in Djibouti on 14 June 2020. The meeting was chaired by Djibouti’s President Ismaïl Omar Guelleh and attended by Ethiopian Prime Minister Abiy Ahmed, who facilitated informal talks between the two leaders in Addis Ababa in February 2020.

A meeting of the newly established 14-member Joint Ministerial Committee, expected to oversee technical-level negotiations, took place from 15–17 June. The meeting was led by Somalia’s minister of interior and Somaliland’s minister of foreign affairs. Djibouti’s foreign affairs minister mediated the talks, while facilitators from the United States (US) and European Union (EU) were present.

The African Union (AU) was not invited to the initial meeting and its absence was conspicuous, especially as external actors such as the US and EU were in attendance. However, according to Djiboutian Foreign Affairs Minister Mahmoud Ali Youssouf, ‘other partners may join the process’ going forward.

It is not the first time the AU has been absent from Somalia–Somaliland negotiations. While the Organization of African Unity (OAU)/AU has been engaged in national peace and reconciliation processes for Somalia since the civil war broke out in 1991, the AU has done little to bring Somalia and Somaliland together for negotiations. It has also not helped to address the outstanding dispute between Somalia and its self-declared independent region.

The AU’s lack of engagement thus far has been driven by its principle of respecting the territorial integrity of member states and recognising colonial borders. However, changing regional geopolitics, as well as serious political developments in Somalia and in the region, dictate that it reconsider its engagement in the negotiations, which are expected to resume in July.

While Somaliland’s independent statehood is at the centre of the dispute between the two parties, there are several issues of common interest they may agree on. The AU can play an instrumental role in helping not only Somalia and Somaliland but also regional actors in reaching agreement on key issues that impact the peace and security of the whole region.

Outcome of the latest negotiations

Many see the resumption of formal dialogue between Somalia and Somaliland as the major breakthrough of these meetings. Unlike previous talks, there seems to be a sense of urgency to reach an understanding on certain issues, particularly related to humanitarian access, security and the aviation sector.

Significant outcomes of the meeting include the authorisation of the Joint Ministerial Committee to lead subsequent negotiations between Somalia and Somaliland. So far the parties have agreed on the process for further negotiations, confidence-building measures and the need to refrain from actions that could derail negotiations.

According to the communiqué from the Joint Ministerial Committee, the parties have also agreed not to politicise humanitarian assistance and foreign aid, and not to impede non-political and social interaction between Somalia and Somaliland.

The negotiations are expected to lead to an understanding on the final status of Somaliland.

AU’s position on the dispute

Successive AU and OAU summit decisions since the 1990s have viewed Somaliland’s quest for independent statehood as a separatist movement, which is not regarded favourably by the continental body.

In addition to its respect for colonial boundaries, the AU is also apprehensive of engaging Somaliland as it might set a precedent for Somali states such as Puntland and Galmudug. These states are increasingly asserting their autonomy within Somalia, alongside other movements for self-determination across the continent.

In the face of the major peace and security threat from terrorist groups such as al-Shabaab, the dispute between Somalia and Somaliland has been deprioritised by the AU for more than a decade.

While the Somali Federal Government is in full agreement with the AU’s position, Somaliland rejects the AU’s consideration of its de facto statehood as contradicting the AU’s principle on the inviolability of colonial boundaries. Somaliland holds that its colonial territorial borders upon independence from British rule in 1960 and before it chose to join the united Somali Republic are identical to the territorial borders it currently claims. It maintains that this claim is supported by the AU’s 2005 fact-finding mission to Somaliland.

The gap created by the AU’s disengagement has resulted in non-African actors leading a number of negotiations between Somalia and Somaliland.

The United Kingdom, Turkey and the United Arab Emirates, all with vested interests in the strategically located region on the Gulf of Aden, have for many years attempted to bring the two sides together in high-level dialogue. In 2019 a Swiss non-governmental organisation also tried to bring the two sides together for negotiations in Nairobi, Kenya.

Some of these actors have competing interests in the region.

Negotiations hosted by regional actors (including twice by Djibouti and more recently Ethiopia) have not led to a significant breakthrough in the negotiations between the two parties.

Since all of these actors have vested interests in these negotiations, the AU can become a relatively neutral mediator between the two parties.

Counter-terrorism is one major priority area in which Somalia and Somaliland could collaborate. The AU, through the AU Mission in Somalia (AMISOM), has the biggest counter-terror operation in the region. It can help both parties to reach an agreement on possible collaboration in the areas of intelligence sharing, border control and joint operations, especially as terrorist attacks in bordering areas of Puntland are on the rise.

In addition, overcoming trans-regional crime and enhancing the free movement of people requires that the two parties can agree on modalities for cross-border collaboration.

Maritime security and development of the blue economy is another important regional priority that cannot be fully realised without cooperation between Somalia and Somaliland, which control vast areas bordering the Gulf of Aden. Militarisation of the region, piracy, illegal fishing and instability created by the war in Yemen are issues that should be responded to at the regional and continental levels.

The two parties are more likely to respect agreements if a regional organisation such as the AU act as guarantor and hold each party accountable
The AU is already helping Somalia to secure international debt relief. As this can also benefit Somaliland, the AU can help the two parties reach an understanding on maximising these benefits. The two parties can further reach an agreement on accessing international financing and development aid. These are issues of contention from time to time as Somaliland currently cannot access financing and loans for development projects from international institutions such as the World Bank and the International Monetary Fund (IMF).

International relations, foreign investment, the utilisation of ports and Somaliland’s airspace are interrelated issues that have escalated tensions between Somalia and Somaliland in the past. While these issues are very much related to Somaliland’s status, the AU can support the two parties in reaching a framework agreement.

The two parties are more likely to respect agreements, regardless of changes in government in Somalia and Somaliland, if a regional organisation such as the AU act as guarantor of their agreement and hold each party accountable.

In the past, the two parties have accused one another of disrespecting agreements reached in various negotiations. For instance, while Somaliland accuses Somalia of nullifying their previous agreement to co-manage Somaliland’s airspace, Somalia accuses Somaliland of breaching their understanding on the development and use of Berbera Port.

The PSC Report is an initiative of the Institute for Security Studies (ISS) through its office in Addis Ababa, Ethiopia. It was established in 2009 with the principal aim of supporting and complementing the work of the African Union (AU) and its Peace and Security Council (PSC) through the provision of regular, independent and research-based information on and analysis of the PSC and its activities. The PSC Report offers the wider constituency of the AU, as well as African civil society organizations, the media and the international diplomatic community a reliable means of following and tracking the work of the PSC.

The PSC Report accomplishes these objectives through the publication of regular reports on issues that are either on the PSC’s agenda or that deserve its attention. Through its webpage dedicated exclusively to the ISS’ work on the PSC, the PSC Report also offers regular updates on current and emerging agenda items of the PSC.

The PSC Report has no institutional relationship with the AU or the PSC. However, it works in close collaboration with the AU Peace and Security Department, the Secretariat of the PSC and member states of the PSC.