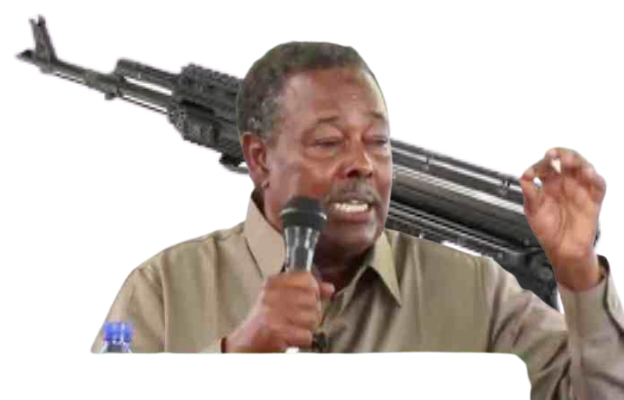 A former President of Somalia, Ali Mahdi Mohamed, threatened the incumbent, Mohamed Abdullahi Farmajo, that he will rather take up arms against him than tolerate delayed elections and/or a term extension to his presidency.

“I advise that you hold the scheduled elections on time. There is no Somali who would countenance undue delays at this juncture of time. Do not plunge the country in a civil war,” he said.

Ali Mahdi pointed out that the government in power was mandated to serve 4 years and no more.

“I am not an active politician at the moment,” he said, adding “But I want a government that leads us fairly, justly. If I don’t find that, my white gun is still cocked and ready to fire. My statement on the matter is crystal clear”.

Ali Mahi was speaking at the opening of a conference of his clan – one of the two most dominant in federal Somalia which was designed – by its timing – to send a clearer political statement to the President who hails from the other half.

Many believe that the expulsion of the Prime Minister, Hassan Ali Kheyrre, last weeki through an engineered, hardly legal no-confidence vote of the parliament, wa designed to prepare the way for a two-year extension of term to the President after which the ousted PM can stand as a presidential candidate undeterred on Qatari support.

The opposition, mostly comprising leaders of the Ali Mahdi clan, stand no chance if the Qatari machinations prevails – and they know it.

The international community which bankrolls the regning government’s payrolls (eecutive, judiciary, legislative, army, policing,etc.) has sharply criticized the ill-veiled intentions of President Farmajo calling the PM removal unconstititutions and a slip that augured ill for their relations with the government they built and maintained on billions of Dollars of their taxpayers’ toils.