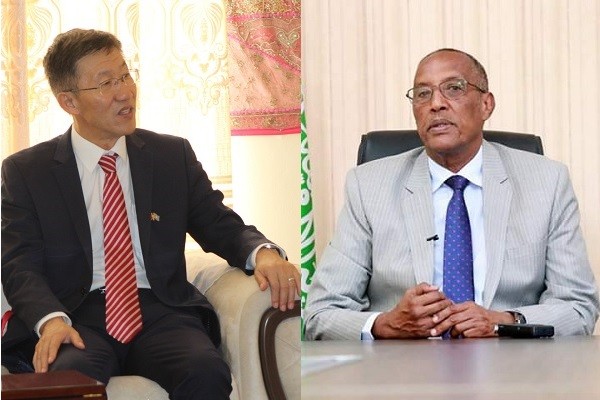 China offered included construction of roads and airport if Somaliland dropped Taiwan altogether. Somaliland told it ‘no’ and that China was welcome to forge parallel relations only

Somaliland’s president has reportedly rejected a conditional offer by a delegation of Chinese “wolf warrior” diplomats to cut ties with Taiwan, and added that he is taking steps to strengthen relations with the country.

On Monday (Aug. 3), news broke that President Muse Bihi Abdi has directed “close confidants” to examine ways of bolstering Somaliland’s relations with Taiwan, including “the possibility of mutual recognition between Taiwan and Somaliland.” On Tuesday, reports surfaced that a Chinese delegation would visit Somaliland on Wednesday (Aug. 5), while China’s ambassador, Qin Jian (覃儉), has reportedly been in the self-ruled state since Saturday (Aug. 1) attempting to arrange a meeting with Bihi.

Researcher and analyst Rashid Abdi on Tuesday posted a tweet in which he wrote that Qin “started putting on the ‘warrior diplomacy’ act and threatening Somaliland,” but that Bihi rebuffed his tactics and hours later ordered his ministry of foreign affairs to begin the process of recognizing Taiwan. Twitter account Somalia News on Wednesday stated local reports indicated that Bihi refused to meet with “the oppressive ambassador.”

On Thursday (Aug. 6), the Somaliland Chronicle cited government sources as saying that Bihi met with the delegation, which included Qin, for several hours. During the meeting, the Chinese side offered a development deal which included road and airport infrastructure projects and the installation of a liaison office in Somaliland on the condition that Bihi severs ties with Taiwan.

Bihi reportedly rejected the Chinese offer and informed them that rather than cut ties with Taiwan, his country is actually “working to strengthen diplomatic ties with Taiwan.” The newspaper on Monday reported the president has ordered an analysis of the TAIPEI Act, which was signed into law in the U.S. in March, and to present him with options and an assessment of “the pros and cons of unilateral recognition of Taiwan.”

What is of particular interest to Bihi is Section 3, Item 2 of the TAIPEI ACT, which states that the U.S. government should consider “increasing its economic, security, and diplomatic engagement with nations that have demonstrably strengthened, enhanced, or upgraded relations with Taiwan.” Bihi’s government may be particularly emboldened after the White House National Security Council (NSC) on July 10 posted a tweet lauding Taiwan for increasing its engagement in East Africa and included a link to a U.S. News & World Report article announcing the establishment of Taiwan-Somaliland ties.

In response to reports of Somaliland considering diplomatic recognition of Taiwan, MOFA spokesperson Joanne Ou (歐江安) on Monday said the ministry does not comment on reports by the Somaliland media that have not cited their sources. She added that MOFA and its Somaliland counterpart will “continue to consult on establishing future bilateral cooperation plans based on the principle of mutual benefit and reciprocity and to promote the economy and people’s livelihoods.”

When Tsai took office in 2016, she refused to recognize the 1992 Consensus and only acknowledged that the 1992 Taiwan-China talks were a “historical fact.” In response, China has been seeking to punish Taiwan by stealing away diplomatic allies through its debt-trap diplomacy tactics.

Since the outbreak of the Wuhan coronavirus (COVID-19) pandemic, Chinese diplomats have started to lash out at critics and attempt to intimidate their counterparts with a new “wolf warrior” ploy. The term “wolf warrior” refers to a Chinese propaganda film that depicts People’s Liberation Army (PLA) soldiers fighting foreign mercenaries who are led by a character named “Tom Cat.”