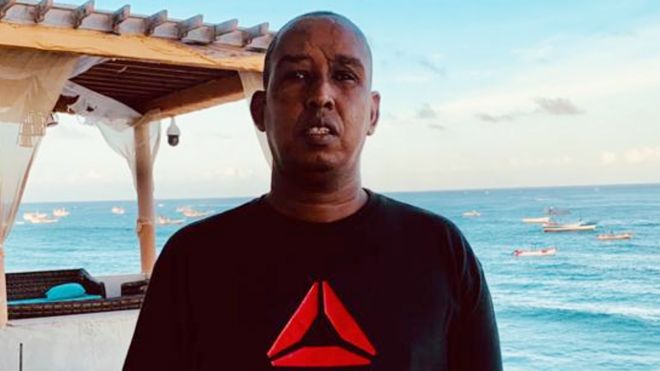 Former BBC reporter Mohamed Moalimu survived Sunday’s siege on a beachfront hotel in Somalia’s capital, Mogadishu – the fourth time he has been caught up in an attack by Islamist al-Shabab militants over the last seven years.

Moalimu, who now heads the Federation of Somali Journalists, told the BBC’s Basillioh Mutahi about his ordeal and how his friend was among the 20 people to lose their lives at the Elite hotel during the raid:

I was trembling. My heart was beating like a drum and my body was shaking. A huge cloud of dark smoke had gone up and it was even difficult to see the entire area.

People were screaming. I could see the impact of the blast. Some people had been hit by the shattered glasses, and some were bleeding, others were shouting for help.

My friend, Abdirizak Abdi, wanted to run away immediately. I wanted to stop him because heavy shooting was going on but he ran away from me, towards the entrance.

I waited up to the point where I could understand where the shooting was coming from, having been trained on what to do in a hostile environment.

I was very self-conscious and that actually helped me, because I checked what was going on. That is what saved me.

I knew where to rush to, and I ran in a zigzag way. I jumped up a wall and landed on the side where the hotel faces the beach.

I could not run immediately after jumping. People running away from the scene were being shot at.

I knew if you have anything coloured, like a shirt, it could easily attract the attention of the attackers. I had on a green T-shirt so I removed it and started to run on the beach. I was barefoot, having abandoned my shoes.

The shooting was still going on but I am lucky I survived.

Then I tried to call my friend but the call was not going through.

I tried to look for him, alive or dead. I saw a lot of people after the blast lying on the ground. Some of them were screaming. It was a very tragic scene.

The ambulances had started to arrive despite the fact that shooting was still going on. Somebody told me that Abdirizak had been injured and taken to hospital.

Unfortunately, he had been hit by the bullets from the terrorists who were firing indiscriminately. He was hit in the leg and the chest.

‘I ran to the hospital’

At that time, movement was limited and soldiers had taken over and lot of shooting was taking place.

Abdizirak, who was working at the Ministry of Information, had just a few hours earlier collected me from my home and we had driven together to the hotel. 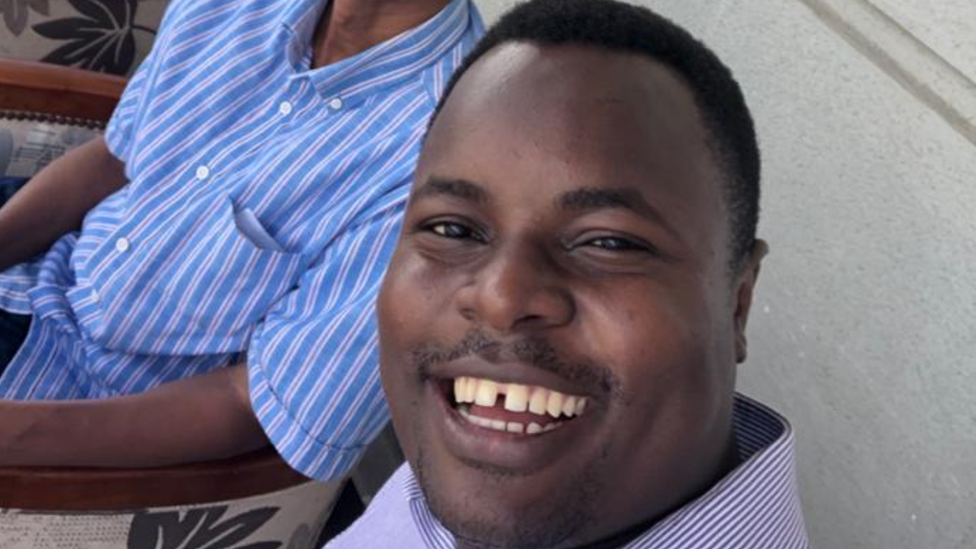 Imagine, somebody who was my colleague, a friend – we were only having a friendly chat and coffee that day – is now dead. He was dead in a few minutes”

Since cars were not allowed, I ran until I reached the hospital but unfortunately Abdirizak had been pronounced dead.

It was a terrible day – and the fourth time I have witnessed such a tragic incident in Mogadishu.

It is the only time I have not had any injuries.

In 2013 I was in front of the UN compound when al-Shabab attacked – a suicide bomb hit my car.

The other time was in 2016, near the hotel on Lido beach, where my face was badly injured.

I was lying in a pool of blood for more than two hours and it took many months being treated in hospitals here and in Nairobi and in London for my injuries to heal.

I got minor injuries from shrapnel all over my body, including on my hand. I escaped through a hole on the wall that had been created by the suicide car bomber.

But imagine somebody who was my colleague, a friend – we were only having a friendly chat and coffee that day – is now dead.

He was dead in a few minutes. You can imagine how tragic it was. I was not able to sleep at all. I tried to but I could not. It has affected me badly.

Almost 20 people have been confirmed dead, in addition to the four attackers and a suicide bomber.

‘My family couldn’t believe I was alive’

That’s a big number – people here in Mogadishu who work during the day usually have tea at restaurants in the afternoon.

I’m very concerned that this attack happened. I had hoped that things would improve.

My wife and family always advise me not to go to restaurants. Now I need to follow their advice because this is something that is not stopping.

This time my family was very worried because they knew Abdirizak was dead.

When I called them from the hospital, they could not believe that I was alive until they saw me.

They have found it hard to believe I escaped – for the fourth time.