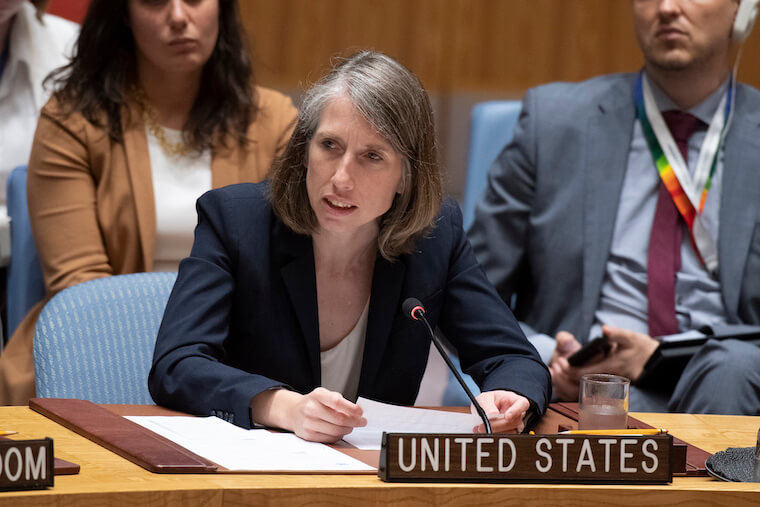 Thank you very much, Mr. President. And thank you, Special Representative Swan and Special Representative Madeira, for joining us today, as well as for your comprehensive updates and briefings. I also wanted to join you in welcoming our new Belgian colleague. It’s really good to see you in person although I know I saw you on the screen yesterday, but I wanted to welcome you officially.

Mr. President, Somalia sits before a moment of profound opportunity. The country faces difficult circumstances and security challenges to get there, however, including the attack on a hotel Mogadishu last weekend, which the United States condemns. We express our condolences to the victims and their families. This and other attacks highlight the need for Somalia to keep the upcoming elections on track, which are fundamental to advancing stability and security in the country. Uncertainty and delays in holding elections will have the opposite effect.

The challenges Somalia faces require concerted and unified efforts by its leaders. Unfortunately, the President and Lower House of Parliament’s withdrawal of confidence in the former Prime Minister and his government in July has only heightened political tensions. We are concerned such action has undermined the ongoing process of dialogue and negotiation between the Federal Government of Somalia, Federal Member States, and other key stakeholders.

We strongly encourage Somalia’s federal government and member states to hammer out a way forward for the upcoming elections. Elections need to be credible, timely, secure, practical, implementable, and built on broad-based consensus in a Somali-owned and a Somali-led process. We welcome the discussions underway in Dhusamareb and encourage the parties to reach agreement on a model that meets the criteria that can be implemented by early 2021.

The United States further encourages Somali authorities to maintain momentum on the reform efforts that brought about the re-establishment of ties with the World Bank and the International Monetary Fund in March 2020. Reaching the HIPC decision point is an important milestone for Somalia as it lays the foundation for inclusive economic growth, but such reforms must continue as Somalia seeks to build long-term inclusive economic growth and resiliency.

The United States is, and will continue to be, a close partner of Somalia. And Ambassador Osman, I meant to say earlier, it’s very good to have you in the Council with us. With more than $5.3 billion in bilateral foreign assistance over the last 20 years, we are working alongside the Somali people in support of improved food security, health care services, and water, sanitation, and hygiene. U.S. humanitarian assistance is helping Somalis overcome flooding, drought, locust infestation, and food insecurity affecting nearly half the population, with a quarter of the people also displaced by natural calamities and conflict.

The United States is also working alongside our Somali partners to mitigate the impact of COVID-19. Since the crisis began, we have provided more than $23 million to support Somalia’s COVID response, including for masks, hospital beds, testing center equipment, and communication efforts.

Finally, Mr. President, as other colleagues have highlighted this morning already, Al-Shabaab remains a destabilizing force in Somalia that has also repeatedly demonstrated the will and capability to launch attacks against neighboring states. We are encouraged that Somali and the AU Mission to Somalia, AMISOM forces have made progress on the battlefield, and that these military gains have been followed up with vital stabilization efforts to hold liberated territory. We do remain concerned, however, that implementation of key elements of the Somalia Transition Plan are behind schedule. We urge all parties to take the necessary steps to accelerate the transfer of security responsibilities to Somali military and civilian authorities.

The United States remains steadfast in its commitments to promoting peace and stability in Somalia, and to working with our international partners in assisting the country reach its goals for a peaceful and prosperous future.