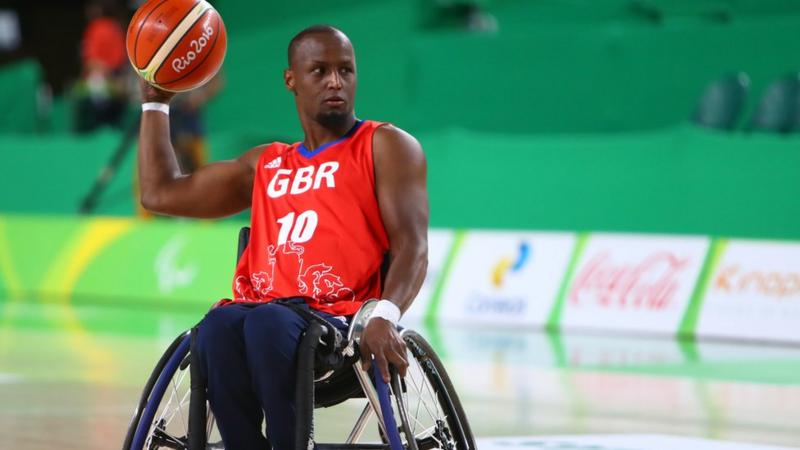 For wheelchair basketball star Abdi Jama, his Paralympic journey began four years before he made his debut in Beijing

“I went in 2004 to watch the Paralympics. I paid my own ticket, I paid my own way just to go and watch these guys play and my aim was, ‘I want to be in the next one.’ No matter what it took, I’m going to make the next one. So for me to go on to a basketball court, to train eight hours a day, if I had to, I was willing to do that.

Jama moved to the UK from the self-declared Republic of Somaliland when he was six. eight years later, he fell from a window leaving him paralysed.

He found wheelchair basketball after being encouraged to play by future GB teammate Ade Orogbemi.

“Not only did I grow up in Africa, I grew up in Toxteth which is a rough area in Liverpool. Not once did I grow up thinking I would get to the Paralympic stage and play at a Paralympic level.

Jama would fulfil his dream in 2008 at the Beijing games.

“You show the world that we are athletes, we’re not just disabled people.”

In wheelchair basketball, every player is assigned a point value based on their functional ability, from 0.5 (the most severely disabled) to 4.5, and the total on-court point value for each team should not exceed 14 during play.

Jama is a 1.0 player. Going into his first Paralympics, the Great Britain side were underdogs.

“I think fourth or fifth would have been an amazing achievement but then to come away with a bronze medal, I think we overachieved and it was absolutely amazing.

‘We were behind the US, Australia and Canada. We’d played a lot of games against them before and we had come up short.

“To beat the US, which going into the tournament, we had lost by 48 points to them. So imagine, we’re going into the group game, we had three of our main players down. They had some stomach bug or something so they couldn’t play. So we played with nine players.

So to come away with the victory was just unbelievable and that gave us the confidence in that group game to go on and actually push for that medal.

Britain lost to eventual champions Australia in the semi’s but beat the US again in the bronze medal match.

Beijing was a opportunity for Jama to improve and become a fixture in the British set up.

I went there just to enjoy the moment and I actually played really well and that gave me the eye-opening to push on and make me the player that I am now and gave me the actual platform to push on to the next one and next one.”

Jama has gone on to play around the world winning numerous titles on his way. The 2020 Paralympics in Japan would have given him an opportunity to complete the international wheelchair basketball set. A multiple European champion as well as a world champion in 2018, Jama is yet to win Paralympic gold on three attempts, missing out at the home London games in 2012.

“This year, there are people dying, people that are ill. For me it’s not been a challenge for me to reschedule everything and push on to next year.” Jama says.

“Hopefully the games go ahead and I get a chance to compete for that gold medal that I still haven’t got.”