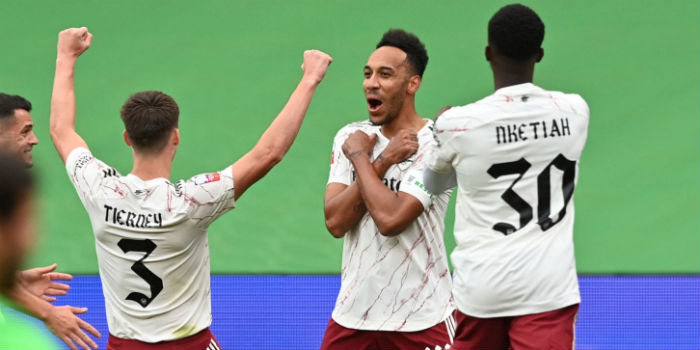 It was probably fitting that an empty-feeling, at times impressively intense Community Shield should finish with a penalty shootout. An even game had finished 1-1 after 90 energetic minutes. At which point it was Pierre-Emerick Aubameyang, current king of Wembley, who scored the winning penalty, ensuring the first trophy of the new season went to Arsenal, who also won the last trophy of the old one.

Rhian Brewster was the only player to miss in the shootout, having only just arrived on the pitch, spanking the ball a little wildly on to the bar. In truth neither team had really looked ready to win this game, although there were intriguing subplots. Arsenal’s impressive counterattacking reorganisation under Mikel Arteta continued. And Takumi Minamino not only scored his first goal for Liverpool, but dropped deep and found some unusual attacking spaces in the second half.

There was an air of sadness around Wembley at kick-off, as there has been at many of the empty sporting occasions of the last six months. Albeit perhaps not quite like this. Has there been a more quietly melancholy flag day in English football than a Community Shield with no community, the traditional curtain-raiser at a time when curtains are drawn, a season’s return on a rainy August day with the dregs of the last one still swilling around the bottom of the glass?

Not that Liverpool seemed to have noticed in the opening minutes. Some things, it seems, do carry on regardless. One of them being those simple, hard-running patterns of Jürgen Klopp’s champion team. Here Liverpool played the usual shape, with the promising Neco Williams at right-back.

Arsenal were a mix and match version of the wing-backs formation that has brought them some success. Mohamed Elneny returned for his first Arsenal game in 15 months. But it was Aubameyang who illuminated this game with 12 minutes gone.

Williams had already made a chance for James Milner with a lovely cross from the right, Milner heading clumsily over. Moments later Arsenal broke with thrilling precision. Bukayo Saka spread a pass from right to left into Aubameyang’s path. He drifted inside, leaving Williams looking a little mesmerised by that familiar shark-like glide. Four quick touches with the right foot took Aubameyang into the kill zone at the edge of the penalty area. The shot with his right was a thing of beauty, swerving in a lovely soft arc outside Alisson’s left hand and into the corner.

Arsenal hd played like this against Manchester City in the FA Cup final, sitting in a deep double bolt and breaking with precision. They almost scored again five minutes later as Eddie Nketiah robbed Joe Gomez just outside the centre circle, took the ball back from Saka but saw his low shot saved in extremis by Alisson.

On his touchline Klopp looked pensive in red and white baseball cap and Wembley-grey athleisurewear suit. Mikel Arteta was, as ever, a whirl of frantic energy, one hand stuffed into his pocket, the other endlessly pointing and flexing, like a man in a disco trying desperately not to dance. An empty game in an empty ground – but this was a wonderful start for Arsenal’s manager, two well-drilled homegrown attackers with a combined age of 39 pulling the Liverpool defence into uncomfortable shapes.

After which Liverpool began to open the throttle, but struggled to find any real clarity close to goal. Ten minutes before half-time a period of sustained pressure brought a wonderful whipped cross from the left by Andy Robertson that fizzed between goalkeeper and defence. There were endless lunging Arsenal blocks as at times the game had rhythms of a one-way giant-killing FA Cup tie. At one point Liverpool won four corners in rapid succession.

But Granit Xhaka and Elneny held the ground in the middle, Nketiah was a waspish, workaholic presence up front, constantly worrying away at Virgil van Dijk. And Arsenal went to the break looking happier at 1-0, a team whose gameplan was slotting into place.

Liverpool found more space at the start of the second half as Arsenal had a little more possession. On 55 minutes Sadio Mané made a wonderful run in behind Rob Holding on to Robertson’s pass, but saw Emiliano Martínez make a fine close range save as he went to slip the ball into the net. Shortly after Milner was booked for a late, cynical lunge at Nketiah’s ankle as he span away into space.

With half an hour to play Minamino came on and immediately looked bright, offering a slightly different set of movements to those familiar surges down the flanks. There was a spin and shot from deep. And finally it was Minamino who scored the equaliser on 73 minutes.

Liverpool’s attack had rejigged into a three-man trident behind Roberto Firmino. As they pressed again Minamino got close to Mohamed Salah, exchanged passes, took a deflection back off the body of his teammate, then shifted his feet neatly in the tiniest of spaces to roll the ball past Martínez. It was a smart finish, and more importantly a fine piece of inventive interplay with Salah, who had weaved inside before swapping passes.

Minamino was dropping deep and playing as a kind of roving No 10 at times. Liverpool have perhaps lacked this kind of threat when teams defend deep, the player who moves in less predictable patterns, who enjoys finding space between the compressed defensive lines. But Arsenal held on, and were, on balance, deserved winners.