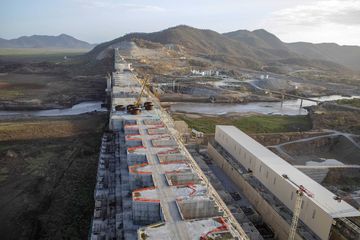 An Ethiopian diplomat says his country has asked the United States for clarification on a report that Secretary of State Mike Pompeo has approved cutting up to $130 million in aid to Ethiopia because of the country’s dispute with Egypt and Sudan over a massive dam it is building on the Blue Nile.

Fitsum Arega, Ethiopia’s ambassador to the U.S., tweeted Monday saying he has heard the aid cut is related to the Grand Ethiopian Renaissance Dam and that the clarification is expected from the U.S. later Monday. He added that his country is determined to complete the dam, saying that “we will pull Ethiopia out of darkness.”

The planned cut was reported by Foreign Policy late Thursday, setting off an uproar among some in Ethiopia, a regional security ally of the U.S. A State Department spokesperson on Friday said they had no announcements on U.S. assistance “at this time.”

The spokesperson added that “we believe that past work by Egypt, Ethiopia, and Sudan shows it is still possible to reach balanced and equitable agreement in a manner that takes into account the interests of the three countries. … We reaffirm our commitment to remain engaged with the three countries until they reach agreement.”

Africa’s largest hydroelectric dam has caused severe tensions with Egypt, which has called it an existential threat and worries that it will reduce the country’s share of Nile waters. Ethiopia says the $4.6 billion dam will be an engine of development that will pull millions of people out of poverty. Sudan, in the middle, worries about the effects on its own dams though it stands to benefit from access to cheap electricity.

Years of talks among the countries have failed to come to an agreement. Key remaining issues include how to handle releases of water from the dam during multi-year droughts and how to resolve future disputes.

Pope Francis recently urged Egypt, Ethiopia and Sudan to continue talks amid regional concerns that the dispute could lead to military conflict.

The U.S. earlier this year tried to mediate the discussions, but Ethiopia walked away amid accusations that Washington was siding with Egypt. Now the three countries are reporting any progress to the African Union, which is leading negotiations.

The dam’s 74 billion-cubic-meter reservoir saw its first filling in July, which Ethiopia’s government celebrated and attributed to heavy rains. Ethiopia had said it would fill the dam with or without a deal with Egypt and Sudan.