Mohamoud Hashi Abdi, a long-standing politician and one of the best-known leaders and founders of the Unity and Development party – Kulmiye, today, boycotted participation of the on-coming convention, accusing the President-cum-Chairman of early rigging tailored to his whims and personal wishes alone.

Mr Hashi, at a press conference, he held at the Ambassador Hotel, declared that he will not rest until the constitution and traditions of the party ruled uppermost once more.

In, yet, the most stringent critique to President Bihi’s double leadership as President and Chairman of the ruling party since he ascended to power in late 2017, Mr Hashi articulated what he viewed was wrong with how the convention was being organized.

“I haven’t abdicated of my ambition to lead Kulmiye Party as its next Chairman. On the same token, I have not submitted any application towards this end to the Preparatory Committee the President nominated for the Convention. It is so because I believe President Bihi, the current Chairman, has hijacked the whole set up to fit it to how he wanted it in complete disregard of the Party constitution, bylaws and traditions,” he said.

“The Convention will only be nominally re-electing a person who is already elected even before it was convened,” he said.

He said he chose not to be a best man at an event that only missed the ululations of an approving mass.

Mr Hashi accused the President, who doubles up as the party Chairman, of reneging on public vows that he would transfer chairmanship of the party once he won the Presidency.

“The incumbent President has promised at one of his more popular rallies that he will transfer Chairmanship of the party once he was elected to the Presidency. He did not, Instead, he went back on his word and the undertaking he conveyed to party supporters,” Mr Hashi pointed out.

Hashi recalled that his predecessor and the founder of the Party, Ahmed Mohamed Mohamoud ‘Siilaanyo’ ceded chairmanship of the winning party as soon as he was sworn in to the Presidency in late 2010.

“President Bihi’s avowed promises rested on the party’s traditions. He was the Chairman of the Party during the whole tenure of the former Kulmiye government. It was an arrangement that allowed the government to serve the people while the party was run by a core of executives which the then Chairman, Bihi, led. He should have upheld that tradition and the vows he made to the party support base,” he said.

Hashi pointed out that Kulmiye is the only party among Somaliland’s political parties which won two elections and two presidencies because of its strong, democratic principles and unbudging, loyal supporters.

Mr Hashi accused the incumbent president-cum-chairman of turning the party to an own fiefdom since he neither transferred the party leadership nor encouraged any open competition for the post since he took office nearly three years ago,” he said.

Mr Hashi, the Presidency Minister of the government on whose support President Bihi won the Palace, also, censored the President for turning his back on the leaders and founders of the party as well as its stalwart supporters who fought tooth and nail to put him to power once he assumed office.

” The President and his inner circle have torn the party into two camps of their making: Neo Kulmiyites and Old Kulmiyites. Those of us who founded the party or were prominent members of the party or sitting ministers of the former government are the Old Kulmiyites, according to Bihi and his cronies – disowned and disfavored. People who had never put in a complete day’s work for the party well-being who are close to him are now calling themselves the Neo Kulmiyites. That is who our president and the Chairman who wants to be re-nominated to the Chairmanship of the Party is,” Hashi said.

Mr Hashi also spoke of the illegitimacy and unfairness of how the President-cum-Chairman has been treating his Vice President who is currently the fourth Vice Chairman of the Party.

The President, he said, favoured his current Minister of Trade, Mohamoud Hassan Sachin, over Minister Mohamed Mumin Seed and the Vice President, himself.

The Preparatory Committee also denied Ex-Minister of Planning, Mohamed Ibrahim ‘Qabyotire’ him application and declaration of candidacy for the Second Chairman of the party on Saturday. Hashi called the incident lamentable.

‘That is another example of how far down party ethics and democracy have degenerated,” he said.

Both Ministers, Hashi and Qabyo, were among a core of Kulmiye leaders who unconditionally supported and accompanied the then-candidate, Bihi, on all his country-wide campaigning rallies helping sway voters to his favour.

Mr Hashi, illustrating why he found President Bihi’s dual leadership wanting, quoted an old saying which said ‘ Two things define you: your patience when you have nothing and your attitude when you have everything’.

“The President should have devoted himself to serving the nation, healing wounds, uniting fragmentations where he was according an unholy amount of attention to petty rivalries and intentional disenchantment of the party’s loyal supporters,” he said.

“Moreover,” he added, “President Bihi and his government started unfounded prevarications and allegations of corruption directed against the very people who hoisted up to power and a government that was built on a Kulmiye ticket – the same as his”.

“It is noteworthy,” he said, “that the government which President Bihi and his government so abnegated of worthy achievement, so falsely accused of corruption has handed over to him a government that did not owe a single employee or security officer a cent in salary arrears, a loyal party support base and a united nation. What can he or his government have to account for the three years that he was at the lead which can compare to the former’s?” he added.

The type of negligence to party affairs which suffered to the absence of governmental and party lines of responsibilities to which Mr Hashi alluded, in fact, showed, in two vital reference portals: the Party official website (www.kulimye.org)  and Wikipedia.

Looking up information on the party, the first showed that the Kulmiye power base, contrary to facts on the ground and its history, was limited to only two clans in the country. Kulmiye supporters, in fact, spanned across all areas regardless of where and to whom they belonged.

The party, contrary to all expectations, stated that the core party team in its structure were a Mr Douglas Adams, Business Analyst, Lisa Kudrow, Volunteer, and Sam Woods, Political Activist (http://www.kulmiyeparty.org/the-party/party-team-chart/). 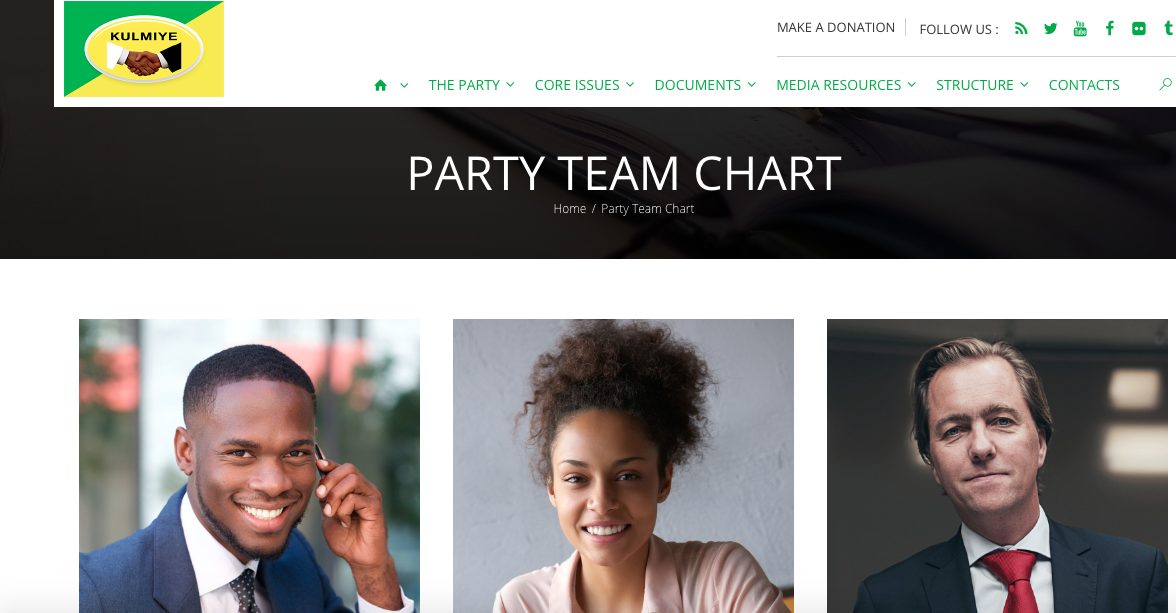 The Party emerged on to the political platform in 2002 after defeating a number of political associations among which was ‘Sahan’ to which Musa Bihi Abdi was a leading member ahead of the municipal councils’ election.