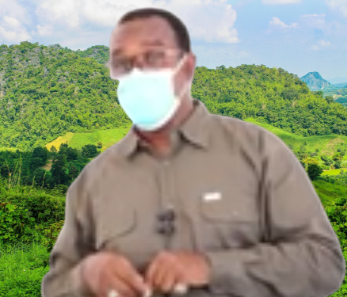 The Republic of Somaliland’s Minister for Information and National Guidance, Suleiman Yussuf Ali Koore, declared, today, that he tested positive of coronavirus.

Minister Koore, currently on peace and mediation tour in the Sool region, was tested by a diagnostic lab recently delivered to the region.

Koore said he was not any worse than he was before the test and that he was in excellent health despite the discovery of his condition.

“I will not stop dispensing my national obligations and especially as regards the mediation process we have been actively engaged on in the region,” he said.

Koore added that the delegation he was part of, along with Professor Yassin Mohamoud Hiir ‘Faratoon, the republic’s Minister for Foreign Affairs and International Cooperation, has already put much of that task behind it.

“We have successfully wrapped much of the mediation activities between brotherly clans in the region and, in this regard,” he said, “he was not worried about his condition hampering his attention to the task in hand”.

The Minister, who is also a member of the National Preparedness Committee for COVID-19, cautioned the nation to not believe that the virus has gone.

“This pandemic has severely and adversely brought the whole world to its knees. It is still raging and has re-intensified in many parts of the world,” he said.

The minister advised that the nation should continue taking every precaution to avoid a more intense re-emergence of the virus which, in prevailing conditions, could prove devastating and fatal.

Minister is the first Minister who had officially declared his condition since the onset of the pandemic late last year.

Somaliland has for a short time enforced preventive measures but, then, lapsed back to its pre-Covid, free social interchange. Life in Somaliland doea not show the least indication of how dangerous and deadly tje virus still is.

According to a report released by the Deep Knowledge Group on 23rd August, Somaliland is in 251st place while Western Sahara is the most dangerous region in the world and sits at 252nd. Somalia is on 247th, Ethiopia is on 159th, Djibouti is on 242nd, and Kenya is on 109th.