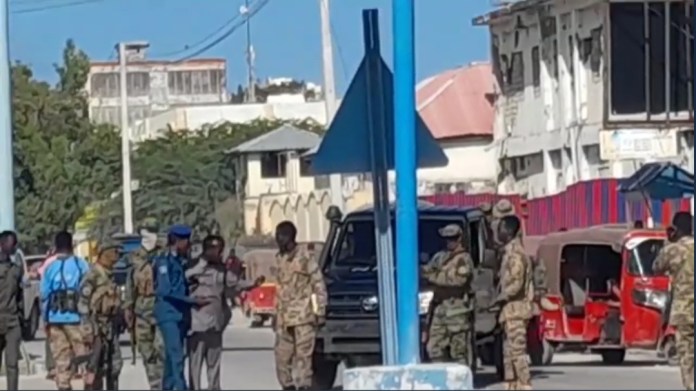 Soldiers attached to the National Intelligence Security Agency [NISA], Somalia’s spy agency, staged a mutiny in the streets of Mogadishu on Wednesday, citing lack of payments and responsiveness from the government as some of the underlying factors which necessitated their actions.

The about 100 soldiers marched in the streets of Mogadishu causing a temporary traffic snarl as they criticized their employer, the Federal Government of Somalia of deliberately diverting resources to political campaigns despite the fact that they are yet to be paid their dues.

Some who spoke to the local news reporters said they have gone for over three months without pay despite offering services. They accused authorities of failing to address their concerns, adding that they will down their tools until they are paid fully.

The soldiers, mostly picked from among the spy agency blocked major roads leading to the city as they expressed their fury for the delay of their salaries. However, their march was orderly as there is nobody who fired or even harassed civilians who were carrying out their routine businesses.

“We cannot work and go without pay for all these months. It’s time that we work together as a team and have our rights respected. When you work, you expect to pay but in our case, it’s different and we don’t know why they don’t want to pay our dues,” argued one of the soldiers who didn’t reveal his name.

According to the soldiers, who later on blocked the main road leading to Villa Somalia, the official residences of President Mohamed Abdullahi Farmajo, they suspect that commanders have embezzled funds meant for payment of their salaries, and have since given ultimatums for clearance.

The NISA team under the stewardship of former Al-Jazeera journalist Fahad Yasin is yet to respond to the claims. The FGS, which usually responds through the Ministry of Information, is also yet to issue a statement in relation to the incident which could create ripples within the security sector.

NISA is responsible for the collection of intelligence whether political, social, or economic which impacts directly the security of the country. For months now, opposition leaders have been calling for the resignation of Yasin, a trusted lieutenant of President Mohamed Abdullahi Farmajo, accusing him of misuse of his “privileges”.

This is not the first time security forces are waging a mutiny over unpaid salaries. Early this year, members of the SNA protested in Mogadishu over similar claims but General Odowaa Yusuf Rageh, the Chief of Defense Forces, said those affected had not been captured in the biometric registration.

With the country battling effects of the civil war and endless Al-Shabaab attacks, the government merely depends on international lenders and partners for aid. For instance, the SNA troops are funded majorly by the European Union, the US, and other partners who have been pushing for peace and stability.