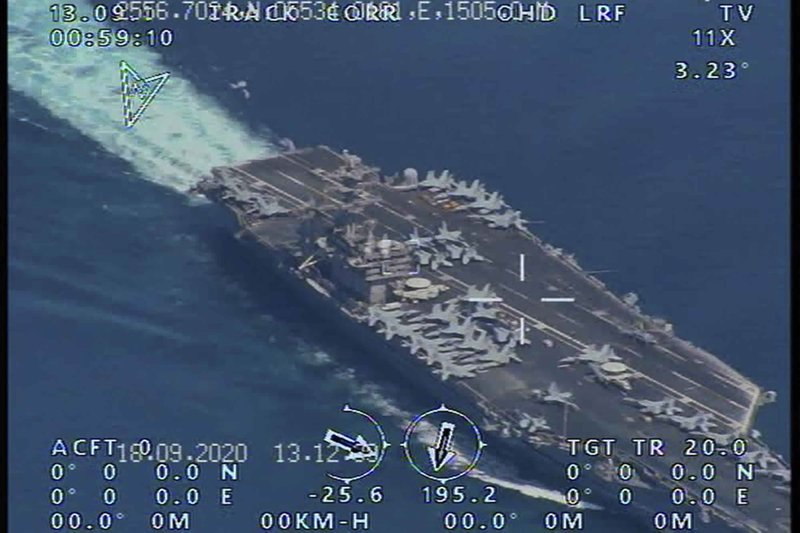 Iran’s powerful Revolutionary Guard force has managed to fly a surveillance drone over the USS Nimitz aircraft carrier which last week transited through the Strait of Hormuz, an Iranian news agency said Wednesday.

The semi-official Tasnim news agency, which is considered close to the paramilitary Guard, published images of the Nimitz, saying they were taken by Iranian-made drones, and showing fighter planes parked on the carrier’s deck.

The Nimitz, and several other warships, passed last Friday through the Strait of Hormuz, the world’s most important chokepoint for oil shipments, the U.S. Navy had said in what was described as a “scheduled maneuver.”

The U.S. Navy’s Bahrain-based 5th Fleet, which oversees patrols across Mideast waters, declined to comment on the Iranian report on Wednesday.

Earlier in the day, the Guard took over delivery of surveillance drones from Iran’s defense industries. At a ceremony marking the event, Gen. Hossein Salami said the power of the Guard’s navy stems from its combination use of drones, helicopters, aircraft and its vessels.

Over the past decade, the Guard has occasionally published images on the U.S. vessels in the Persian Gulf, where the force has been in charge of protecting Iran’s interests since 2007. In 2019, similar images were published, reportedly from a Guard drone that flew over the USS Dwight D. Eisenhower and another American warship in the Persian Gulf.

Tensions between Iran and the U.S. continue to simmer. The U.S. withdrew from the 2015 nuclear deal between Iran and major world powers and imposed new, tougher sanctions on Iran that sent the country’s economy into free fall.

“We are in war, we are in an economic war,” Iranian President Hassan Rouhani told in a Cabinet meeting on Wednesday, citing the U.S. sanctions as the cause of the economic warfare.