President Trump’s vital signs were “very concerning” over the last day and he is not out of danger, the White House chief of staff said on Saturday, contradicting a rosier picture painted by the president’s doctors on television just minutes before.

And in a four-minute video posted to Twitter on Saturday evening, Mr. Trump said he was “starting to feel good,” but added that the severity of his case would probably become apparent over the coming days. The video, meant to reassure the nation, showed him sitting at a conference table at the hospital and wearing a suit jacket but no tie.

“You don’t know, over the next period of a few days, I guess that’s the real test,” he said. “So we’ll be seeing what happens over those next couple of days.”

Mr. Trump said he “wasn’t feeling so well” when he arrived at Walter Reed National Military Medical Center, but said “I feel much better now” and that he expected to return to work shortly.

The White House physician, Dr. Sean P. Conley, said later Saturday night that the president had made “substantial progress since diagnosis.” Mr. Trump was “fever-free and off supplemental oxygen,” Dr. Conley said after he had declined earlier on Saturday to say whether the president had been on oxygen at any point since being diagnosed with Covid-19.

“While not yet out of the woods,” Dr. Conley said, “the team remains cautiously optimistic.”

While the president’s doctors had maintained earlier Saturday that Mr. Trump was “doing very well” and in “exceptionally good spirits” after his first night in the hospital with the coronavirus, Mark Meadows, the chief of staff, provided a more sober assessment and warned that the next two days would be pivotal in determining the outcome of the illness.

“The president’s vitals over the last 24 hours were very concerning and the next 48 hours will be critical in terms of his care,” Mr. Meadows told reporters outside Walter Reed, where the president was flown on Friday evening and will remain for at least a few days. “We’re still not on a clear path to a full recovery.”

Mr. Meadows’s remarks were attributed to a person familiar with the president’s health in a pool report sent to White House journalists in keeping with ground rules that he set for the interview. But a video posted online captured Mr. Meadows approaching the pool reporters outside Walter Reed following the doctors’ televised briefing and asking to speak off the record, making clear who the unnamed source was.

The comments infuriated the president, according to people close to the situation, and he intervened directly to counter the perception that he was sicker than the White House has admitted. Within hours, he posted a message on Twitter saying “I am feeling well!” and called his friend and personal lawyer Rudolph W. Giuliani to have him convey a message to the outside world. “I’m going to beat this,” Mr. Trump told him.

Mr. Meadows called into Fox News on Saturday night, knowing the president was most likely watching, and praised his “unbelievable courage” and “unbelievable improvement.” But he also confirmed that Mr. Trump’s condition on Friday was worse than originally described. “Yesterday morning we were real concerned with that,” Mr. Meadows said. “He had a fever and his blood oxygen level had dropped rapidly.”

The mixed messages only exacerbated the confusion and uncertainties surrounding the president’s situation. During their briefing on Saturday, the doctors refused to provide important details and gave timelines that conflicted with earlier White House accounts and left the impression that the president was sick and began treatment earlier than officially reported.

Two people close to the White House said in separate interviews with The New York Times that the president had trouble breathing on Friday and that his oxygen level dropped, prompting his doctors to give him supplemental oxygen while at the White House and transfer him to Walter Reed where he could be monitored with better equipment and treated more rapidly in case of trouble.

During the televised briefing, Dr. Conley said the president was not currently receiving supplemental oxygen on Saturday but repeatedly declined to say definitively whether he had ever been on oxygen. “None at this moment and yesterday with the team, while we were all here, he was not on oxygen,” he said, seeming to suggest that there was a period on Friday at the White House when he was.

Dr. Conley likewise appeared to indicate that the president was first diagnosed with the virus on Wednesday rather than Thursday night, before Mr. Trump disclosed the test on Twitter early Friday morning. While describing what he said was the president’s progress, he said Mr. Trump was “just 72 hours into the diagnosis now,” which would mean midday on Wednesday.

Just two hours later, the White House issued a statement it said was written by Dr. Conley trying to clarify. “This morning while summarizing the president’s health, I incorrectly used the term ‘72 hours’ instead of ‘Day 3,’” it said.

Dr. Conley also said that on Thursday afternoon “we repeated testing and, given clinical indications, had a little bit more concern.” Late that night, he said, “we got the P.C.R. confirmation that he was” positive. Mr. Trump attended campaign events on both Wednesday night and Thursday without wearing a mask and gathering hundreds of supporters who likewise were not taking precautions against the virus.

Dr. Brian Garibaldi, another physician treating the president, also said that Mr. Trump had received an experimental antibody therapy “about 48 hours ago,” which would have been midday Thursday — before the confirmation test Dr. Conley said came back positive that evening and a full day before the White House disclosed the treatment on Friday.

The confusion came from a briefing where Dr. Conley and his team offered a relentlessly positive assessment of Mr. Trump’s condition. “This morning the president is doing very well,” Dr. Conley said. “At this time, the team and I are extremely happy with the progress the president has made.”

The doctors said Mr. Trump had been free of fever for 24 hours and had blood pressure and heart rates that were normal for him. Asked why he moved Mr. Trump to the hospital, Dr. Conley said, “Because he’s the president of the United States.”

Dr. Sean N. Dooley, another physician on the team, said Mr. Trump was feeling optimistic. “He’s in exceptionally good spirits,” Dr. Dooley said. He added that the president told his doctors, “I feel like I could walk out of here today.”

In his rambling video statement, Mr. Trump looked wan and sounded less energetic than usual. At one point, he offered a muddled explanation for his behavior that was not entirely clear whether he was talking about his decision to go to the hospital or to keep campaigning in recent months despite the pandemic. “I had no choice,” he said. “I just didn’t want to stay in the White House.” He added: “I can’t be locked up in a room upstairs and totally safe and just say, hey, whatever happens, happens. I can’t do that. We have to confront problems”.

Tracing Trump’s Contacts Before He Tested Positive for Coronavirus 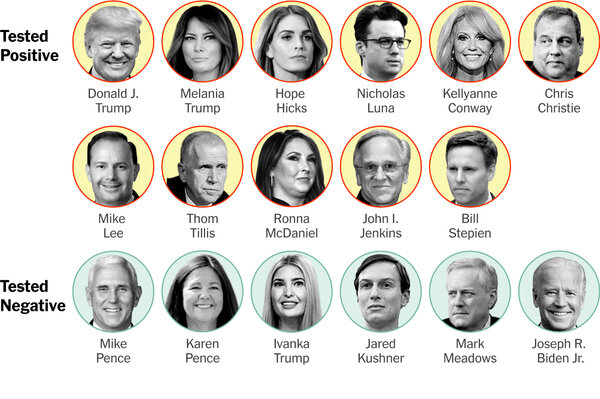 Tracing Trump’s Contacts Before He Tested Positive for Coronavirus

A visual guide to the president’s movements and contacts in the days before he announced his positive test for the coronavirus.

Why Did Somaliland Suspend Relations with the UN?