The Ministerial cabinet of the Republic of Somaliland, today, warned citizens not to be pulled into Somalia so-called ‘elections’ or else face consequences.

The Cabinet, during its weekly Thursday meetings, stated that anybody who willingly partakes in the Somalia selection processes for parliament will be criminally culpable.

‘The statement from Mogadishu which claims that Parliamentary MPs representing Somaliland will be selected from in Hamar (Mogadishu) is an affront and an slur intentionally directed against Somaliland,” the Cabinet Communique’ noted.

“For Somalia, of late, aspersing Somaliland sovereignty has been a habit but this latest assault is much more profound,” the statement added.

The communique underlined that any Somalilander who stooped down to participate in Somalia’s calculated slight of Somaliland sovereignty has, in fact, committed a disservice against his/own own integrity as well as that of the home country.

“Consequently,” the Communique established, ” anybody who partakes in the make-belief representation played out in Mogadishu would be deemed a violator of the joint Parliament Houses (Criminalizing the move) and the laws and regulations of the country and would, as such, face a criminal indictment by their act”.

Somaliland prohibited political participation and all types of related interaction with Somalia in a joint session of the republic’s bicameral parliament in 2003 during the reign of the third president of Somaliland, Dahir Rayale Kahin.

The resolution was later amended during President Ahmed Mohamed Siilaanyo’s term to permit the government to participate on talks between the two sides which, otherwise, would have been virtually impossible.

Somalia, in a meeting its 6 presidents recently concluded in Mogadishu, again included Somaliland in an election roadmap they charted. The resolution stated that MPs representing Somaliland in both the Lower and Upper houses of the federal parliament will be selected own Mogadishu.

Mogadishu had no jurisdiction over Somaliland since 1991 when the Republic of Somaliland was born reclaiming the sovereignty it ceded to Somalia in an ill-fated, costly merger which lasted from June 1960 to January 1991.

Somalia has, time and again, asked the international community which supports the weak, tottering government in Mogadishu, to not humor Somalia on its myopic, brazen, fictitious claims over Somaliland.

Thus far – for reasons unbeknown, the international community continues to bankroll self-destructive moves on the part of Somalia which augurs ill for Somaliland-Somalia future relations in the worst possible consequences. 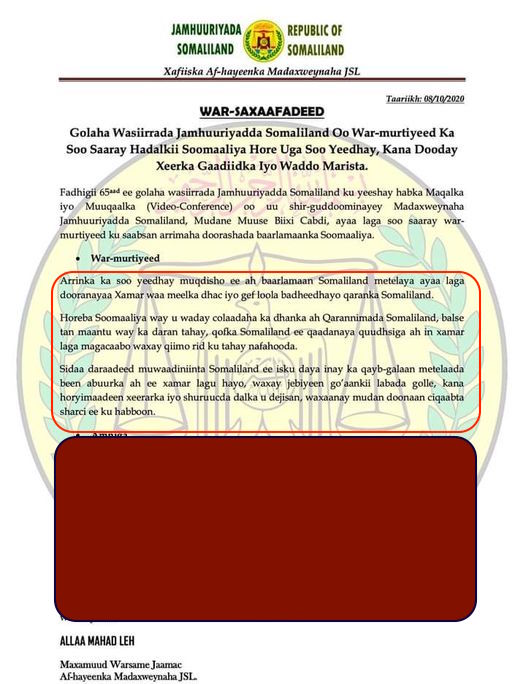