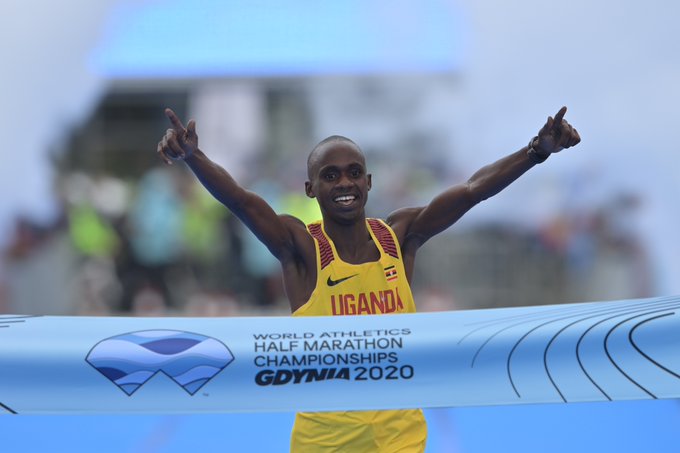 In the end, just three seconds separated the medallists.

Kenyan Jepchirchir broke her own women’s only (rather than mixed with men) world record with a sixty-five minute and 16 second run for the win. She held the previous record which she took in September at 65:34 in Prague. Her best is slightly faster at 65:06.

During the race, Jepchirchir, after having led a pack of six or seven runners had entered the fourth and final lap of the course hanging slightly back as Joyciline Jepkosgei led the race.

Unfortunately, Yehualaw stumbled 20m from the line on the boarding laid down on the concrete over the final stretch, allowing Kejeta Ethiopian-German to finish second in a European record time of 65.18, with Yehualaw finishing one second behind her.

Kejeta is the first European to medal at the World Half Marathon Championships since Lornah Kiplagat pulled it off as the Kenyan competed for the Netherlands in 2008.

In the end, six women ran on 66 minutes, five more under 68. Sixteen ran under 70 minutes. Eight national records and one (wo) world records were set in the women’s race.

Joshua Cheptegei has broken three world records this year, the 5K road, and 5000m and 10,000m track distances. So, it was expected that he may pull the trick for his fourth world record at the World Athletics Half Marathon Championships. He didn’t. In fact, he finished fourth overall – but it was still a great performance.

There was an exciting change of leads during the final two kilometres between Kenya’s Kibiwott Kandie and Kiplimo before the 19-year-old took the lead for good.

It was also Uganda’s first-ever medal from the championships.

Kandie ended up finishing in the time of 58:54 for second place with Ethiopia’s Amedework Walelegn taking third in a personal best time of 59:08.

Pre-race favourite Cheptegei came in fourth in the time of 59:21. The race was his debut at the distance.

“It was a good race and I enjoyed the course. It was my first time at the World Half Marathon Championships and I won!” said Kiplimo.

The men’s race had a slow start with the lead pack hitting five kilometres in 14:19, which suggested that the race would be tactical and world record attempts were out the window – they would need to run around 13:35 for that to happen.

Cheptegei, led the leaders through 10K in approximately 28:25 seconds.

As they approached 15K Kandie and Ethiopia’s Guye Adola dropped the pace.

The race turned into a Kenya versus Uganda battle with Kandie and Kiplimo going head to head and Cheptegei within reach within the final 5K loop – the race was on.

Over the final 2K or so, the athletes traded leads with Kiplimo prevailing with a thrilling surge over the final km to win by five seconds.