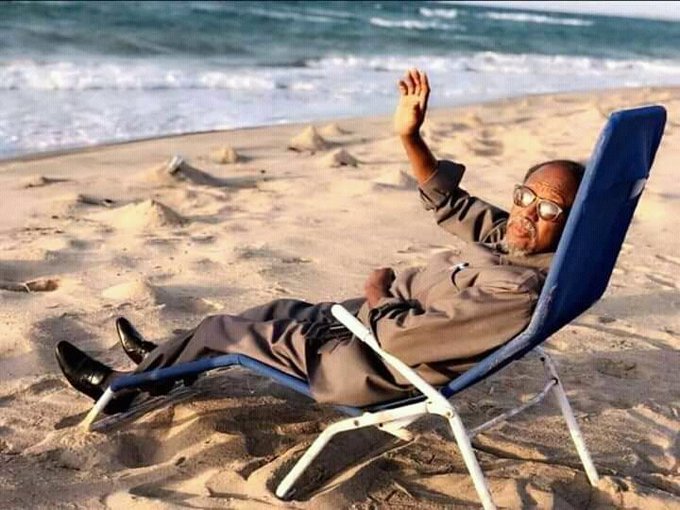 Akin to all Somalis, I am overcome with threnody feeling over the sudden death of Dr. Ali Khalif Galaydh. In the past week, then, I have been trying to come to terms with: (a) what the death meant to me at the personal level, and (b) the implications of such a monumental loss for the Somali people as whole and, in particular, the denizens of the Republic of Somaliland. These brief notes that follow, then, are preliminary meditations. A more detailed review will have to wait for another and more appropriate occasion.

As one of the earliest and a handful cohort of formally educated Somalis who obtained a doctoral degree (Syracuse University, USA), I heard of Dr. Galaydh’s name on numerous occasions, while my own brief career as junior broadcaster was underway with the BBC Somali Service in London at the very end of the 1960s and the beginnings of the 1970s. Already a highly placed civil servant, he came through London in the summer of 1971. At that time, a senior member of the Somali Section invited me to come along for a visit with Dr. Galaydh at his hotel at the heart of West End in the city. We met Dr. Galaydh at the lobby, and he looked youthful, dignified and cosmopolitan. He welcomed us to sit with him in a comfortable corner of a large and elegant room. After the introductions were done and the high-tea afternoon service arrived, I listened to him attentively as he described his official mission to the USA and his upcoming return to Mogadishu. Being, as it were, such a greenhorn, I was instantly taken by his calm demeanor, friendly approach, capacious intellect, articulate ease with, and a fine interchangeability of,  the English and Somali languages, and a palatable excitement about his professional work back in the Somali Democratic Republic. In the end, he left with me a strong feeling of a confident and highly able professional, and with a promise of a glittering future. I took a great deal of inspiration from that meeting, including a possible move to the USA to enter a university someday. While in Burao in the middle of last year, during the unforgettable Daboob lectures (on the grand theme of inclusive civic belonging and unity) tours, I reminded Dr. Galaydh of that meeting of nearly five decades ago. He smiled with reassuring fondness — though, I am quite certain, I was too young and  ephemeral at that moment to have created a lasting impression on him!

My second encounter with Dr. Galaydh was in a totally defiled Mogadishu and country by tribalistic, utilitarian and petty calculations, violence, and repine. This was early in 2012. I was running as the presidential candidate of the Somali Republic for Hiilqaran Party; Dr. Galaydh was up for the speakership of the national parliament. We stayed at the same nice hotel (Nasahablod One) and had numerous opportunities to discuss various and seminal issues that pertained to the condition of the Somali people. Dr. Galaydh’s ruminations were comprehensive and sagacious. He expressed a deep yearning for the resurrection of the Somali Republic — one in which, in his words, “civic sanity and fairness returned, empathy with each other was reignited, competence has gotten its due again, pan-Somali purpose was in full swing for rebuilding national institutions, and collective decorum and gravitas were re-cultivated.” In the same breath, there was a sense of painful despair in his voice to such an extent that he felt that positive history might have passed by the Somali people. In the end, our respective campaigns lost. A few months later, and back in the Twin Cities, we convened two evenings of public presentations that each of us laid out what we had experienced and what would be our individual decisions for the future. I resigned right away from my seat as a member of the national parliament; Dr. Galaydh followed suit a year later. Our common perspective was this: Mogadishu politics made the past meaningless, the present a cruel farce, and the near future an exercise in utter futility.

The third time that I had the pleasure of engaging Dr. Galaydh was in Somaliland in 2017. With his return to Somaliland as the selected leader of Khatumo, we had a number of rigorous and extensive conversations in Hargeisa. He was now crossing a new Rubicon — that is, a high-level negotiation with the leadership of Somaliland to secure a judicious reconciliation with Khatumo. The ultimate purpose was to fully reintegrate, as co-owners, the people of Sool region into Somaliland, with all the appropriate rights, privileges, and obligations.

I was delightfully on board with regard to this crucial breakthrough. Dr. Galaydh and I met with the President-Elect, Mr. Muse Bihi, at least on two occasions, in late 2017, that lasted many hours. All three of us agreed that Dr. Galaydh will write up the most important and specific issues (mined from the earlier agreement between Khatumo and President Ahmed Mohamed Mohamoud’s Government) – concrete items that separated between kernel from the shell and, consequently, he deemed most important to be implemented by the new Kulmiye regime in Somaliland. My last conversation with Dr. Galaydh was five days before his unexpected death in Jigjiga. At the time, he informed me, with sharp clarity and deep dismay, that the leadership in Somaliland was “cold and dilly-dallying.” Consequently, NOTHING much, he asserted, has been implemented thus far. He promised to brief me when he returns to the Cities in a few weeks. As you all know now, this was NOT to be. Still, and notwithstanding his profound melancholy, there were epiphanic moments when he would expound on his conviction that the fates of Khatumo and Somaliland were inextricably intertwined. Thus, he re-affirmed his commitment to pursue a productive engagement with Somaliland’s current leadership and those to come after. Moreover, he reminded me that our journey through Somaliland and delivering Daboob presentations to thousands of citizens was an experience like no other for both of us. He underscored with me that all occasions were populated by a veritable assemblage of Somaliland’s educated youth who were full of curiosity, intelligence, and civic vitality.

11. Some Implications of Dr. Galaydh’s Death.

Unquestionably, many among the Somali people everywhere are cognizant of this heavy loss. For Somaliland, this is even more devastating. I will offer a short list of the possible implications of Dr. Galaydh’s departure from the stage for making history:

A. For those in Khatumo who happen to be Dr. Galaydh’s comrades, it will be incumbent on them to identify a distinguished and large-minded individual (and team) who will lead the work to implement the fundamental points of the agreement with Somaliland. Such a quick move will inject new energy into the pursuit of ideal citizenship, civic legitimacy, and mutual consolation desperately needed on both sides.

B.  As far as Somaliland’s current and future leadership are concerned, the hour is already a tad late. Thus, it is imperative that the zeitgeist surrounding the negotiations is reactivated and the fulfilment of the terms of the agreement is undertaken with optimum dispatch. This attitude is necessary at once to address the rightful demands of Sool community and to honor a citizen of enormous distinction. As the naked truth has become so very obvious in these past three decades, Somaliland’s enviable achievements will always be definitively discounted by the absence of the vast majority of the people of the Sool region.

C. The denizens of Somaliland, whether inside the country or living in other parts of the world, should campaign with the highest intensity for the realization of the terms of the accord. Such a community-wide effort will blunt the denuding mentalities and centrifugal forces of sectarian and instrumentalist discord that are at work. Furthermore, as the imminent historian, Arnold Toynbee, taught us a long time ago, “apathy can only be overcome by enthusiasm, and enthusiasm can only be ignited by two things: an ideal which takes the imagination by storm, and an intelligible plan for the carrying that ideal into practice.”

D. Dr. Galaydh’s death should NOT be another passing loss whereby most Somalis indulge in predictable and fleeting pseudo-piety and inert subjectivity — emblems of vapid posture that I find somewhat repugnant. This is a trivial reflex that doesn’t require much serious rethinking, let alone intelligently calculated civic endeavor. On the contrary, if he were alive today, he would have warned us against such supine utterances. For Dr. Galaydh, at his best, knew about the great damage done by inertial forces inherited from habits and institutions or the frequent acts of casting aspersions on each other. These two, I suggest he would have agreed with me, invariably undergird the spectacle of degeneration that is so universally associated with the Somalis of the contemporary epoch. The antithesis, of course, is the perpetual striving for uniting truth, freedom, beauty, and cultivation of robust mutuality. Allow me, then, to conclude with precious insight from a philosopher of exceptional richness, range, and relevance to the perplexing horrors of these Somali times and our bizarre obsession with the inessential. G.W.F. Hegel asserts:

“ …Individuals are great and eminent in so far as they show themselves, through their effective personality, [to be] in cooperation with common end which underlies the ideal notion of the conditions which confront them; they are little when they fail to rise to the demands made on their energy; they are depraved when, instead of facing as combatants of the practical needs of their times, they are content merely to give free rein to an individual force [ or circumstance] which is, with its implied caprice, foreign to all common ends.”

May God bless Dr. Galaydh for eternity and may he Rest in Peace. A Luta Continua!