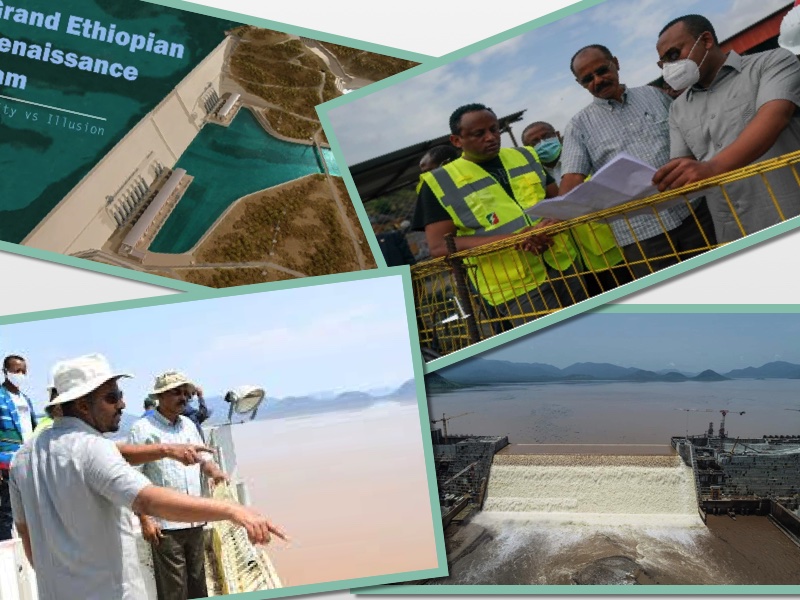 The visit of the Eritrean president to the site of the Grand Ethiopian Renaissance Dam shows a change of position in Eritrea, which had always backed Egypt in the Nile dam issue.

The visit of Eritrean President Isaias Afwerki to the site of the Grand Ethiopian Renaissance Dam (GERD) during his official visit to Ethiopia on Oct. 13 raised several questions about the impact of such rapprochement on the Egyptian diplomatic moves to galvanize the support of the neighboring countries for Egypt in the Nile dam dispute. The dispute between Egypt and Ethiopia revolves around the Nile water management and dealing with the potential risks and adverse effects of the GERD on Egyptian water security.

Since Ethiopia first announced the construction of the GERD under Ethiopian Prime Minister Meles Zenawi in April 2011, Afwerki had expressed negative stances on the dam.

During a televised interview in January 2016, Afwerki had said, “Ethiopia does not seek to generate power and [ensure] development for its people. The dam serves other political goals, which is to use the Nile waters to strongarm Egyptians and Sudanese as did Turkey with Syria and Iraq.”

Eritrea’s position opposing the dam served as a path of coordination and rapprochement with Egypt, which raised the ire of Ethiopia. In fact, Addis Ababa has accused Cairo, on several occasions, of using Eritrea to pressure and destabilize Ethiopia. This is particularly true given the conflict between Eritrea and Ethiopia since the independence war in the 1990s, and the state of no war, no peace between the two countries.

However, there have been signs of rapprochement between Ethiopia and Eritrea since Ethiopian Prime Minister Abiy Ahmed Ali came into office in 2018 and the signing of the peace agreement with Asmara in July 2018. Abiy Ahmed won the Nobel Peace Prize in 2019 as a result of “his efforts to achieve peace and international cooperation, and in particular for his decisive initiative to resolve the border conflict with neighbouring Eritrea.”

The failure to implement the terms of the peace agreement, however, pushed Eritrea to maintain its opposition against the GERD — that is, until Afwerki’s recent visit to the dam. This showed a change in positions in support of Ethiopia, unlike what has been agreed on in the framework of coordination with Egypt.

The shift in the Eritrean president’s position comes amid an escalation of tensions inside Ethiopia, where Abiy Ahmed’s government is facing trouble from the Tigray opposition. While Ethiopia had planned to hold national elections in August, the government postponed these because of the coronavirus pandemic. Leaders from the Tigray People’s Liberation Front (TPLF) in the northern region, which lies on the border with Eritrea, rejected the extension and went ahead with regional elections in September. Given Eritrea’s own dispute with the TPLF, having good relations with Addis Ababa will serve Afwerki’s own interests.

“Afwerki’s visit to the dam site carries messages from Ethiopia to Egypt that African countries [now] support the Ethiopian position, especially since Eritrea has always supported the Egyptian positions against the GERD,” Tarek Fahmy, a professor of international relations at Cairo University, told Al-Monitor.

“Ethiopia might seek to push for visits to the dam by other African leaders to drum up support for its position with the African Union (AU), currently sponsoring the negotiations [on the GERD]. But the change in Eritrea’s position does not necessarily have a negative impact on the Egyptian-Eritrean relations,” he added.

An official at the Egyptian Foreign Ministry told Al-Monitor on condition of anonymity that “supporting and strengthening relations with Eritrea is a priority on Egypt’s diplomatic agenda in Africa, within the framework of supporting Egyptian interests on the African continent.”

“There are many cooperation programs [between Egypt and Eritrea] at the political, economic and military levels, which are periodically strengthened through official visits and meetings between leaders of the two countries,” he added.

On July 6, Afwerki visited Egypt for the fifth time since President Abdel Fattah al-Sisi took office in 2014, and held bilateral talks with his Egyptian counterpart, focusing on the dispute over the GERD.

Anwar Ibrahim, an Ethiopian journalist, told Al-Monitor, “Afwerki’s visit to the dam site is linked primarily to conditions at home in both Ethiopia and Eritrea, namely the confrontation with the Tigray People’s Liberation Front, which threatens peace between the two countries. This is not to mention the complicated political scene in light of the [upcoming] elections that could be the worst in Ethiopia in the past 20 years.”

He noted, “Despite Afwerki’s previous negative stances on the dam with previous Ethiopian governments, there have been attempts to make Eritrea benefit from the GERD. This could mean that Ethiopia would further hold on to its positions during the negotiations regarding the filling and operation of the dam.”

Suleiman Hassan, an Eritrean political analyst, told Al-Monitor, “The Eritrean president’s visit aimed at showing support to Abiy Ahmed and [carried] a message to Ethiopia, especially with the escalation of tension as a result of the unilateral elections [held in September] in the Tigray Region, disregarding the federal government decision” to postpone the elections due to the coronavirus pandemic.

He added, “The Eritrean president still enjoys good relations and contacts with Egypt, Sudan and Ethiopia, and has the capabilities to continue mediating between the three countries in order to reach solutions to the outstanding issues in the GERD negotiations.”

Meanwhile, Hani Raslan, an expert in African affairs at Al-Ahram Center for Political and Strategic Studies, downplayed the Eritrean role in the conflict over the Nile dam between Cairo and Addis Ababa.

“Eritrea has never been a trump card for Egypt against Ethiopia and never a real support. Eritrea would play an important role in one scenario only, which is if Egypt decides on military action with regard to the dam. This is, however, far-fetched especially since Egyptian President Abdel Fattah al-Sisi stressed the need to resolve the dam crisis through negotiations, ruling out any military solution,” Raslan said.

“Afwerki’s visit to Ethiopia reflects common interests at home with the Abiy Ahmed administration, including a siege on the Tigray Region, which has become a threat to the interests of the two presidents in Ethiopia and Eritrea alike,” he said.

Raslan added, “A change in the Eritrean president’s stance, from rejecting to supporting GERD, cannot be considered as final, given the area’s dynamics closely related to historical components and ethnic problems.”

He described the current Egyptian position in light of the stalled negotiations and the AU’s procrastination as “not up to the real crisis facing Egypt given the ongoing Ethiopian intransigence in taking unilateral decisions to complete the construction of the dam and fill it without coordination with Egypt and Sudan.”

“Ethiopia’s was able to start filling the lake unilaterally in the first stage despite the Egyptian and Sudanese opposition. This shows that Ethiopia is unlikely to backtrack from this policy in the second stage [of the dam’s filling],” Raslan noted.

After weeks of intense negotiation rounds sponsored by the AU, talks between Egypt, Sudan and Ethiopia ended Aug. 28 without any agreement on the legal and technical provisions related to issues of drought and prolonged drought, the extent to which the agreement is binding to Ethiopia, and finding a consensus mechanism to settle disputes. Each country presented a draft agreement of its vision to the AU headed by South Africa, in a bid to find a compromise between the three countries. The AU has yet to decide on the matter.

As Ethiopia continues to make statements and send messages that it will carry on with operating the dam with disregard to the negotiation results with Egypt and Sudan, Cairo continues to cling to the negotiation track as a way to reach a binding legal agreement without taking unilateral decisions that could negatively affect stability in the region. This was expressed by Egyptian Prime Minister Mostafa Madbouly in his Oct. 18 speech during Cairo Water Week, without announcing a return to the negotiating table.