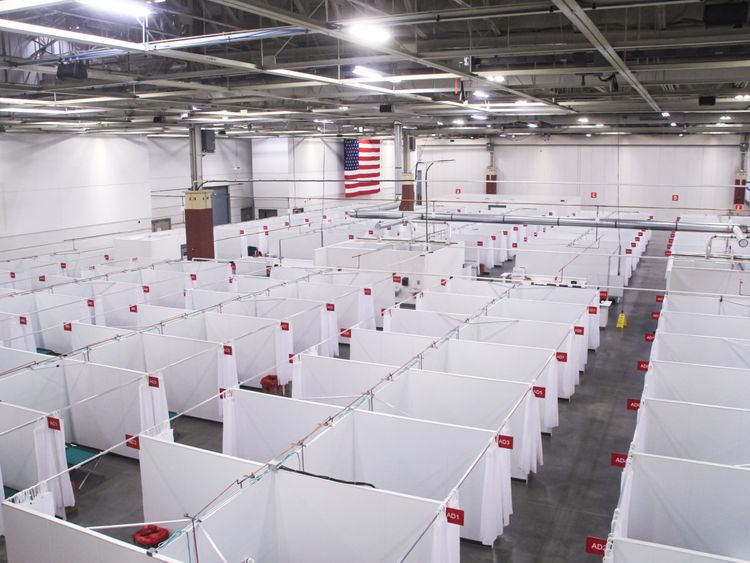 More than 85,000 new cases of the virus were reported across the country on Friday, shattering an earlier single-day record and stirring new fears about the months ahead.

The United States is in the midst of one of the most severe surges of the coronavirus to date, with more new cases reported across the country on Friday than on any other single day since the pandemic began.

Since the start of October, the rise in cases has been steady and inexorable, with no plateau in sight. By the end of the day, more than 85,000 cases had been reported across the country, breaking the single-day record set on July 16 by about 10,000 cases.

New reported cases by day in the United States 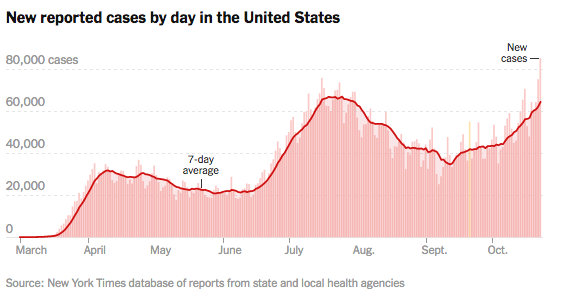 See maps and charts showing Covid-19 cases around the country »

By that measure, Friday was the worst day of the pandemic, and health experts warned of a further surge as cold weather sets in. The number of people hospitalized with Covid-19 has already risen 40 percent in the past month. Deaths have remained relatively flat but are often a lagging indicator.

The latest outbreaks, tracked by The New York Times using reports from state and local health departments, are scattered across the country, in states like Illinois and Rhode Island, which are experiencing a second upswing, and in places like Montana and South Dakota, which are still enduring a first flood of cases.

Fifteen states have added more new confirmed coronavirus cases in the past week than in any other seven-day stretch. As of Friday, six states had set or tied weekly records for new deaths. Wisconsin had its deadliest day of the pandemic on Wednesday, with 47 total deaths announced.

The geography of the pandemic has constantly changed since the coronavirus reached the United States last winter. Outbreaks struck the Northeast in the spring, the Sun Belt in the summer and now the states of the Midwest and the West, which hold the 10 counties in the country with the most recent cases per capita.

“It’s been rise after rise after rise, week after week,” said Dr. Tom Inglesby, director of the Center for Health Security at the Johns Hopkins Bloomberg School of Public Health. “Nothing has been added to the mix that’s going to make things slow down.”

For many, the soaring numbers brought back ragged memories of what it was like in mid-July, when the virus was raging through the Sun Belt.

Raymond Embry saw the worst of it up close. His small Arizona medical clinic had been giving about five coronavirus tests a day. That grew to dozens a day, and then came the surge on July 16, with 4,192 people lined up for tests to find out if they had the coronavirus.

That day, arguably the worst of the pandemic in the United States to that point, set records nationwide. By the end of that 24-hour period, a staggering 75,687 new cases had been reported around the country, and Arizona led the nation in deaths per capita.

“It was just overwhelming trying to find gloves and masks, when especially back then people are telling you P.P.E. is widely available and that’s just a lie,” Mr. Embry said, referring to shortages of the personal protective equipment that health workers need to safely do testing.

On the Texas-Mexico border, mid-July was a nightmare. Johnny Salinas Jr., the owner of Salinas Funeral Home, was handling six to seven funerals a day, a number he would usually see over a week before the pandemic. Some of those included family members and relatives of employees.

Local health officials had said they had managed to control the spread of the virus through the spring, until Texas lifted social distancing restrictions right before Memorial Day. Then the numbers skyrocketed. In July, Hidalgo County, where Mr. Salinas lives, had one of the highest per capita death rates in the state. It caught Mr. Salinas off guard.

These days, he is stockpiling masks, gloves and hand sanitizer, sealing off every other pew in the chapels to maintain social distancing and installing a plexiglass barrier to shield mourners from the deceased.

“Right now we are back to normal numbers,” Mr. Salinas said. “But I am nervous. People are relaxing a little bit too much. I believe a second wave will come and it will be scarier than the first one.”

The virus had already become deeply politicized by the summer, and, in this respect, the headlines that were made on July 16 were not surprising.

That day, President Trump hosted an event on the South Lawn of the White House with pickup trucks as props, highlighting his efforts to roll back government regulations.

As Georgia was experiencing what was then its worst week of the pandemic, Gov. Brian Kemp, a Republican, sued the mayor of Atlanta, a Democrat, over the city’s mask mandate. Republican Party officials told delegates in a letter sent out that day that they were scaling back plans for the convention in Florida, which at the time was reporting more than 10,000 new cases a day. (The convention would eventually pull out of Florida altogether.)

In July 16 news conferences, some Republican governors were insistently optimistic in places that were enduring their worst stretch of the pandemic, while some Democratic governors spoke with profound concern about the state of the outbreak, not knowing that the numbers in their states would get far worse.

“What we are seeing across the country is alarming,” said Gov. Andy Beshear of Kentucky, a Democrat, at a news conference on July 16, a day when the state reported 469 new cases. On Tuesday, Kentucky reported 1,288 new confirmed infections, nearly three times as many as the day of the governor’s speech.

But in some other parts of the country that day, the virus felt far away.

On July 16, towns in North Dakota were holding their annual summer festivals. People cheered the rodeos and danced together, maskless, in the streets.

Erin Ourada, the administrator for Custer Health, a public health department just west of Bismarck, watched it all with foreboding.

“I don’t think the reality had hit the majority of North Dakota,” Ms. Ourada said. It was hard to even think back to that summer period, she said this week, when “everyone was still just kind of living their lives and getting ready for the next street dance they were going to hit up.”

As the nation reached a record on Friday, experts expressed worry about what the coming weeks might bring.

Testing has become more available in recent months, and administering more tests can often uncover cases that might otherwise go unnoticed. But experts said that the uptick in cases now could not simply be explained as a result of more testing. Even as cases of the virus are rising, deaths have remained relatively flat at about 775 a day.

Yet in North Dakota this week, hospitals are striving to find available beds. The state now has the worst rate of infection in the country, relative to its population, and it is ending formal contact tracing except in health care settings, schools and colleges. Members of the National Guard are calling people to tell them they have tested positive.

This is what she saw coming when the case numbers began steadily growing at the end of July, said Ms. Ourada, “and we’ve been living in that ever since.”

How Brent Is Tackling Health Inequalities During Covid