Home Somaliland Republic of Somaliland Suspends All Cooperation with the UN 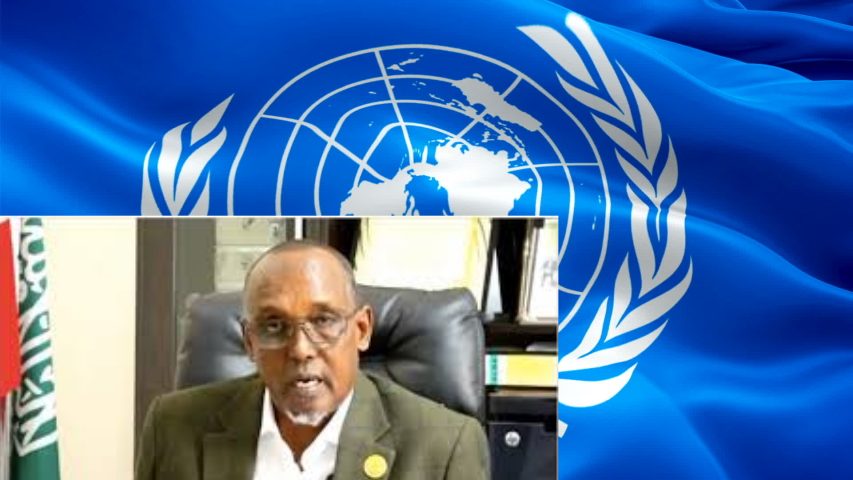 The government of the Republic of Somaliland suspended cooperation with UN agencies completely until further notice.

The RoS Ministry of Planning and National Development, in a statement it sent out to all partners on Sunday, made it known to the UN and other international partners that all UN programs and all discussions and consultations relating to them were to cease immediately.

“The Ministry of Planning and National Development, fulfilling its mandate to coordinate the development and humanitarian activities implement(ed) by development partners is hereby sharing with all UN agencies that all discussions and consultations regarding the UN country programs and work plans are suspended until further notice,” the statement said.

It went further to hammer in the nail.

“All sorts of events of the above-mentioned issues are not allowed effective from today 25th October 2020,” it added. 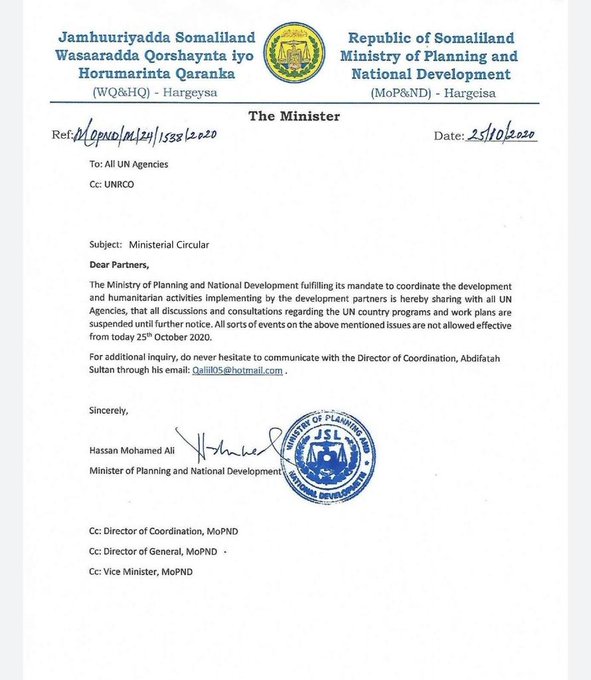 The government, however, did not say why the actions against the United Nations was taken.

It is understood, nevertheless, that neither the government nor the people of Somaliland had been happy with the unhealthy ‘partnership’ the UN had built with the weak Somalia government. Its undivided attention and quick response to every whim and wish of Villa Somalia reached a stage where none could distinguish between the Somalia government and the UN office.

Furthermore, the UN political office in Somalia, UNSOM, never made an effort to remain impartial to political issues between Somalia and the 30-year-old republic next door – Somaliland which justifiably so ired Somalilanders in the belief that the UN was intentionally glorifying the inglorious.

It, in fact, became more active in attempts to subjugate Somaliland to Somalia dictation. It insisted on funnelling development programs through Somalia. UNSOM openly supported political activities such as the so-called elections which denied Somaliland existence, and the UN channelled 90% of its activities to Somalia thus creating economic imperialism meant to trap Somalilanders in a web of need and deprivation to drive them to Mogadishu as critics oft pointed out.

UNSOM did not only financially support ‘selection’ of Somaliland-born, mercenary MPs in the federal parliament but even provided venues for the process in 2016 fully well knowing that these people represented nobody other than themselves.

Reaction to the government was swift showing unreserved support with Somalilanders.

No double standards. We turned back Oomaar, Kalluun and many more in the past. Not that Somalilanders had a grudge against them personally but because they forfeited any right to #Somaliland when they chose their side as #Somalia. Let us not repeat the Rayaale-Tuur mistake again.

I don't think this has been verified. Let's wait for a while. If true, and it is a massive big if, then Somaliland would've crossed the rubicon of courage it should've breached 30 years ago. UN is an enemy entity, and always has been. We should've kicked them out years ago

#UN has been destabilizing the sovereignty and the progress of Somaliland for so long.
I admire #Somaliland Government by suspending all the discussions & consultations with UN, system of governance should be exercised effectively so that no one violate the rules and regulations! pic.twitter.com/CrXvbYqM5V

During 80s the UN helped prolong Barre's genocidal regime & for last 30 years kept destabilizing Somaliland.Finally the SL govt has taken up the challenge by rejecting to have anything to do with UN Somalia development plan for 2021-25.Perfectly justified to suspend cooperation.