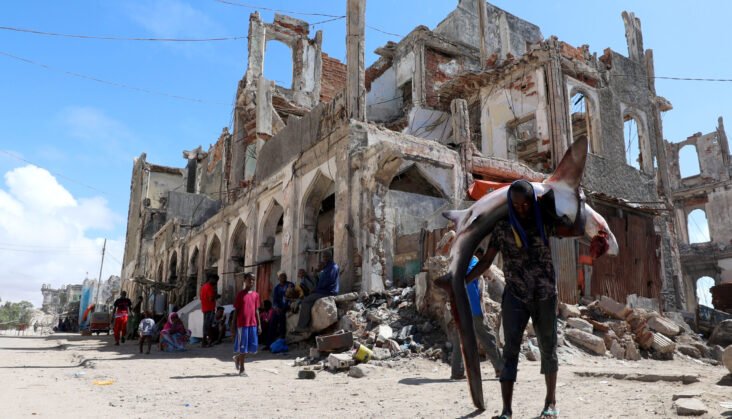 Somalia is an onlooker of a significant portion of maritime trade that makes its way to and from Europe. It is a gatekeeper for the Red Sea, a region increasingly on the radar of global players eyeing financial and military gains. In this sixth part, we look at the potential Somalia has as a key player in the region, once it strengthens its internal situation.

Somalia is host to one of the longest coastline in Africa, acting as a gateway between the Indian Ocean and the Red Sea leading to the Mediterranean.

Despite its invaluable geography, Somalia and its surrounding region have been marred by conflict, terrorism, wars, poverty, and famine for decades. These factors have had adverse impact on the country’s political, economic, and social stability rendering it internally weak and subject to external influence.

The impact of regional dynamics and the need for Somalia to position itself strategically becomes clearer day by day as national elections draw nearer and external attempts to lay the cornerstones for the country’s direction intensify.

If Somalia is to set its own course, the country is in urgent need to stabilise itself and take a stance regionally. As long as internal cohesion is lacking, Somalia risks becoming driftwood in a sea hosting actors ranging from pirates to the tankers and warships of the biggest economies in the world.

The internally weak but strategically positioned country is heading towards national elections, the outcomes of which will set the course for the nation in the first half of the decade.

These elections will give a voice to the people – and to regional players across the sea.

When speaking of Somalia, one should bear in mind that the nation is not as unified as may assume. In 1991, the north-western state of Somaliland declared independence and has acted on its own ever since. The state refers to itself as the Republic of Somaliland even if without international recognition.

East from Somaliland lies Puntland, which formed itself as a self-administering entity in the late 1990s following its neighbour’s lead. Unlike Somaliland, Puntland committed to the reconstitution of Somalia along the federal framework.

…external players will continue to use Somalia’s fragmentation for their own gains also in the next political cycle.

The federal and the state levels have since formed the two layers of political decision-making in Somalia. Even though all states adhere to national unity and abide to the central government in principle, states claim jurisdiction over their territories. Regardless of unity, everyone wants the final word on their own turf.

This internal disunity is one of the key weaknesses of the country. It is the cause and symptom of Somalia’s inability to deter external influence and to enable nationwide development. Even though ally frameworks have enabled growth through trade, asymmetries have been made visible in the wake of the Gulf Crisis that pitted the Saudi-led coalition against Qatar. The ongoing crisis has forced Somalia to take sides, and as of now, Somalia remains on the Qatar-axis and has also given Turkey the green light to expand its presence in the country.

It is difficult to generalise the direction political positioning will take, knowing that the variables pushing-and-pulling Somalia to lean towards certain allies vary across the country. What can be said, is external players will continue to use Somalia’s fragmentation for their own gains also in the next political cycle.

As Somalia has taken shape and redefined itself, so has the Horn of Africa. A historic milestone was reached in 2018 with the signing of the peace agreement between Eritrea and Ethiopia, and an integration agenda for the Horn of Africa was subsequently kicked off by Ethiopia’s Prime Minister Abiy Ahmed a year later.

The visionary prime minister was well received on the federal levels of Somali decision-makers, yet with scepticism amongst the majority of the public; the memories of bitter wars and border-disputes are still fresh.

The intensive diplomatic shuttling between Ethiopia, Eritrea, and Somalia reached a milestone at the start of 2020, when the leaders of the three Horn countries agreed on a joint plan of action. The plan formalised the contours of the tripartite integration and touched on three key topics: security, infrastructure, and the formation of a common and aligned voice in international arenas.

Since the very onset of negotiations, Somali sentiment regarding the proposed integration has been cautious seeing the alliance as an opportunity and a risk.

The opportunities lie in harnessing Somalia’s favourable position as the cross-border trade nexus managing imports and exports to the Horn and beyond. Access to Somalia’s ports is of great interest to landlocked Ethiopia specifically and Somalia hopes to turn this interest into investments and economic stability on its own territory.

The goals of regional integration go beyond fostering economic ties to immediate neighbours. The vision is to establish Somalia as a global transport hub rivalling other players across the Indian Ocean and the Red Sea.

Risks are more nuanced. Some argue that the tripartite integration might be a cover-up for Ethiopia’s long-standing dream of unabated access to Somalia’s waters for commercial and military use. As Ethiopia has laid the foundations for the integration plan, it has reconstituted its navy in parallel.

From a domestic perspective, there is a strong case to first focus on getting the house in order first and then invite the guests. The fear being if it’s not done in this order, the guests risk becoming the masters.

Furthermore, Somalia finds its negotiating power weak simply due to demographics. With a population of more than 100 million, mass migration from Ethiopia is feared to tilt balances in Somalia that has only 15 million people spread across its vast country.

The worries echoed from Somalia speak of the general asymmetries between the two countries. Many feel it is too early for Somalia to start building partnerships across borders when internal structures are still so weak. From a domestic perspective, there is a strong case to first focus on getting the house in order first and then invite the guests. The fear being if it’s not done in this order, the guests risk becoming the masters.

In addition to distrust between neighbours, significant regional incongruences also needs to be recognised. The proposed tripartite integration does not conform to what is called the Greater Horn covering all the eight countries of IGAD, meaning Djibouti, Ethiopia, Eritrea, Kenya, Somalia, Sudan, South Sudan, and Uganda. Another relevant grouping called The Proper Horn refers to Ethiopia, Somalia, Eritrea, and Djibouti.

The tripartite is not in line with either.

From Somalia’s vantage point, an alliance covering the Horn but excluding Djibouti is practically illogical. Consisting of ethnic Somalis and regarded as Somalia’s sister-nation, Djibouti and Somalia are too tightly knit to act alone.

In light of the facts on the ground and the current dynamics, the question of the tripartite’s longevity is pushed to the forefront. The alliance has been established by respective heads of state, but without a bottom-up, grassroots pull. Whether the tripartite succeeds in answering the needs of the people of Somalia and ensuring stability, will define the fate of the alliance.

The government of Somalia is not able to have a monopoly over its territory. The effects of this have been seen in the leverage of non-state actors, such as Al-Shabab  – active in the southern and central regions –  as well as IS in Puntland, which have managed to secure and maintain itself in the country.

These actors have built a bridge of destabilisation over the Red Sea and Gulf of Aden to the IS and Al-Qaeda cells active in southern Yemen. A recent UN panel of experts found a network of arms and ammunition smugglers operating on both sides of the seas with the scale of trade reaching up to four shipments per month. The sheer magnitude of this means the trade is also feeding terrorist’s strongholds in other regions of Somalia beyond the immediate northern coast.

With the prevention of non-state actors and illicit trade in mind, Somalia is also party to the new Council of Arab and African Littoral States of the Red Sea and Gulf of Aden launched in Riyadh in January.

READ MORE Ports, military bases and treaties: Who’s who in the Red Sea

The membership of Somalia to the council will most likely remain nominal, yet it risks deepening rivalries between its trading partners. The council brings Somalia to the same table with Saudi Arabia and the United Arab Emirates, yet it is well known that Qatar backs Somalia’s government and domestic policy.

On the other hand, the UAE supports peripheral states and has good relations with Somaliland and Puntland through, for example, a military base in Berbera and the management of the port in Bosaaso.

As the examples imply, Somalia is being pulled in various directions by external actors. As long as there is no unity, Somalia will need foreign muscles to keep it in the regional and global spheres of influence.

Setting the course for a unified Somalia

As Somalia heads to the polls and negotiations with power-holders heat up, external actors must keep in mind that turning Somalia into a playground for foreign influence is in no one’s interest.

If sustained benefits are a goal, the development of a strong and coherent Somalia is the trajectory that should be supported by neighbours and allies alike.

Regardless of how weak unity and national cohesion are in the hands of the political elite of Somalia, there is an urgent need for a sound national agenda based on a shared vision of a political system that has the chance to succeed and flourish.

This calls the federal government and respective federal states to take the lead in implementing a national agenda that sets the direction towards unity; both within and across the two levels of decision-making. In practice, this could mean facilitating a constructive dialogue with Somaliland to mend toxic fissures.

This is the only way Somalia can become a regional player – and eventually take its role as the true gatekeeper of global trade to and from the Red Sea.

*Ambassador Ahmed Abdisalam Adan is the Executive Director of the Horn Center for Effective Governance & Policy Development, a non-profit Think-Tank based in Mogadishu.

This article is part of the dossier: Red Sea Dynamics. This is part 6 of the series.

For part 1: Egypt, Saudi Arabia, Sudan…Conflict or cooperation in the Red Sea?

For part 2: Ports, military bases and treaties: Who’s who in the Red Sea

For part 3: The Red Sea: ‘A vital artery for the world economy’

For part 4: The Horn of Africa and the Gulf: Shifting power plays in the Red Sea

For part 5: Yemen: What happens here sends waves all across the Red Sea