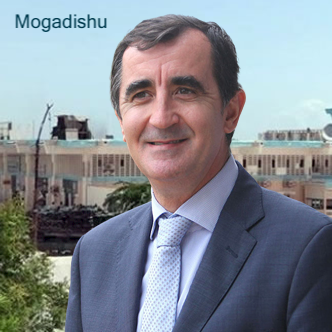 The EU Ambassador to Somalia (and Somaliland), Nicolas Berlanga, came under a barrage of criticism for indirectly condemning state executions carried out against six men on Thursday for taking others’ lives.

“The EU is deeply saddened by the recent execution of 6 detainees in Somaliland. The EU holds a principled position against death penalty and is opposed to the use of capital punishment under any circumstances,” Mr Berlangs said in a Tweet which introduced a more elaborate statement on the executions.

“The European Union is deeply saddened by the news of the execution of 6 convicted detainees in Mandera prison, Somaliland, on 26 November 2020,” stated a statement which the EU Mission penned Saturday in conjunction ‘with the EU Heads of Mission and the Heads of Mission of Norway and the United Kingdom’.

“The European Union holds a principled position against the death penalty and is opposed to the use of capital punishment under any circumstances,” the statement said.

It went on to assert that killing a person found to have taken the life of another did not present a deterrent to more blatant murders happening.

“No compelling evidence exists to show that the death penalty serves as a deterrent to crime, in more effective than imprisonment,” it continued to say – a sentence which appears to have mistakenly used a ‘comma’ and the preposition ‘in’ needlessly instead of adding ‘ly’ to the word ‘effective’ for clarity’s sake.

This last sentence – more than anything else – rubbed salt on Somalilanders’ deep belief in their faith and Allah.

Allah (SWT) says in this verse that in the execution of the killer, there is life for you. The killer is also saved from being punished for the crime in the hereafter.

“There is life for you in retaliation (execution), O people of understanding, so that you may refrain.” [2:179]

But, before this happens, the courts and its judges ascertain beyond a reasonable doubt that, in fact, the convicted, is the one who committed the crime.

While justice is taking its course, Allah permits the immediate family of the deceased to forgive the killer. If that becomes the case, the state does not sentence the murderer on the crime committed but may punish him for other offenses relating to the commitment of the crime – or let the person go without resorting to that right.

Allah expresses how preferable it is that the bereaved absolve the killer of their family member from the crime and how they will be rewarded for the act of kindness and the spirit of forgiveness.

“O you who believe! Retaliation for the murdered is ordained upon you: the free for the free, the slave for the slave, the female for the female. But if he is forgiven by his kin, then grant any reasonable demand, and pay with goodwill. This is a concession from your Lord, and a mercy. But whoever commits aggression after that, a painful torment awaits him.” [2:178] 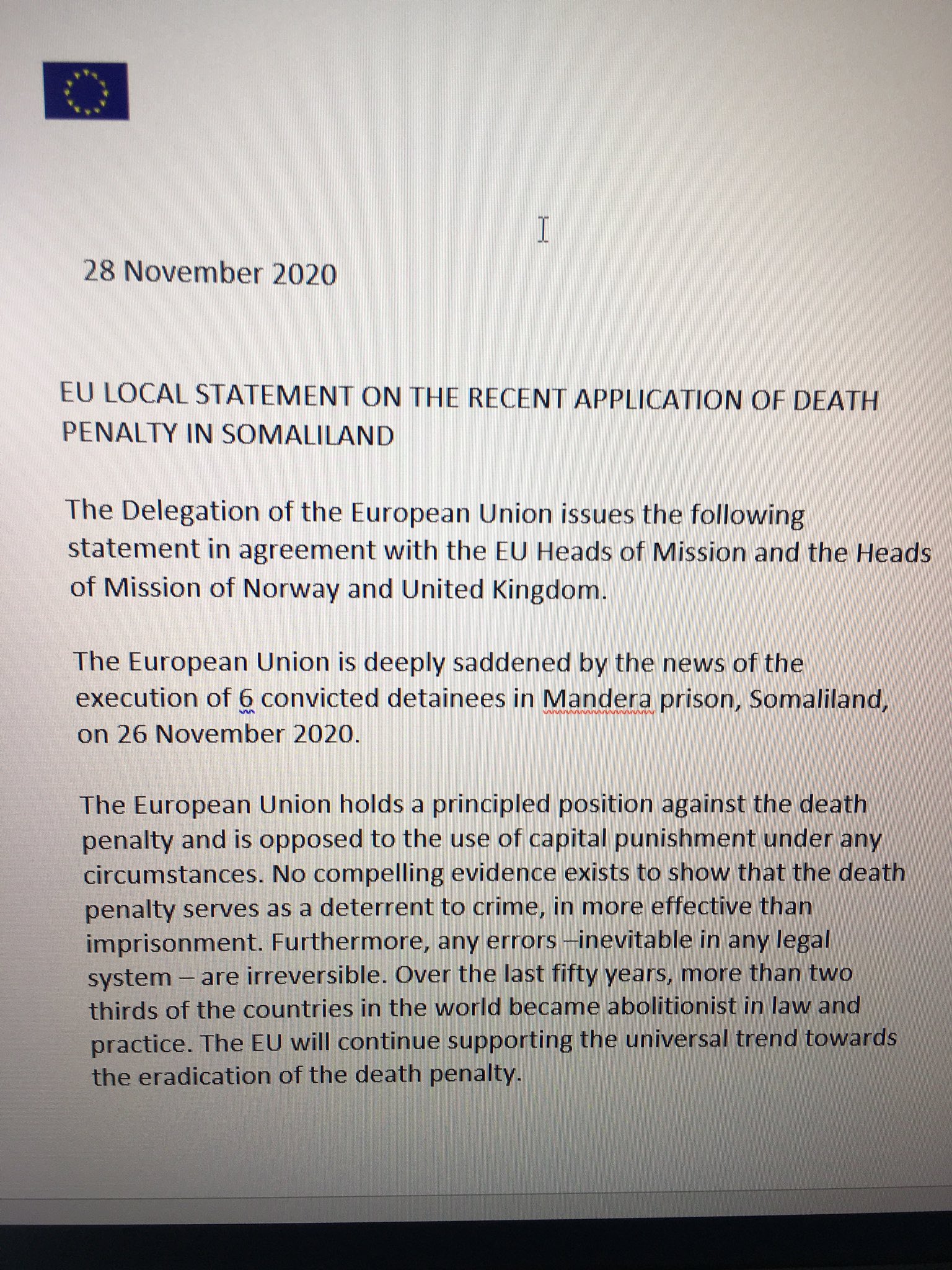 For Muslims, there is no law above that of Allah – God.

Furthermore, Somalilanders suspected that Mr Berlanga and the EU were quick to point an accusing finger on Somaliland at every turn – a spotlight they shy away from the Somalia which hosts them in a guarded compound. Somalia has been executing ‘suspected’ Shabaab members and people who killed other people in droves and not a word came from either of the parties signing the statement above, Somalilanders said.

Here is a sample of tweets.

Capital punishment in Somaliland is rare and the practice is underpinned by Islamic law — which sets out the strict legal terms that must be fulfilled first.

Why not condemn the US too — a country that carries out more death penalties per year than Somaliland?

The purpose of death penalty in Somaliland is not to deter crime but to keep the peace among clans. If a murderer is not executed by the State, the clans of his victims launch attacks in which dozens, even hundreds may die. So death penalty here saves lives and prevents anarchy.

We look at your condemnation of the execution of convicted detaineees in prison Somalia in Mogadishu. pic.twitter.com/X2EhwGVxBn

You're forgetting justice is not just for the State but rather for the family of the victim. In the west you always prosecute crimes against the state and a lot time families are always overlooked & nobody allows the families the power to decide once the judge convicts the murder

I think Somaliland administration knows what is best for their state and no ideologies or other policies should be imposed on them.

You've no legal mandate to discuss about somaliland issues, it doesn't make any sense to us if you& your EU are deeply saddened or not

We do not consult with anyone on what our religion commands us to do.

We do not see you condemning the almost-daily executions in Mogadishu and elsewhere in #Somalia. I am sure many of the ppl killed were NISA-framed. BUyou never dare question. Executions happen in the western world, too.
Don't you ppl take stock of what you say/state in public? https://t.co/V97kKgDla2

Who questions the EU and Americans when they roast children in Afghanistan, Libya ,Somalia, Iraq,Syria using cluster bombs and drones? Double standards!
Somaliland has Islamic laws and principles ,constitution and traditions

I don’t think it’s legitimate for EU to tell a state what they can or can’t do in terms for their justice. Don’t use ur aid for political agendas

Such kind of laws should only be accepted in EU countries not in Somalia. We are not a member of EUROPEAN union.

Belarus is a European country not to have abolished executions, executing two people in 2017 and more than 200 since 1990.

The United States executed 22 people across seven states in 2019 alone.

Amnesty International recorded at least 2,307 death sentences in 56 countries compared to the total of 2,531 reported in 54 countries in 2018.

in 2020, 53 countries – most of whom Islamic – execute offenders found on killing other people.