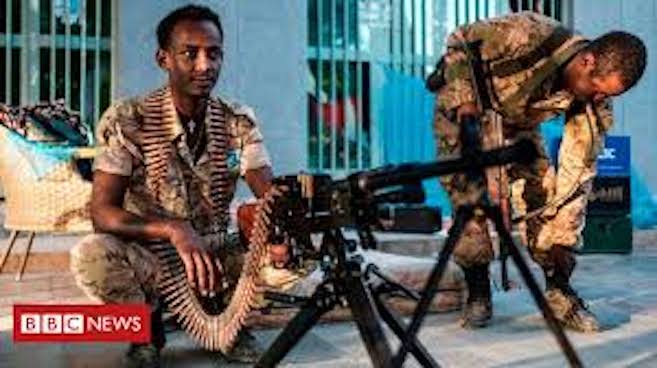 The head of local forces in Ethiopia’s northern region of Tigray says they are still fighting near the city of Mekelle, which was seized by government troops at the weekend. 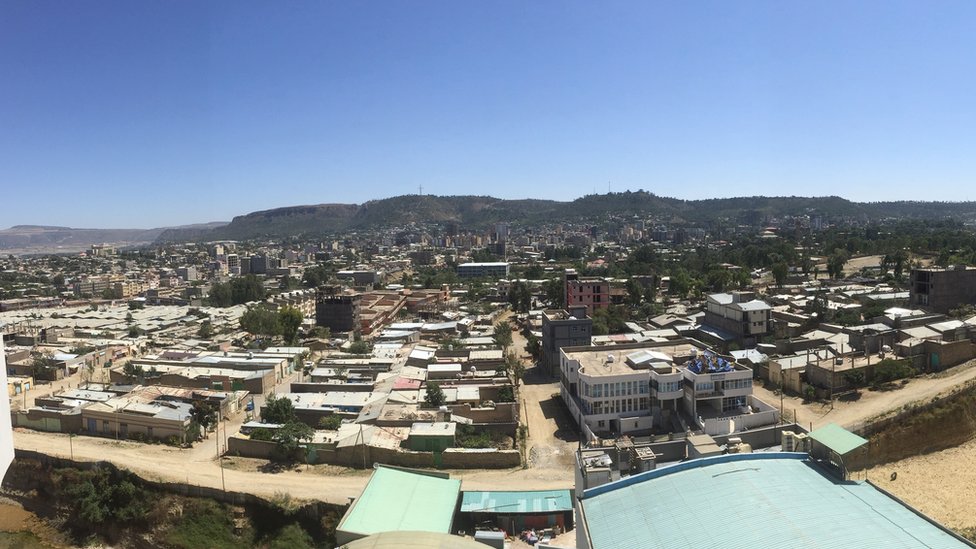 The government denies the claims and insists the TPLF has been crushed.

Hundreds of people have reportedly been killed in the month-long conflict.

Thousands have been displaced, while the UN and aid agencies have voiced concern about the humanitarian situation.

Prime Minister Abiy Ahmed told parliament on Monday that not a single civilian had been killed since the government launched its offensive in early November.

With all phone lines and the internet cut off, it is impossible to independently verify statements from either side.

What does the TPLF say?

In a text message to Reuters news agency on Sunday, Debretsion Gebremichael claimed that his forces had shot down an Ethiopian warplane and captured the pilot.

In another message on Monday, he said that the TPLF was “close to Mekelle, fighting”.

Mr Debretsion also said the TPLF had retaken the city of Aksum from the federal army.

On Monday, Fisseha Asgedom, a former Ethiopian ambassador to the UN with affiliations to the TPLF, told the BBC that reports by the Addis Ababa government of a sweeping advance were “a joke”.

“The Addis Ababa government announced that they have captured Mekelle and six hours after they announced this they bombarded Mekelle… It’s propaganda. Why can’t they send the international community some videos?”

What does the Ethiopian government say?

PM Abiy announced that Mekelle – Tigray’s regional capital – had fallen to the army on Saturday, describing the move as the “last phase” in his government’s offensive.

In a BBC interview on Monday, Minister of Democratisation Zadig Abraha, denied the TPLF’s claims that they had captured Aksum and shot down a plane.

He also said the TPLF were “not engaged in a guerrilla war” but were “running for their lives”.

“Their rank and file have disbanded. Everyone is surrendering,” he added.

Redwan Hussein, a senior federal official in Tigray, said government soldiers had been careful not to involve civilians in their advance.

Troops “just left the towns encircled and then moved on to the next. That’s how we see no casualty out of our operation until we also reached Mekelle,” he said.

How bad is the humanitarian situation?

On Sunday the International Committee of the Red Cross (ICRC) said supplies in Mekelle’s main hospital – including body bags – were running “dangerously low” as doctors treated people involved in the fighting around the city.

However it gave no figures for the numbers of injured or dead. Neither did it say whether the victims were civilians or soldiers.

Ethiopian officials have promised to allow humanitarian groups to operate in Tigray, but the UN has said it is “extremely concerned about the safety and welfare of civilians in Tigray”, and called for better access.

Ethiopia has deployed troops along Tigray’s border with Sudan, preventing people fleeing the violence from leaving the country, according to refugees.

Who are the TPLF?

The TPLF fighters, drawn mostly from a paramilitary unit and a well-drilled local militia, are thought to number about 250,000.

The organisation was founded in the 1970s and spearheaded the uprising against Marxist dictator Mengistu Haile Mariam, who was toppled in 1991.

It then went on to be the dominant political force in the country until Mr Abiy became prime minister in 2018.

Mr Debretsion has said the Tigray forces were “ready to die in defence of our right to administer our region”.

What is the fighting about?

The conflict is rooted in longstanding tension between Ethiopia’s government and the TPLF, which dominated the entire country until Mr Abiy came to power in 2018.

When Mr Abiy postponed a national election because of coronavirus in June, relations further deteriorated.

The TPLF said the government’s mandate to rule had expired, arguing that Mr Abiy had not been tested in a national election.

In September the party held its own election, which the government said was “illegal”.

In early November, TPLF fighters entered a military base in Mekelle which led to the start of the federal army’s operation in Tigray.