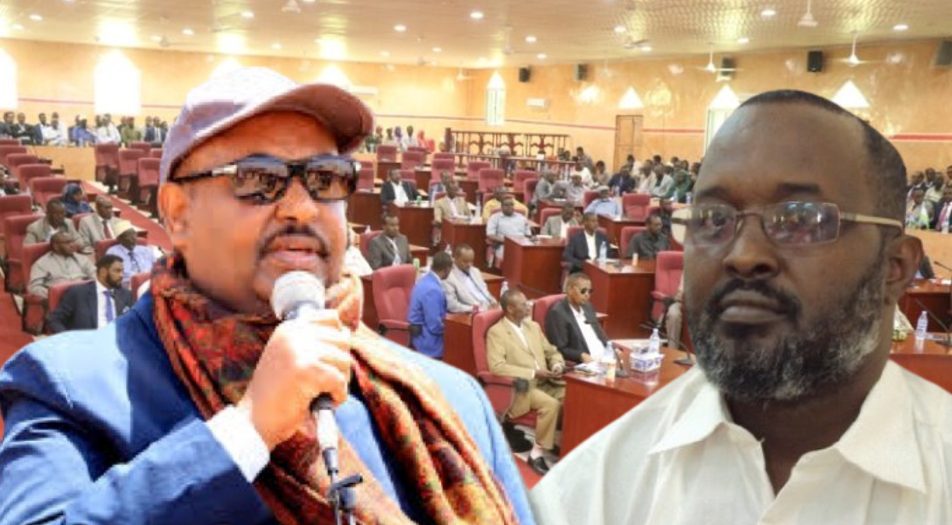 Eight (8) members of Puntland’s House of Representatives were stripped of their parliamentary immunity following a motion against them organized by the Speaker.

A lawsuit has also been filed against them by the Attorney General for causing stir in the 19th meeting of the Parliament at the 47th session alongside other allegations.

It was 2nd of November 2019 when Awil Hassan Daad – a lawmaker at Puntland’s Parliament – was about to be stripped of his legislative immunity had it not been the member parliaments who snubbed the Attorney General’s request to strip the MP of his immunity.

At the time, Mr. Awil had probed the President of Puntland – Mr. Said Abdullahi Deni – about the developments in Puntland, as part of the regular exercise of parliamentary oversight of the executive branch. Unfortunately, Mr. Deni had stepped out of the House after feeling agitated and harshly reacting.

The Attorney General specifically accused the MP of making offensive remarks though put as interrogation at the opening of the 45th session – an act that, according to the Attorney General, clearly violates the laws and the constitution of the country; these accusations were disproved by Mr. Awil citing that he was merely fulfilling his duty as parliament member.

Mr. Daad told BBC that: “There is no way the Attorney General can file a lawsuit against me without following a formal investigation and a thorough process before accusing me of any crime I may or may not have committed”.

Some relatives of the MP along with some other close friends of MPs pleaded to President Deni to order the Attorney General to withdraw the case, and forgive him, to which the President had agreed with. However, Mr. Awil stated that: “The President cannot pardon me as member parliament on constitutional issues; as we both have immunity to be respected”.

Days after this incident (07 November 2019), a motion was put on the table to remove the Speaker from his position for which the assembly in a majority of vote (49/53) voted in its favor. One month later, the ex-Speaker was stripped of his immunity for violating the constitution – though the ex-Speaker denied committing any wrongdoing to deserve the removal of his immunity; hence exacerbating the protracted constitutional crisis in Puntland.

This time, the situation was even worse. Eight (8) MPs found themselves much the same as normal citizens without immunity when 35 out 39 MPs supposedly voted to remove the legislative immunity from them – immunity that would have otherwise enabled better diversity of opinions. The 8 MPs have spoken out that they did nothing wrong except expressing their views that were different from that of the Speaker. They said they have been targeted for their opinions on holding the government accountable for its operations and other issues of concern to the people of Puntland – the very reason the legislative immunity was introduced; in order to protect the MPs from targeted and/or political prosecutions.

In recent interview with Daljir media, Mr. Mohamed Ismail Mohamed (Known as Sibad) – an MP in Puntland’s parliament who also serves as the chairman of Mustaqbal political organization – mentioned that the act of removing the immunity from those MPs was unconstitutional and thus still considers them as MPs. Mr. Sibad said the root cause of all these recurring problems in the parliament is that the Legislative, Judiciary and Executive branches come to be inseparable in violation of Article 58, Paragraph 1 that states: “Each state organ shall be independent in the exercise of its functions and powers and not subordinate to the other organs, except in the specific cases that this Constitution explicitly establishes”. It also violates the same Article, Paragraph 2 that states: “The delegation of functions and responsibilities from one state organ to another is prohibited”.

Mr. Sibad clearly explained that the case of these MPs should not have been handled by the Attorney General as there were no grave crimes and misdeeds committed in the House. He added that the immunity is instrumental in matters as vital as keeping democracy alive in the face of governments with authoritarian tendencies.

Mr. Sibad’s statements come as no surprise. On 08 December 2020, the President of Puntland has reportedly met with the acting chairman of Puntland’s Supreme Court in Garowe with regards to the issue of the eight (8) MPs. Sources confirmed that the President ordered the court to specify a date of hearing for the case of these MPs and delay the proceedings until after April 2021 when the Senators at the Upper House of Somali Parliament have been elected – but the MPs denied to have submitted any form of complaint or protest to the Supreme Court for hearing in the first place. Later that day (08 December 2020), the Attorney General sent a letter (dated 06 December 2020) to the Supreme Court requesting the case of these MPs to be handled at their level.

Everyone can clearly see the awful truth that the three branches of the government in Puntland (Legislative, Judicial, Executive) are in each other’s pocket functioning as one unit; the result is the suppression of those who dare to question the operations of the government and its external deals that makes everyone including the MPs dispensable.

The constitutional crisis has been there all along in Puntland even though it has now reached its worst levels. During Abdullahi Yusuf’s era in Puntland, thirteen (13) MPs were stripped of their legislative immunity for their political views as the late Yusuf was preparing himself for the top seat in Somalia. Four (4) Parliament Speakers lost their positions in unlawful motions during the past 15 years. Three (3) MPs lost their immunity during Abdirahman Farole’s era for expressing their views on the disputed region of Sool. There are number of times when the President and his Vice President struggled; due to either ambiguity in the Constitution or demeaning it and giving different explanations based on one’s desire.

In conclusion, Somalis are wondering if Puntland is heading towards a dictatorship much like Madobe’s Jubaland and its seriousness about the democratization process it has introduced by opening political organizations!