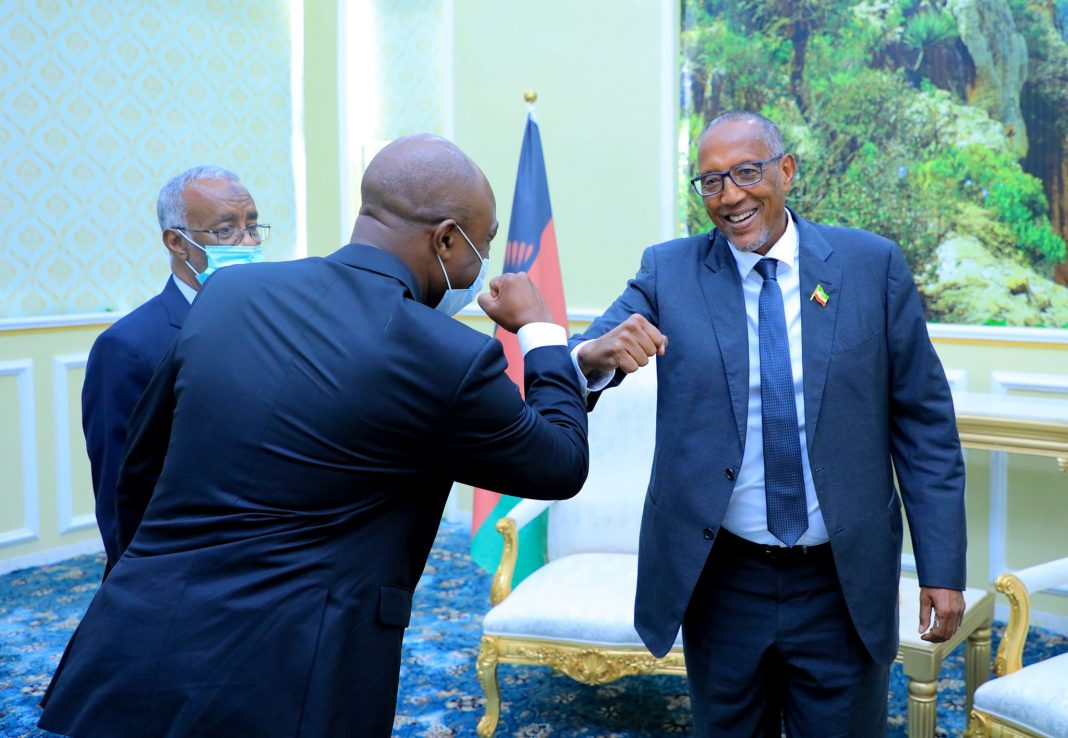 Minister Mkaka and a delegation he led reached Hargeisa earlier in the day for an official visit during which the delegation will explore a wide avenue for a wide-ranging cooperation with counterparts and key government institutions.

Among Mkaka’s delegation were Mr Martin Tom, Advisor to President Lazarus Chakwera and William Bambi, of the foreignMinistries Africa and Middle East Bureau.

The meeting between the President and Minister Mkaka, apart from according a warm welcome to the delegation, aimed to jumstart collaboration between the two East African nations.

The arrival of the Malawian high-level delegation closely follows on the heels of a historical four-day visit President Bihi made to the Republic of Kenya from the 13th to 16th of December.

President Bihi and President Uhuru Kenyatta held intensive meetings for two consecutive days to establish a solid base for heightened bilateral relations between the two nations and the two peopl’es who shared common points in history, geography and culture.

Kenya and Somaliland agreed to strengthen bilateral ties on a range of areas which spanned over education, agriculture, aviation, trade and ports – among others.

Somalia, apparently rubbed the wrong way by the increasing visibility of the Somaliland Republic and the belated realization of its geopolitical importance in the region, severed ‘diplomatic relations’ with Kenya in a statement it released at an ungodly hour on Saturday (esmall hours of Sunday morning).

The Villa Somalia action met with a cool and mature response on the Kenya side which advised a more responsible study of affairs on the Somalia-Kenya relations, announcing that it would set up a committee to follow up on new developments.

The Republic of Somaliland, which had been enjoying peace, stability and a high-degree of developed democracy on its own for the past thirty years unlike its tumultous past partner, Somalia, to the south, appears to have attracted and held the attention regional giants such as Kenya and Malawi as well as other diplomatic partners such as Taiwan.

The United Kingdom, Ethiopia, and Djibouti, too, have representative offices in the capital, Hargeisa.

The rash reactions of Mogadishu, on another level, never failed to amuse tweeters.whenever Somaliland gained an inch.

Other Tweets highlighted how why Somalilanders were so delighted with Africa waking up to its over 60 years of 30-year Italian Somalia domination, first, followed by persection and pillaging, and another 30-year world intransigence to its right to withdraw from a failed union.

It effected at least six 1Person-1Vote elections upon which results the national constitution was passed and three presidents changed places which Somalia has no hope of achieving any on same democratic platforms upto this late date. Instead, Somalia still continues on its robbing spree on common resources earned after the 1960 ill-fated merger and to attampt block every developmental or diplomatic Somaliland move since 1991.

Africa’s democratic countries must unite their efforts & come together. President of Malawi, Hon. Lazarus Chakwera won a historic election in #Malawi this year. His Foreign Affairs minister @EisenhowerMkaka is in Hargeisa, the Horn of Africa’s only democratic nation, for talks. pic.twitter.com/YJH4IDoPaU

I hope the Malawian delegation will enjoy their visit to the Republic of #Somaliland & the two nations will work together on establishing an unwavering diplomatic relations btw the two countries pic.twitter.com/gn2o66Yrd9