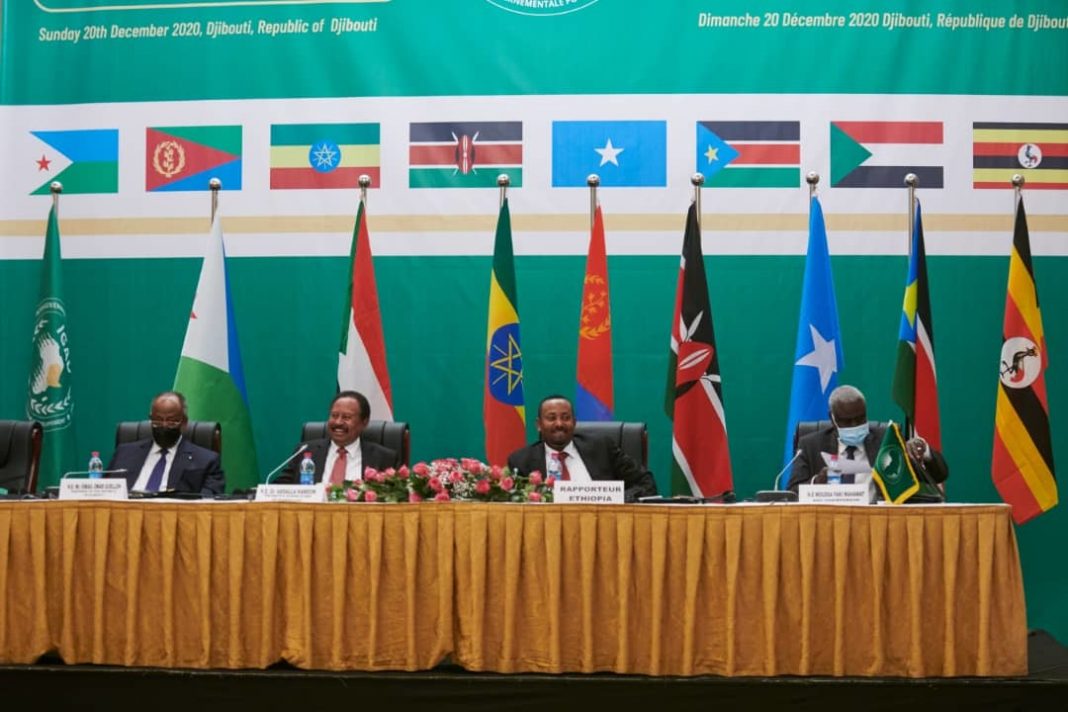 A communiqué issued at the end of the 38th extraordinary Assembly of the Intergovernmental Authority on Development (IGAD) Heads of States of 20th  December 2020 abysmally failed to make a firm, appropriate stand relevant to the region on a number of issues related to Somalia-involved issues.

First, it totally and so unforgivably ignored a tricky situation still developing between the Federal Republic and Kenya.

Somalia severed all ties with the Republic of Kenya on the 13th. Immediately preceding this action and on days that followed, it starts airlifting Turkey-trained paramilitary units to the border with Kenya. The latest of these airlifts were made today, Monday – a fact which accentuates how vIlla Somalia cannot use ground transport as Al Shabaab controls large areas between Mogadishu and the border with Kenya in Gedo of Jubaland State.

Instead, the convening Heads of States and other high officials representing others ‘appreciated the efforts and milestones registered by Somalia Security Forces with the support of AMISOM in containing and combatting Al Shabab’.

A more inaccurate statement about the reality on the ground could not have been made.

Coincident with the above, government-media and other paid outlets begin inciting the public on war propaganda accusing Kenya of preparing to invade Somalia territory.

IGAD said nothing of this incendiary situation which augurs ill for an already volatile region.

On another equally critical issue concerning the recurring violation of Somalia to a meaningful, time-bound dialogue with the Republic of Somalia, the Communiqué also shied away from calling a spade a spade.

Since 2012 when the talks between the two erstwhile partners started talking, Somalia had reneged on all areas on which an agreement had been hammered out. It did not stop there but compounded it with frequent hedging and ill-explained postponements of scheduled talks.

How Somalia again failed follow-up talks scheduled to develop the talks which ended on the 17th of June 2020 could have sufficed a fair IGAD to reprimand Mr Farmajo who was attending. On this pretext or that, he and his government utterly slighted the US, Djibouti, IGAD itself, and the rest of the region and international partners by inventing excuse after excuse to feign a non-existent inadequacy and/or inappropriateness of time.

Instead – again, the convening officials praised Farmajo for dereliction of duties and obligations to the well-being, stability, and future of the whole region.

IGAD, lamely, ‘commended  (Somalia on ) the resumption of the talks between the Federal Republic of Somalia and Somaliland, and appreciated the role of regional leaders and the region in hosting and facilitating the talks’.

What, exactly. the statement meant in real value is anybody’s guess.

IGAD, obviously, knew all to well that Somalia had everything to gain from the Somalia-Somaliland dismal state of affairs as relating to the talks and their non-resumption while the people of Somaliland resources, foreign aid, development, statehood, access to international finances were all on hold on Mogadishu’s behest.

Thirdly, the plenary session gave Mr Farmajo a white card to continue with the dictatorial, heavy-handed actions. Villa Somalia’s authoritarianism was already proving counter-productive and inhibitive to both the timeline laid for the Somalia parliamentary and presidential ‘selections’ and to the implementation of the agreement he reached with member states in September. The opposition candidates have already written to regional bodies and international partners outlining existing concerns and how, if not addressed properly, said concerns can develop into costly situations.

IGAD, though, apparently approved all of Farmajo’s measures to make sure that no election/selection happened on schedule dismissing all concerns.

“Noted the preparations Somalia is making for federal elections in February 2021 and to this end, welcomed the Somali-led and Somali-owned 17th September 2020 Agreement and the Protocols signed between the Federal Government and the Federal Member States’ leaders,” the IGAD statement said.

To appear that it was marginally aware of some noises opposing Farmajo’s plans, the Communiquè blandly added:

“Further noting the importance of implementing the Agreement, called upon the Federal Government, Federal Member States and other stakeholders to resolve any electoral management disputes through confidence and consensus-building in a manner that respects the spirit of the Dhusamareb process and the Agreement of 17th September 2020 on the revised election model as well as implementation protocols, so that timely elections embraced by the Somalia people can take place,” which meant nothing when one has already approved ‘the preparations Somalia (was) making for federal elections in February 2021’.

In a similar vein, the Assembly gave PM Abiy Ahmed complete approval of his invasion of the Tigray region and the reported human rights violations which followed.

The two combined signal an official consent to the violability of human rights, democracy, stability, and the sanctity of human lives. There was nothing to it if they had to be shunted aside if there was a threat to one’s leadership, the communiquè seemed to say.

This is IGAD as of December 2020 addressing critical issues in the region.

FIND THE COMPLETE TEXT  HERE And As BELOW: