Returning from a five-day visit to the Republic of Djibouti, President Musa Bihi Abdi stopped at a couple of places along the way.

One of them was Agabar, a village that came under the Gabiley administrative district, and about 52 kilometers northwest of the capital, Hargeisa. 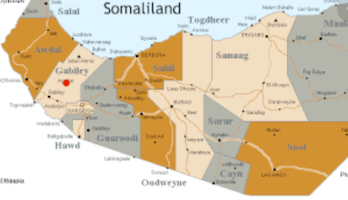 Addressing a welcoming throng at the town’s public square, Tuesday, the President made a number of references that greatly angered a majority of the Somaliland population who watched him on TV.

“It was a divisive speech which had the potential to create more rifts, uncalled for civil strife where it should’ve been a healing salve from a sitting president,” Engineer Faisal said Thursday.

“The speech.” he said, “was symptomatic of how far things have deteriorated to at this juncture of time”.

“The president said he was the Head-Chief of the clan which won the (presidential) elections,” he pinpointed.

“I wonder if the President prefers chieftainship of a clan to the presidency of the whole nation,” he barbed in his usually jesting tone.

Social media posts on both Facebook and Twitter were equally critical of the President’s imprudent references some of which cannot be republished for ethical reasons.

The president has to pay attention to his utterance as his words can be easily distorted or taken out of context.

The enemies that want to derail Somaliland from the path of stability are many and anything that could help them sow discord between the people should be avoided.

First, he portrayed the election and the acceptance and/or rejection of the 2017 presidential election which he and his Kulmiye party won as contention between clans.

“It took us a year and a half to heal the (metaphorical) wounds sustained during the election. The defeated clan(s) took it to heart believing that they had been bested, vanquished beyond redemption and that even their girls will not be eligible for marriage due to the shame inflicted,” he said at one point in his speech.

Juxtaposing western Somaliland regions against those in the east, the President said that starting from Berbera (Sahel region) westwards, the country was peaceful, green, and well educated.

“We of the western regions – starting from Berbera – are lauded for being peaceful, green (as in farming), and educated,” he said, placing himself squarely in the center of one part of the country which showered with praise against the other.

The President was criticized for forgetting that he belonged to both parts as he was a president to BOTH.

Continuing on this vein, the President at another point called himself the elder/chief of the areas in the west which he expressed pride in.

Together, the three avoidable references painted the President at best as a leader who could not fathom how powerful words could heal or hurt a nation.