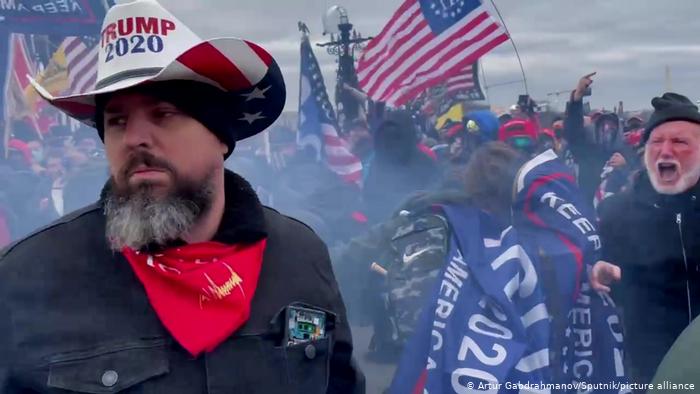 Africans are responding to the chaos at the US Capitol with irony, sarcasm and humor. #Trump started trending on Twitter in places like Nigeria, South Africa and Kenya as the platform blocked the US president.

Africans are astonished at the disarray around the US seat of power — especially those Africans familiar with the playbooks of leaders who refuse to concede defeat, who carry out coups or who incite political violence.

The continent’s leaders have so far stayed mute on Wednesday’s events in Washington, which saw Trump supporters storm the Capitol building.

But former Nigerian President Goodluck Jonathan, who famously made a phone call to concede his defeat and congratulate his successor, Muhammadu Buhari, in what was an unprecedented move for the country, gave Trump a stern reprimand.

Trump could be an African leader

As for average Africans, many seemed unable to resist having a little fun at the expense of the outgoing US president.

“Trump should just pull off his mask and tell us which African country he’s from,” a Twitter user in Zambia remarked.

Trump never visited the continent but famously called African nations “sh*hole countries” in 2018. He also made unkind comments about prospective immigrants to the US from Nigeria.

Some Nigerians drew parallels to what has happened in their own country, which is notorious for election disputes.

As a result, Nigerians look enviously to the US as a country with a exemplary transition system.

Not any more, though. 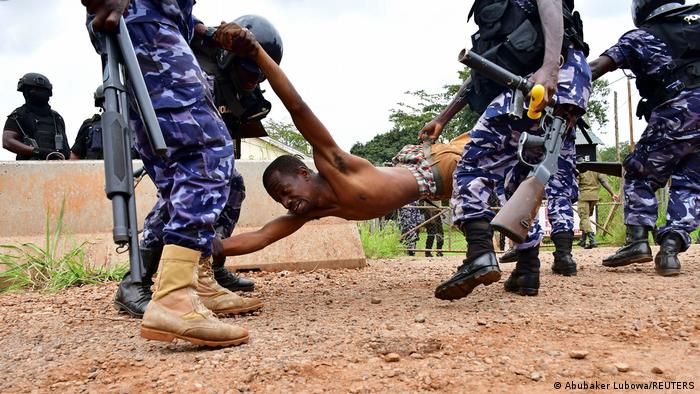 President Yoweri Museveni of Uganda has targeted Bobi Wine, his much younger main opposition and those who support him, ahead of the January 14 presidential vote

Storming of Capitol building was an ‘attempted coup’

Uganda is set for its own crucial presidential election on January 14, when incumbent Yoweri Museveni is to face off against popular singer-turned-politician Bobi Wine.

“What happened when the Trump mob stormed and stopped Congress from certifying the results of a duly elected president was an attempted coup,” Museveni ally and campaigner Morrison Rwakakamba told DW.

In Somalia and elsewhere in the Horn of Africa, people followed the events in Washington in horror, disbelief and bewilderment.

“What was so shocking is the behavior that was displayed by most of the leadership of the Republican Party in the US,” Adam Ow Hersi told DW in Mogadishu. “We could see some of them were enabling, others were indifferent and others were outright inciting the violence in Capitol Hill.”

Like Uganda, Somalia and Ethiopia are gearing up for elections this year. Some opinion makers in the Horn of Africa have expressed concern that the incident in the US might set a bad precedent for the region.

In the Democratic Republic of Congo, a country with a history of coups, political turmoil and violence, citizens told DW correspondents what they thought of Wednesday’s events.

“This is proof that electoral processes are not only being attacked in Africa,” said Mukubua.

Dina, another Congolese, quipped: “Stay calm, otherwise we’ll send you our electoral commission to sort everything out.”

Call in the African peacekeepers

“If these domestic terrorist and extremist activities were happening in any of the countries in the Global South, these imperialist nations would have condemned and threatened intervention by now. Where are our leaders in the African Union?” one of them read.

Twitter users responded to Shivambu with calls for the AU to send peacekeepers.

Others pointed out that Africa doesn’t always come out worse when it comes to supporting democratic institutions.

“Worth noting that when [former South African President Jacob] Zuma made similar noises ahead of being ousted, South Africa’s military very decidedly came out in favor of law and order,” local commentator Verashni Pillay wrote.

Romanus Msigala in Tanzania, meanwhile, just appeared perplexed: “Do the US security forces not exist?”

To sanction or not to sanction?

For Zimbabwe, the developments at the US Capitol meant the shoe was suddenly on the other foot. The contentious issue of longstanding and crippling US sanctions on the southern African country triggered some irony and provoked much laughter.

On Twitter, President Emmerson Mnangagwa stated: “Last year, President Trump extended painful economic sanctions placed on Zimbabwe, citing concerns about Zimbabwe’s democracy. Yesterday’s events showed that the US has no moral right to punish another nation under the guise of upholding democracy.”

The Twitter hashtags #America, #Trump, #TheUS #Democracy were trending for Zimbabwe and jammed WhatsApp traffic within the diaspora. And many were delighted at the news that someone born in Zimbabwe is a spokesperson for the DC National Guard mobilized after the Capitol storming.

‘All is not lost’ for the US

Abuu Ali in Tanzania said he believed that Trump’s goal had been to undermine the peace and stability of the US and “to incite hatred between whites and Americans of African descent in order to gain strength and stay in power.”

Hamad Said, also in Tanzania, called the developments “a great shame for the American nation that calls itself the mother of democracy in the world.” 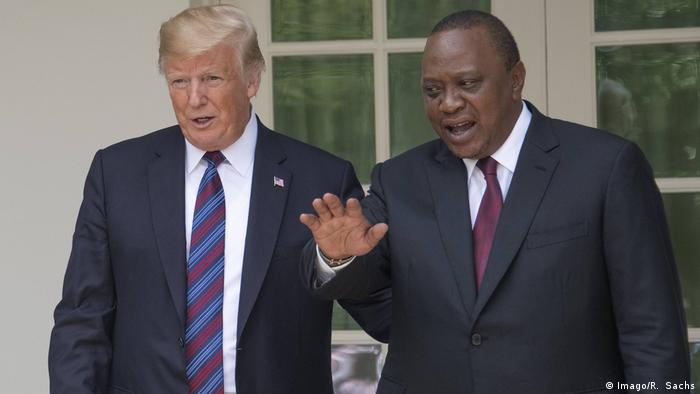 Donald Trump has never touched African soil, although he has met with African leaders, such as Kenya’s President Uhuru Kenyatta

But in Kenya‘s capital, Nairobi, Nyaigoti Chacha told DW Kiswahili that all is not lost, “although Donald Trump had tried so hard to undermine the country’s democracy.”

“I think we can still say that US is still a role model of democracy,” Chacha said. “After today’s riots we have seen the Senate and Congress certify President-elect Joe Biden’s victory and therefore he will be sworn in by the 20th.”

In Ghana, citizens are preoccupied with the outcome of their own presidential election. On Thursday, days after the opposition challenged the vote in court, incumbent Nana Akufo-Addo is being sworn in for a second term.

When Trump expressed his disdain for Africa with an expletive, Akufo-Addo famously shot back: “We will not accept such insults, even from a leader of a friendly country, no matter how powerful.”

he will not accept such insults, even from a leader of a friendly country, no matter how powerful.”