Home Law & Order Joe Biden is Now President, but Trump has Changed the US for... 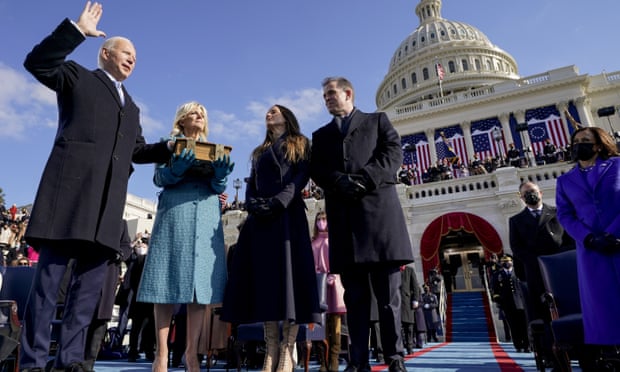 Biden’s warm inauguration words will not reset the dials. The era of US global leadership can’t be rebuilt quickly, if at all

Donald Trump departed today from the American presidency as he arrived four years ago: vain, cruel and telling lies, without any vestige of grace or magnanimity.

There was no acknowledgment of, still less apology for, his deranged delinquency in the face of Covid, or of his election defeat – failures that made the nervy, locked-down inauguration of Joe Biden inevitable. But Trump leaves having changed America.

Biden did his best today. He had been absolutely the right candidate to defeat Trump at the polls. He calmly outsmarted the incumbent through the campaign; his appointments have been good; and there is no one in American politics better placed to begin the healing of wounds that ran through everything he said at the inauguration.

The address by Biden on Capitol Hill did not mention Trump by name, but it was saturated in his blowhard predecessor’s divisive legacy. The riot of 6 January hung over the occasion, the speech and even the images. The speech struck necessary and reassuring notes of realism, humility, hope and consistency. It was wholly unTrumpian. But Biden cannot remake America by trying to lead it back to a better yesterday. That would fail.

To describe it as a presidential inauguration without parallel is to risk a lack of historical awareness on the one hand or journalistic hyperbole on the other. America, its institutions and values have survived civil war before, as well as assassination. America will probably survive the horrors of Trump’s corrupt tenure, which Biden called “this uncivil war”. But survival may no longer be enough in an America that has been led too close to the brink of a deeper conflict by a wanton leader, abetted by a weak-willed party, an elite of morally supine tech companies and the lie machines of Rupert and Lachlan Murdoch.

Yet it is also true that Trump is not a one-off. Consider this: “American politics has often been an arena for angry minds. In recent years we have seen angry minds at work mainly among extreme rightwingers … But behind this I believe there is a style of mind that is far from new and that is not necessarily right wing. I call it the paranoid style simply because no other word adequately evokes the sense of heated exaggeration, suspiciousness, and conspiratorial fantasy that I have in mind.”

Each one of those words could have been written this week. In fact, the historian Richard Hofstadter wrote them six decades ago, after the failed 1964 presidential bid of the rightwing Republican Barry Goldwater. Hofstadter drew the argument not only from the delusions of the 1960s, but from a line of conspiracy theories that stretched right back to the French Revolution in the 1790s and forward to McCarthyism in the 1950s – and beyond.

This tells us two things that need to be remembered in the light of the Biden inauguration. The first is that the battle to extend and bolster democratic values needs to be as sleepless as the tradition of those who oppose them. Biden’s words, that “disagreement must not lead to disunion”, indicate the scale of what is at stake. Disunion can wreck a nation.

The rioters of 6 January adhere to what the columnist David Brooks calls a “violent Know-Nothingism that has always coursed through American history”. They sometimes see themselves as refighting America’s 18th-century war of independence. It is more accurate to see them as refighting the 19th-century civil war from the side of the Confederacy, whose racial legacy still scars the United States 150 years later. They have to be punished and defeated.

Biden said nothing about that. Yet, as the Economist said last week, you do not overcome division by pretending that nothing is wrong but by facing it. The US senate has to finish the job by convicting Trump too.

The second lesson is that, while America sometimes echoes and influences the politics of other nations, including Britain’s, it is also extremely different. In most respects, and far more than many politicians elsewhere understand, the United States follows its own distinct path. It is a foreign country, and the better you get to know it the more aware of that you become. Trump has turbocharged that. This is the America that Biden now leads.

Foreigners, especially English-speaking foreigners, need to control their delusions about America. Until 2017, every inaugural was watched from Europe as a statement of the terms on which our own politics here would be set for the coming years. Trump changed all that. American carnage broke the dials, which sadly the former British prime minister Theresa May failed to see. Biden’s warm words now will not reset the dials. There was surprisingly little in his address about foreign policy. The future of America’s place in the world is not definitively settled by the change of administration.

Trump lost the election, but he has changed things for a generation. Biden’s address was an implicit acknowledgment of that. The European nations, Britain included, need to grasp the same thing. Just as the era of American domestic bipartisanship remains for the foreseeable future a thing of the past, so the era of American global leadership is not for rebuilding quickly or perhaps at all.

Under Donald Trump, the arrogance of global greatness came perilously close to breaking America. If Biden and his successors fail, that may still happen. But Brexit has shown that Britain suffers from an arrogance of greatness all of its own. Britain is a vessel sailing the oceans in the dark without charts or lights. Biden’s America will not come to the rescue any time soon. It has its own problems to solve.

By
Martin Kettle
Source: The Guardian