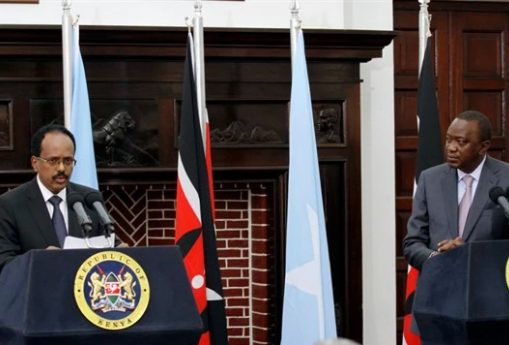 Despite already facing a slew of difficulties, including rising unrest over stalled federal elections and an increased risk of extremist violence after a recent U.S. troop withdrawal, Somalia appeared to provoke a new crisis this week. The government is threatening to quit a grouping of East African nations after the bloc’s other members sided with Kenya in a spat between the two countries.

Nairobi says Mogadishu is escalating the diplomatic row to distract from its troubles at home. Regardless of the intent, experts warn the move could further isolate Somalia at a fraught moment and hinder regional efforts to contain al-Shabab, the Somalia-based al-Qaida affiliate.

The Somali government broke off diplomatic relations with Kenya in December, accusing Nairobi of violating its sovereignty. The decision came a day after Kenyan President Uhuru Kenyatta hosted leaders from Somaliland, a self-declared state in northern Somalia that is still claimed by Mogadishu.

Leaders from the Intergovernmental Authority on Development, or IGAD, an eight-country regional trading bloc, launched an investigation into those complaints in an effort to ease tensions. They also considered Somalia’s allegations that separatist groups operating in the country’s semi-autonomous Jubbaland region, on the Kenyan border, are being armed by Nairobi.

The IGAD mission found no evidence to support the claims. “These grievances, some of which are longstanding, do not appear to justify a diplomatic separation between Kenya and Somalia,” it said in a report issued Tuesday.

Somali officials were in no mood to receive the report. A day earlier, fighting broke out between Somali forces and local militias in Jubbaland’s Gedo region. Mogadishu accused Kenya of equipping and hosting the militia before the attack, which left at least 11 people dead, though the Kenyan government denied any involvement. Against that backdrop, Somalia warned Wednesday that if the “baseless and unfair” report is not withdrawn, it may quit IGAD.

If Mogadishu’s intention was to distract from domestic pressures, as Kenya hinted in its official response to the IGAD report, it did not succeed. U.N. special envoy James Swan delivered a warning this week that presidential and parliamentary elections are not likely to happen by the Feb. 8 deadline set by the government, taking the country “into unpredictable territory.” The central government remains locked in a disagreement with state leaders and opposition parties over technical issues, like voter registration and the composition of key election committees. And concerns about security overshadow the whole process.

Al-Shabab controls vast swaths of the country and there are fears it will attempt to violently disrupt the voting process. The withdrawal of U.S. special forces will further complicate efforts to prepare for the vote, as Peter Kirechu explained in a December WPR briefing. It also leaves the government even more dependent on an African Union peacekeeping mission, AMISOM, which draws its troops largely from countries, including Kenya, that belong to IGAD—the same bloc Somalia just picked a fight with this week.