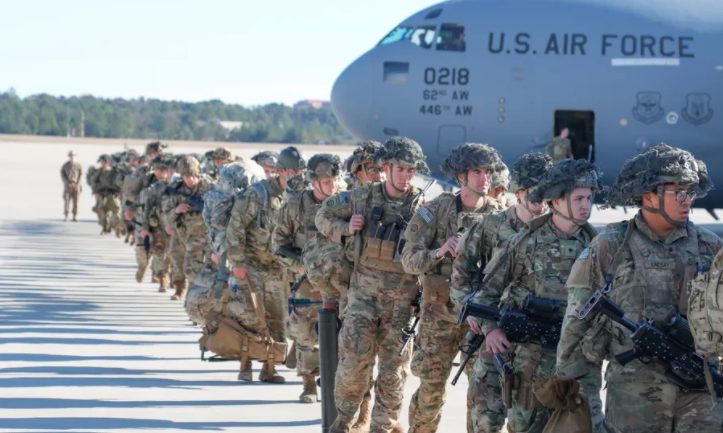 President Joe Biden is backing a new congressional effort to replace the legal authorizations that presidents since George W. Bush have relied on to conduct wars and counterterrorism operations in the Middle East and beyond — a signal that Biden is willing to curb his own extensive powers in the name of returning more war authority to Congress.

Several past presidential administrations have relied on two authorizations for the use of military force — known as AUMFs — to carry out military operations from Iraq to Afghanistan to Somalia to Syria. The 2001 version greenlit the fight against al-Qaeda in Afghanistan after 9/11, and the 2002 iteration gave Bush Congress’s blessing to invade Iraq — a measure then-Senator Biden voted for.

Since then, Republican and Democratic administrations have broadly interpreted those authorizations as giving the US permission to, among other things, hunt down terrorists around the world, including assassinating Iranian Gen. Qassem Soleimani in Iraq. However, presidents still said they still held the ultimate authority to wield the military as needed in their role as commander in chief.

Concerned about the ever-widening use of force based on these authorizations, lawmakers from both parties have for years wanted to repeal the current AUMFs and replace them with updated and more limited versions, but rarely received enough congressional or White House support.

Earlier this week, Sen. Tim Kaine (D-VA) and Sen. Todd Young (R-IN) introduced a bill that would repeal the 2002 AUMF and a 1991 measure that paved the road to war with Iraq. “Congress has a responsibility to not only vote to authorize new military action, but to repeal old authorizations that are no longer necessary,” Kaine said in a statement.

That announcement came days after the US bombed a facility in eastern Syria used by Iranian-backed militias to smuggle weapons, an operation designed as retaliation for those militants’ attacks on US and allied personnel in Iraq. The move angered a bipartisan group of senators and representatives because Biden didn’t seek congressional approval for those strikes — though he didn’t invoke the 2001 or 2002 AUMFs.

Now Biden, according to his team, agrees the AUMFs behind decades of war should go.

“We are committed to working with Congress to ensure that the authorizations for the use of military force currently on the books are replaced with a narrow and specific framework that will ensure we can protect Americans from terrorist threats while ending the forever wars,” White House press secretary Jen Psaki said in a Friday statement to Politico later posted to Twitter.

Psaki specifically named Kaine as “a leader on questions of war powers” who “has helped build a strong bipartisan coalition that understands the importance of Congress’s constitutional prerogatives.”

Biden’s team had sent signals in recent weeks that it would support such action. During his January secretary of state confirmation hearing, Tony Blinken told lawmakers that “it’s long past time we revisit these [AUMFs] and review them. In many instances, they have been cited and used in countries and against groups that were not part of the original authorization.”

But Biden’s stance doesn’t mean new AUMFs will soon come into place, or that America’s “forever wars” will end. In fact, it’s possible whatever measures Congress and the White House agree to — if they agree at all — won’t change much.

Experts and activists cite two main concerns about what comes next after the White House’s announcement.

First, it’s unclear that a new authorization will actually limit what Biden might want the military to do in the region.

If a new AUMF “is truly narrowly crafted and contains a sunset clause, then it could be a really important step in the right direction,” said Oona Hathaway, a professor of international law at Yale Law School. “But if it simply formalizes the forever war by creating a set of rules for using force in the Middle East in perpetuity, it’s not clear that’s an improvement.”

The new measure, then, must be written in a way that truly limits the president’s ability to interpret the law expansively. Back in January, four experts wrote in Just Security about how to do precisely that — namely that the authorization should end after no more than three years; specify the group the US is fighting against and for what purpose; and explicitly say that America isn’t authorized to strike any other organizations or other countries than those specifically named.

It’s still too early to tell, though, whether those or other criteria will guide the drafting of a 2021 AUMF. However, some would prefer Biden didn’t consider them at all and instead pushed for a complete repeal of the laws.

“Repealing the AUMFs only to replace them is not an end to forever wars,” said Stephen Miles, executive director of the progressive group Win Without War. “Going to war is supposed to be hard, and it is solely Congress’s constitutional decision. No genuine process should preordain that a new war authorization is necessary.”

Second, as mentioned above, Biden didn’t cite previous AUMFs for his Syria strike. He leaned on his Article II powers in the Constitution, which names the president as the commander in chief, thereby giving him ultimate authority over all military matters.

“I directed this military action consistent with my responsibility to protect United States citizens both at home and abroad and in furtherance of United States national security and foreign policy interests, pursuant to my constitutional authority to conduct United States foreign relations and as Commander in Chief and Chief Executive,” he wrote to congressional leaders in a letter last week.

This means a more specific, limited AUMF might not necessarily lead Biden to always seek Congress’s approval for a military attack. He might still feel legally justified in launching an operation if he feels such a move is needed.

The White House’s announcement, therefore, hasn’t ended a roiling debate about war powers. If anything, Biden’s stance has kicked it into overdrive.