SomTribune
Home Africa Ethiopia Are Ethiopia & Eritrea Behind The Status Quo In Somalia? 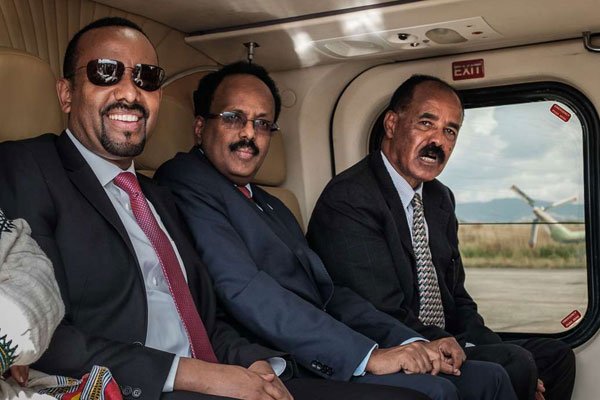 President of Somalia, Mohamed Abdillahi Farmajo, whose term effectively ended on February 8th has predictably clung to power like many African despots.

Like his mentors in the region, Messrs. Abiy (Ethiopia) and Afwerki, (Eritrea) he has even shown the extra dictatorial hallmarks of trying to assassinate his political rivals, including the two Presidents who preceded him and his former Prime Minister Mr. Hassan Ali Khaire.

In hindsight, it now seems that Farmajo has planned and calculated for years for this eventuality, and never intended to transfer power peacefully via a credible election or more precisely a selection, as is the case in Somalia.

Realizing that he cannot guarantee an outcome whereby he remains in power even after attempting to rig it by filling key electoral positions with Villa Somalia loyalists and members of his own intelligence service, he has breached all democratic norms in moves that would make Somalia’s late bloody dictator Siad Barre smile down from wherever mass murderers end up in the afterlife.

Mr. Farmajo has picked diplomatic scuffles with many nations such as the United Arab Emirates, Kenya, and Djibouti – countries that have supported Somalia’s successive governments to their detriment.

Worst, he has attempted to draw Kenya into an out all war with Somalia, although Nairobi’s defense forces are responsible for securing large swaths of Somalia’s south under the AMISOM mandate.

Without explicitly stating it, one of his major reasons for isolating Somalia is that these countries have some level of ties with Somaliland.

In his desperate attempt to cling to power, it seems that Farmajo is determined to turn Somalia into an Eritrean-style hermit state by torching every possible diplomatic bridge until its only allies are Ethiopia, Eritrea, Turkey, Qatar, and China.

The Somali National Army which was equipped and trained by the United States, United Kingdom, Turkey, Qatar, and others, have been used to do Farmajo’s bidding, and has all but withdrawn all units from the all-important fight with Al-Shabaab and repurposed them to his own loyal tribal militia to fight Jubaland – a Federal Member State, where US and Turkish trained units were recently witnessed beating wounded fighters from Jubaland captured in battle.

The same units are now being used against Farmajo’s political rivals and have been implicated in the assassination attempts of two former presidents and a prime minister.

Under Farmajo, Al-Shabaab has not only strengthened its chokehold on much of Somalia and especially the areas around the capital, but by the admission of the Minister of Finance, Mr. Baileh is “exceedingly efficient in tax collection” and other basic service delivery when compared to the Federal Government.

Farmajo’s administration has turned Somalia into the only safe haven in the world where a deadly terrorist organization goes unchallenged and can organize and plan successful attacks outside of Somalia, including the brazen attack on Manda Bay Airfield in Kenya where US service personnel were killed.

Mr. Farmajo has been circling the dictatorial drain for a while with frequent summits with Abiy and Afwerki and has been upfront about his disdain for democracy and the fact that changing governments every few years can be disruptive.

The outcome of these closed-door meetings remains a mystery but may explain how recruits of the Somali National Army ended up in Eritrea for training, and to their parent’s shock and horror were sent to fight the war in Tigray in Abiy’s “Law and Order” operation.

One of Farmajo’s often overlooked attributes is his cruelty, ruthlessness, and determination to stay in power at all costs, and for context, one must take into account Mr. Farmajo’s direct connection to Somalia’s former Dictator Mr. Mohamed Siad Barre under whose regime tens of thousands of innocent civilians were murdered. The brunt of Barre’s genocidal oppression occurred in the now-independent Republic of Somaliland, where major cities were systematically bombarded and razed to the ground.

In his Master’s thesis titled ‘U.S. Strategic Interest in Somalia: From the Cold War Era to the War on Terror.’, Farmajo almost gleefully framed the leveling of entire cities and crimes against humanity as an unfortunate event where civilians were caught in the crossfire between rebels and the government.

For a morally bankrupt politician like Farmajo, burning Mogadishu to the ground is a small price to pay for remaining in power.

Despite failing miserably to govern or make any gains against Al-Shabaab and spending much of his tenure undermining the long-planned elections, which at some point even the International Community naively believed could be held on a one person one vote basis; he has been very successful in hoodwinking the international community and its ambassadors.

The representatives of the United States, United Kingdom, European Union, and the United Nations behaved like chronic gamblers and have been doubling up their bets on Farmajo at every juncture, but worse, are now being completely co-opted.

They are unwittingly siding with him and are completely ignoring calls by the opposition, or the fact that they are being fired upon by the very troops they trained to protect the country, and are insisting that he can be trusted to implement the 17th August Dhusamareeb agreements.

The reputational damage to the United Nations and the countries whose representatives have turned a blind eye to Farmajo’s actions to drag Somalia into a civil war is immense and may take years to undo.

The United States Ambassador, Mr. Donald Yamamoto whose departure is imminent and was referred to as “former” by Congresswoman Karen Bass, his British counterpart who has been recently reassigned – Mr. Ben Fender, along with the head of UNSOM and Special Representative of the Secretary-General Mr. James Swan have given Farmajo carte-blanche from the early days, and have been willing partners in Farmajo’s lies to the global community about Somalia, and how it is making an imminent comeback.

Mr. Yamamoto has been instrumental in the Somalia debt relief and that the United States wrote off its massive debt, in an effort that was meant to bring Somalia back into the fold of the world community as a nation that has overcome wars, famine, and most importantly corruption.

None of this is true, and according to the London School of Economics, the process was not only rushed but was outright fabricated to make Somalia look more palatable.

SRGS Mr. Swan in his latest address to the Security Council raised the issue of the current election impasse but ignored the fact that Mr. Farmajo has been the single biggest obstacle to free and fair elections in Somalia, precisely because he failed to control and adequately mitigate against negative outcomes.

Mr. Swan has all but ignored the call of the opposition politicians for impartiality and has referred to their attempted assassination on February 18 in their hotels as “clashes”.

Mr. Farmajo, a former United States citizen from Buffalo, relinquished his citizenship on August 1st, 2019, 2 years and five months after becoming President, and while fully aware that the United States Law prohibits its citizens from holding such positions.

In the spirit of a fascist dictator, he and the Villa Somalia wrapped the act of renouncing his American citizenship as a nationalistic action for establishing further clout.

It is clear to those outside of his rabid following, that he had undertaken this action to avoid being prosecuted on US soil where he never planned to return.

More recently, Mr. Farmajo is using an entirely different calculus than the opposition, and Western diplomats who are desperately hoping that things will magically work out since his nexus with Abiy, the Horn’s latest pariah, and Afwerki, a leader who has starved and enslaved his people for decades – so much so that the west is actually powerless to do anything beyond issuing strongly-worded statements and all he really needs is Ethiopia and Eritrea to help pacify his opponents while Qatar and Turkey arm him and pay his bill.

There are limited options left for the International Community to become impartial and regain the trust of the people of Somalia and the first step is to recalibrate its assessment of Farmajo and how far is willing to go to remain in power.

Secondly, they need to recognize that he is the single biggest impediment to democracy and stability in Somalia.

In the case of the United States which is the biggest loser in Farmajo’s Somalia, despite the fact that Washington has spent the most on Somalia over the last 30 years and possibly lost many service members trying to help Somalia stand on its own two feet, it now has less influence than China who is actually getting the lion’s share of Somalia’s natural resources including the exclusive fishing privilege in Somali waters.

Ambassador Yamamoto has failed to keep Somalia away from the communists; and under his watch, Somalia could be sliding into a major civil war.

Indeed, Joe Biden’s new administration seems to take a tougher stance on issues of human rights, and specifically in the region have urged the Ethiopian government to allow humanitarian aid into Tigray. Biden is said to be considering appointing a Special Envoy to the region who may be the anecdote to Yamamoto’s years of diplomatic malpractice in Somalia.

Another unexplored leverage for the international community is to pressure and possibly censure its citizens who currently hold cabinet-level or political positions in Somalia to ensure their citizens are not implicated in further Tigray-style conflicts that are sure to follow Farmajo’s failure to hold long-planned elections and his unwillingness to transfer power peacefully.

There are existing laws that prevent naturalized citizens of a country from returning to their country of origin and serving in an anti-democratic regime that openly violates human rights and other international norms.

The United Arab Emirates and Kenya could be of tremendous help in ridding the Somali people of Farmajo as well by sanctioning the individual ministers above and in ensuring that Somali politicians are not hiding their ill-gotten wealth in their countries.

None of these ministers and members of Farmajo’s inner circle have renounced their foreign citizenship like Farmajo, and are legally exposed and would abandon Farmajo under the slightest pressure from their governments – an option that if exercised will produce results and possibly prevent another civil war in Somalia.