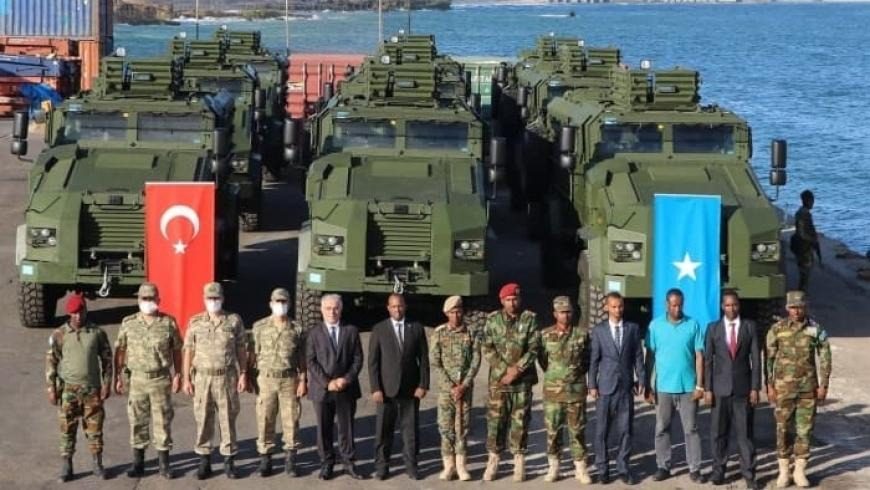 Turkey has sent a shipment of weapons and armored vehicles to Somalia during a season for foreign meddling in the country’s internal political affairs is wide open.

The opposition candidates and Puntland president Said Deni were already furious and expressed their concern about these weapons coming from Turkey into the country in such a “sensitive election period.”

They fear that the sophisticated weapons will be used by the Turkish-trained special forces to control forthcoming elections in the long-chaotic country that were postponed due to political disagreements.

The outgoing Somali president Farmajo whose mandate ended on February 8 could use Gorgor for “rigging” the election and this has put Turkey’s growing engagement in the country under the spotlight.

Last month, several protesters were killed and some wounded in Mogadishu during a peaceful protest against the delayed election when Harama’ad police trained by Turkey opened live bullets on them.

The Turkish-trained Somali troops are active in politics more than their role in the fight against Al-Shabab terrorists. The opposition Candidates condemned Farmajo’s attempts to use force for political gain.

In late 2017, Turkey has set up its biggest overseas military base reportedly cost $50m in the outskirts of the Somali capital, Mogadishu, increasing Ankara’s foothold in the nation. Camp TURKSOM has the capacity to train at least 1,500 soldiers at a time.

Speaking to BBC Somali service, President Deni warned security risks posed by Haram’ad and Gorgor soldiers who are considered to be loyal to the outgoing president after circling the airport, where he is staying.

Puntland president called on the international partners to play a role in addressing how Somali national army forces are controlled and who will be in charge of their commanding task since Farmajo’s constitutional powers to rule the country is over.