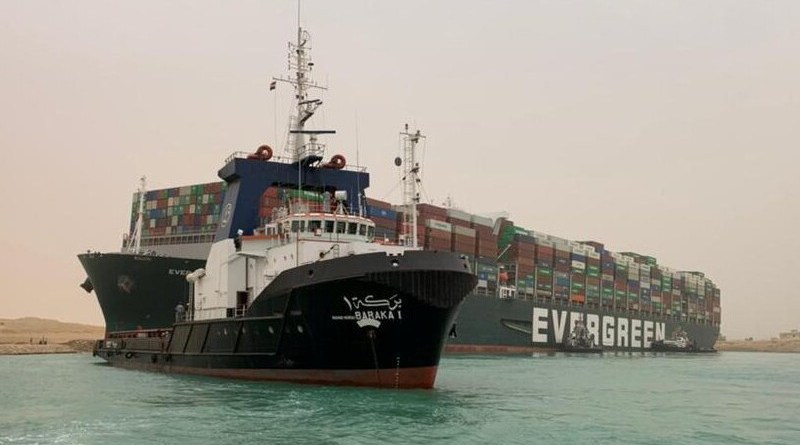 The grounding of the cargo ship Ever Given in the Suez Canal last week serves as a good opportunity to focus our minds on the future of the waterway and the wider Red Sea region.

The canal is a vital artery for the global economy, and so the $15 million a day Egypt lost as a result of it being blocked by the massive vessel for almost a week was dwarfed by the knock-on effect on the huge volumes of maritime cargo that passes through it each day.

The last time the canal was shut down, in 1967 at the outbreak of the Arab-Israeli War, it remained closed for eight years — so insurance underwriters no doubt breathed a sigh of relief on Monday when the 400-meter-long Ever Given was dislodged after less than a week and shipping resumed.

Nonetheless, the episode draws attention to a wider scramble for influence around the Red Sea and the Horn of Africa that puts the long-term viability of the Suez Canal as an international waterway at great risk.

A dream shared by the pharaohs, Alexander and Napoleon, the Suez Canal finally became a reality in 1869 through British and French supervision and financing. According to a speech given by Egyptian President Gamal Abdel Nasser in 1956, when the canal was nationalized, 125,000 Egyptians died during its construction.

It has been a highly politicized asset since it opened, and following nationalization it became a pawn in the Arab-Israeli conflict. In the past week its immense importance to global energy and food security was highlighted once again.

The Convention of Constantinople, signed in 1888 by the major European powers of the time, stipulates that the canal may be used “in time of war as in time of peace, by every vessel of commerce or of war, without distinction of flag,” which illustrates how its existence supersedes national concerns.

In reality, however, the canal has been subjected to military, naval and, as seen this week, commercial chokeholds. The accidental grounding of the Ever Given showed that the current management and operation of the waterway, by the Egyptian-owned Suez Canal Authority, might require the support of international organizations to avoid future incidents and, importantly, make improvements to better serve the needs of modern shipping operations.

Controversy surrounding the potential for the canal to be blocked again has been compounded by geopolitical concerns about the southern entrance to the Red Sea from the Gulf of Aden at the Bab Al-Mandeb (Gate of Tears), a strait that separates Yemen from Djibouti. A vital route for oil and gas transportation, its importance cannot be understated.

This is reflected by the proposed Bridge of the Horns project to build a 29-km bridge connecting the coasts of Djibouti and Yemen. However in keeping with its name, the strait has been affected more by calamity than prosperity, and the bridge project, which was due to begin more than a decade ago, has been repeatedly delayed, most recently by the civil war in Yemen. It now seems almost inconceivable that it will go ahead.

So important is the strait that Israel, among others, has called for its internationalization. Given the growing presence of competing foreign interests in the region, the prospect of the strait being blocked is too great to ignore. For many in the international community in particular, the US-led 1974 Suez Canal Clearance Operation to remove naval mines and wrecked ships after the Arab-Israeli War is still a recent memory.

In the same way in which the Soviet Union once increased its influence along the Red Sea through the former People’s Democratic Republic of Yemen and its Marxist allies in Ethiopia, present-day regional rivalries add another dynamic to the precariousness of the international waterway.

Turkey has gained a solid foothold in Somalia as a significant provider of aid, managing key port and airport infrastructures and backing the military while exploring offshore oilfields. China established its first overseas naval base in Djibouti in 2017 and has since strengthened its foothold there. It has established a free-trade zone in the country that is set to become the largest in Africa, and has financed the construction of the new Addis Ababa-Djibouti railway.

More recently, Tehran has attempted to lure Somalia to join the war in Yemen. It is little surprise, therefore, that Gulf states have sought to contain these plans by deepening their own economic and security ties across the region. The UAE has turned the Eritrean deep-water port of Assab into its main logistics hub for Yemen operations, hosting helicopters, jets and naval vessels. In 2017 it established a second base in Berbera, Somaliland. In 2018, Qatar signed a $4 billion deal to manage a Red Sea port with Sudan.

This military and naval buildup does not bode well for a waterway that is already a natural bottleneck. The events of the past week have made the vulnerabilities of the Suez Canal all too apparent. The depths of the Red Sea contain metals such as zinc, copper, silver and gold, alongside other elements such as cadmium, cobalt and, of course, hydrocarbons. These riches, which are yet to be explored or seriously exploited by any countries, could become a flashpoint for rival powers in the region, especially given the relative poverty of the states around the Horn of Africa.

The Canal has been closed five times in its history and no doubt will be again. The regional scarcity of deep water ports, and the prevalence of both drought and conflict create a situation that might motivate the international community to ensure navigational continuity.

Zaid M. Belbagi is a political commentator, and an adviser to private clients between London and the Gulf Cooperation Council (GCC). Twitter: @Moulay_Zaid