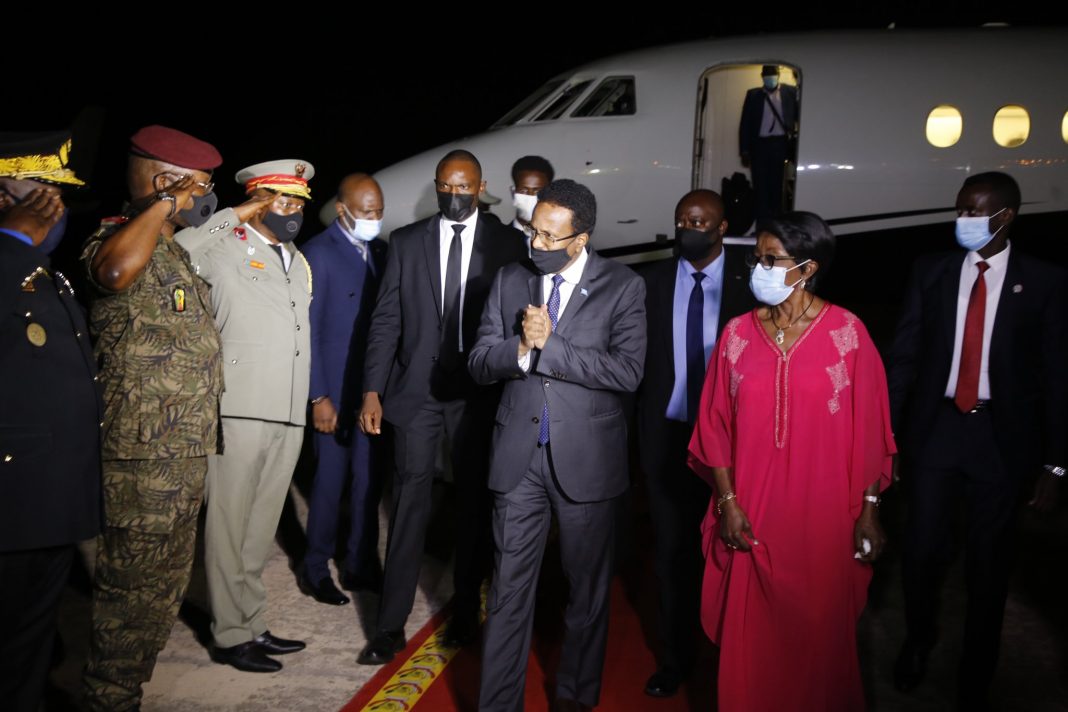 A day ahead of a scheduled visit of President Uhuru Kenyatta to the Democratic Republic of the Congo (DRC), the interim President of Federal Somalia, Mohamed Abdullahi Farmajo chose to pay an ill-advised visit to President Felix Tshisekedi.

President Antoine-Felix Tshisekedi doubled up as the incumbent Chairman of the African Union for the current year.

President Farmajo’s visit to the DRC, a statement from his office said, aimed at ‘strengthening diplomatic cooperation between the two countries and at the continental level in the areas of security, economy, poverty eradication and combating extremism’.

But the fact that the two countries neither shared trade links nor had cause to cooperate on ‘security, economy, poverty eradication and combating extremism’ escaped the office but did not others baffled by the visit.

DRC does not have a presence at all.

“During the visit, the two leaders will discuss how to further strengthen the bilateral relations between Somalia and the DRC,” the statement added.

“Somalia and the DRC enjoy a relationship built on mutual respect and cooperation for common endeavours, especially, the sustainable development of our people and countries,” tweeted Abdirashid Hashi, head of the President’s communication office to further explain why Farmajo had to shuttle hurriedly to Kinshasa.

But President Farmajo himself differed with his communication office.

“I welcome @ AfricanUnion to take a leading role in facilitating an election process in which every citizen elects their representatives through free and fair elections. All Somali stakeholders will actively participate in the dialogue on the future of our democracy,” he tweeted without saying he initiated the mediation idea – he or Tshisekedi.

The visit was embarrassing for the AU chairman for several reasons.

It came right on the heels of a firm abrogation of the term Farmajo extended for himself which the AU mission in Somalia, AMISOM and IGAD signed along with other international partners only a few days earlier. Follow up attempts Farmajo made to reverse the international community’s stance also abysmally failed.

Somalia, through statements from the President himself, Villa Somalia, the Ministry of Information and the Ministry of Foreign Affairs, had been decrying ‘foreign interference’ in its ‘internal affairs’ for so long now.

“National elections lie within the jurisdiction of the Republic and are independent to the people Government of Somalia. All govt agencies shall carry out their mandates using diplomatic terms & principles without tolerating any external interference,” Hashi was only tweeting a few days earlier – 12 April to be exact.

Osman Dubbe, Minister for Information, repeatedly pounded the slur on an international community that virtually held a tattered Somalia together for 30 years on viewers’ senses hoping that some will eventually believe the poor excuse.

They even blamed the failure of an implementation of the electoral model agreed upon on 17 September 2020 and the ‘necessity to extend the President’s term’ on never-named foreign elements.

Those elements included, of course, the AU, IGAD and EAC – especially Kenya, a very fast friend and an economic partner of the DRC.

The poor reception of President Farmajo at the N’Djili airport and the pointed absence of President Tshisekedi explained the situation. 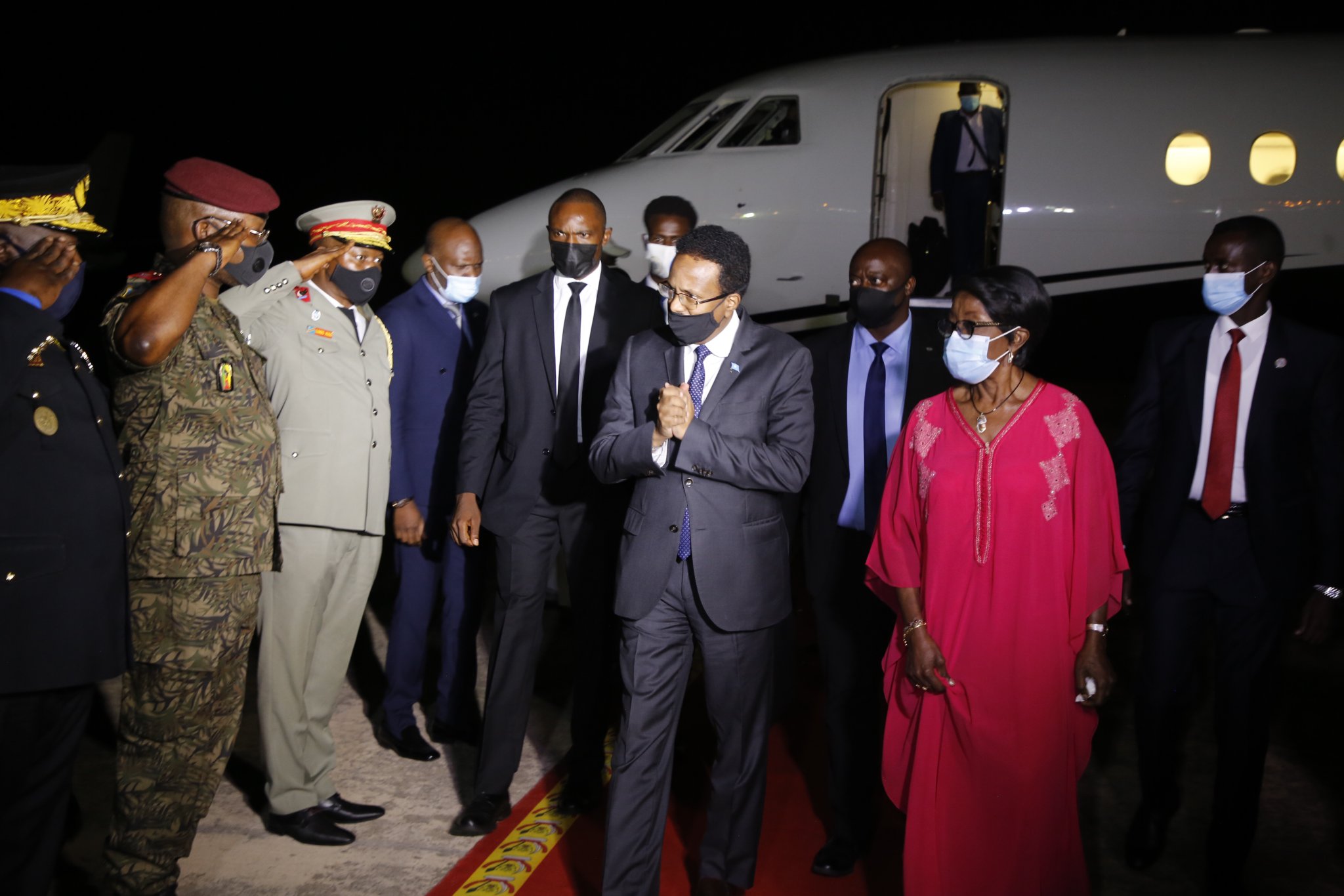 Farmajo and Tshisekedi briefly met the next day without producing much except a mild promise that the AU will look into the murky matter of the Somalia election deadlock later which will not, certainly, legitimize Farmajo’s unlawfully sequestered extension.

Contrasting the humiliating Farmajo visit, the Kenyan President, Uhuru Kenyatta arrived for a three-day visit at the same airport.

Not only the AU Chairman and President of the DRC, Félix Tishisekedi and half of his government come to the same airport to welcome Uhuru Kenyatta, the Kenyan President and the current Chairman of the EAC, but the reception was also completed by a whole fanfare which showed how deeply the two sides were connected: guard of honour, traditional dancers and a string of other events.

The DRC extensively used Mombasa for its imports.

Kenya has started a process leading to a consulate in Goma and an honorary consul to be placed at Lubumbashi to facilitate and keep the trade between the two countries go ahead at full steam.

These two areas alone accounted for 70 per cent of Kenya’s annual exports worth Ksh1.8 billion ($16.6 million) to the DR Congo.

On the same day he returned, Mogadishu slapped him with a pull-out of support of the largest clan in the region – the Hawiye.

Following a grand conference over 400 delegates held in the capital, a communique released to the press declared that the clan no longer saw Mr Farmajo As their President calling him to step down.

The Hawiye resolution drives the Farmajo political failure deeper home underscoring the message the international community has been him to understand: step back and return to the negotiation table.