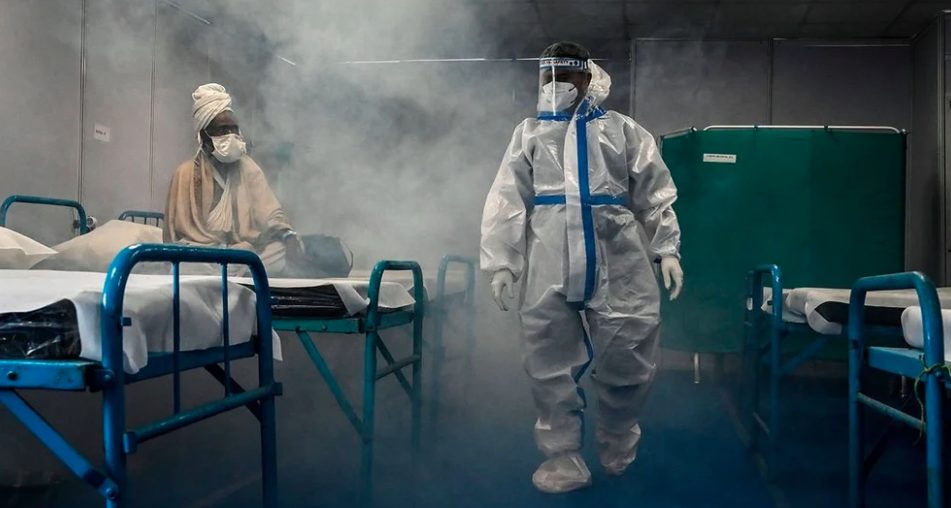 The government’s distraction and complacency have amplified the surge

April 14th was a big day in India. Hindus and Sikhs gathered to mark the new year. Many Muslims celebrated the first day of Ramadan at late-night feasts with friends and family. In Haridwar, a temple town that this year hosts the Kumbh Mela, an intermittent Hindu festival that is the world’s biggest religious gathering, between 1m and 3m people shoved and jostled to take a ritual dip in the Ganges. And across the country, the number of people testing positive for covid-19 for the first time surpassed 200,000 in a single day. It has continued to surge since, reaching 315,000 just one week later—the highest daily figure in any country at any point during the pandemic. Deaths, too, are beginning to soar, and suspicions abound that the grisly official toll is itself a massive underestimate. Makeshift pyres are being constructed on pavements outside crematoriums to deal with the influx of bodies.

This horrifying second wave is a catastrophe not only for India but for the world. Allowing the virus to circulate unchecked increases the risk that dangerous new strains will emerge. One worrying variant first detected in India, called the “double mutant”, has already been found in several other countries, including America and Britain. Even as scientists labour to understand how big a threat it poses, more variants are appearing.

A more immediate consequence of India’s second wave for the rest of the world is a disruption to vaccine supplies. India had hoped to be the world’s pharmacy. But with case numbers exploding the government has restricted exports of vaccines. In the first half of April India shipped just 1.2m doses abroad, compared with 64m in the three prior months. The Serum Institute of India, a private company that manufactures the AstraZeneca vaccine, has defaulted on commitments to Britain, the European Union and covax, a scheme to supply more shots worldwide. African countries that had been counting on India to provide them with vaccines are looking on in dismay.

With its crowded cities and rickety health care, India is not an easy place to curb an infectious disease. Yet some parts of the country were remarkably successful for a time at slowing transmission. Deaths from the first wave of the pandemic, which peaked in September, were surprisingly low, for reasons that are not clear. And Narendra Modi, the prime minister, was quick to institute a nationwide lockdown a year ago, albeit one that failed to plan for the millions of unemployed migrant workers who were at first corralled, destitute, in cities and then allowed to return to their native villages, taking covid-19 with them.

In short, until earlier this year, India’s government, like so many others, had a patchy but not disastrous record in fighting the pandemic. But through complacency and distraction, Mr Modi has allowed things to spiral out of control. In January he boasted, “We not only solved our problems but also helped the world fight the pandemic.” Yet in early March, as cases began ticking up in the opposition-run state of Maharashtra, his government, far from helping, attacked the state government in the hope of bringing it down.

Mr Modi’s unrelenting quest for partisan advantage has also been on display in West Bengal, one of four states holding elections this month. He and his lieutenants, like their rivals, have held countless huge rallies during a weeks-long campaign, without masks or any form of social distancing. This risks propagating the pandemic among the state’s 100m people, of course, but it has also distracted the government from fighting the spread of the disease. Amit Shah, Mr Modi’s right-hand man and the home minister, was on the campaign trail for 12 of the first 18 days of April.

That may help explain why Mr Modi’s vaccine policy has been such a shambles. By mid-February the government had ordered barely enough doses to protect 3% of the population (not counting those it is hoping to get from covax). Keen to promote India’s scientific prowess, regulators approved Covaxin, an indigenous vaccine, before it had completed all the necessary trials, even as they insisted that foreign shots must clear extra hurdles. Less than 10% of the population has received a first dose of vaccine. This is more than in many countries, but India is a huge vaccine-producer and could have done better.

There are signs of improvement. On April 13th the government announced fast-track approval for imports of vaccines that have been approved by various rich countries. It is also belatedly throwing money at procurement. This week it said it would release some $400m to help the Serum Institute boost production. Mr Modi’s Bharatiya Janata Party (bjp) called off its remaining big election rallies on April 18th. And on April 19th the government updated its vaccine policy to allow anyone over the age of 18 to get a shot, starting next month.

That is of limited use, however, given the shortage of supply that prevails in most of the country. Several states have already run out. India is vaccinating only 3m people a day, or 0.2% of the population, barely exceeding some rough estimates of the real number of daily infections. And even if production increases or more doses arrive from abroad, the current wave is too severe to be stopped by inoculations alone.

The irony is that, having won election after election, Mr Modi commands tremendous authority. He is India’s most powerful prime minister in a generation. The bjp controls both houses of parliament, and runs most state governments. If there was ever a moment to make use of all this clout, this is it.

Mr Modi should adopt strict curbs on mass gatherings right away—including the religious events he promotes as part of his Hindu-nationalist ideology. He ought also to be trying to limit travel around the country, without leaving migrant workers high and dry, as in his first lockdown. The health minister, who thinks diseases can be cured with the help of cow urine, must go.

Ways must quickly be found to ramp up vaccine production. That does not mean seizing control of private firms or their output, but rather helping them secure the supplies they need from countries such as the United States. Unless India’s second wave is brought under control, the entire world will suffer.