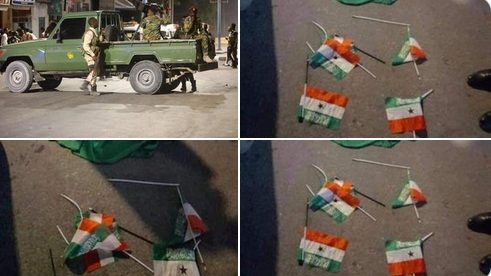 Members of the Somaliland community living in Mogadishu, Somalia, were hit hard by heavily armed security forces on Wednesday at a party they held for the 30th anniversary of the Republic of Somaliland.

The occasion at Elite Hotel at the Lido beach turned into turmoil after security forces stormed into the hall where the ceremony was well into a festive momentum.

The armed forces tore down the flags broke down the PA system and started beating the shocked youth with anything at hand: fists, gun butts, batons, chairs, etc.

According to the participants, the raiding forces even tried to tear tricoloured dresses the women wore, leaving some clinging to tattered pieces to cover themselves.

On similar occasions in past years, Villa Somalia used to ignore such occasions making them appear as if people were only celebrating the founding of another federal state – which the Republic of Somaliland never was. But it was a tack that worked for the Mogadishu administrations.

By hitting the revellers this year around, Villa Somalia awakened laggards and zealots who still thought a reunion of the erstwhile partners in the 1960 merger was possible – even after 30 years.

The Republic of Somaliland celebrated on May 18 thirty years of successful nation-building, stability and democracy which saw the impressive conduct of seven 1Person-1Vote ballotings since 2001.

Constituents elected three presidents, parliament and two, nationwide municipal councils to office, and are going to elect members of parliament and the third round of councillors come May 31, 2021.

That is a record Somalia cannot boast of. It is still selecting its presidents behind closed, highly barricaded doors.

On the other hand, a great many residents of Mogadishu, echoing a myopic Somalia view to a voluntary merger which turned sore, insisted that Somalia could only survive united.

Mogadishu residents' reaction towards the 30th anniversary of Somaliland, a self-declared state in the Horn of Africa, internationally considered to be part of Somalia. pic.twitter.com/ukNUNx6X3A

A few differed pointing out that a union that did not work was worse than an impracticable insistence on a reunion that Somaliland rules out.

The reunification point of view does not take into consideration that the merger was a voluntary act of two, hitherto unrelated Somali territories and that, by choice, they can separate if the union did not work.

The late and 2nd president of the Republic of Somaliland narrates here how Somalia absconded with the union narrative from Day 1. He recalls how neither of the Acts of Union each side prepared was debated, adopted or even discussed.

He said, not even him – the PM who led Somaliland to Mogadishu was notified before the Somalia-dominated parliament threw away both copies voting for a two-clause motion which said (a) Somaliland and Somalia were to unite, and (b) the union would be perpetual.