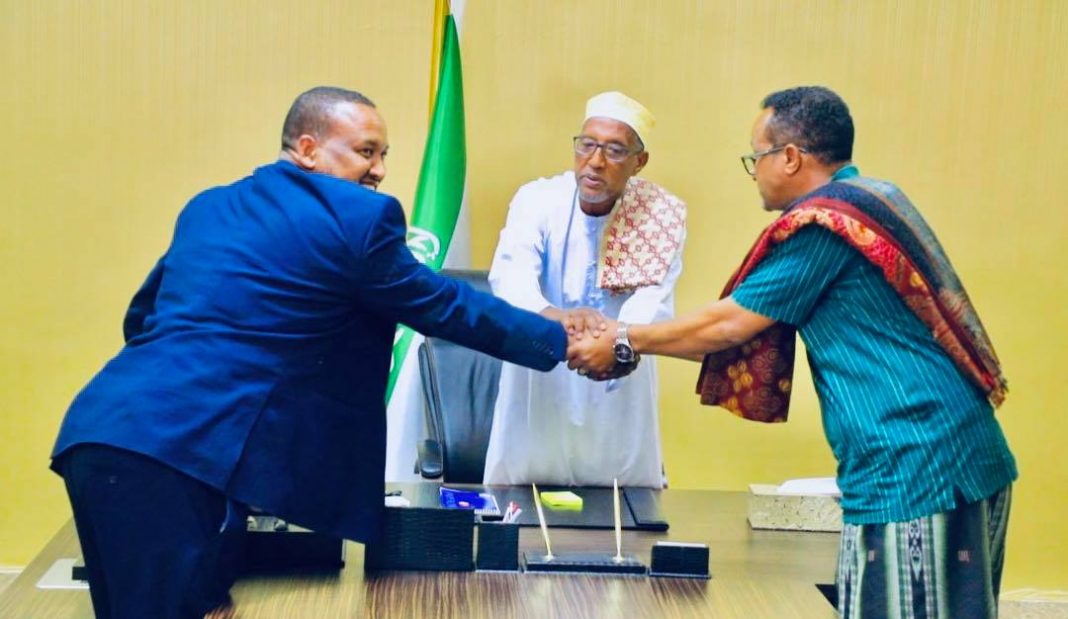 In another consensus-building morale booster, the President of the Somaliland Republic, Musa Bihi Abdi, lifted pall which began gathering around who was to be the next leader of the Hargeisa city council, Sunday, by convincing the most formidable competitor to the post to move aside.

President Bihi, following up on a promise he made to Abdikarim Ahmed Moghe and his closest supporter from the newly-elected councillors last Wednesday to support him not as as a President but as a mediator, received Moghe once more at the Presidency.

This time around, it wasn’t to let him know that he had no problem with him as a Mayor. It wasn’t also to show him again that he would rather have the councillor who campaigned on what changes he would bring about as a mayor if elected, thus getting the highest number of voters to show him they approved, but to practically lend him the boost he needed.

Moving behind the scenes, it appears, President Bihi convinced the former mayor of the city, Abdirahman Mohamoud Aideed ‘Soltelco’, who had the support of at least 7 new councillors behind him, to move aside.

President Bihi brought Moghe and Soltelco together at the Presidency where the latter announced that he was withdrawing from his candidacy to the mayoralty.

Abdikarim Moghe garnered over 26 000 votes of the electorate – nearly three times more than the nearest councillor’s.

“I requested former mayor, Abdirahman Mohamoud Soltelco, to withdraw from the race. I am thankful that Abdirahman accepted my request and withdrew unconditionally,” the President said.

President Bihi added that he decided not to watch a disruptive, contentious tug-of-war start between two young councillors from the sidelines.

“I was averse to let a divisive contention for the city’s top post develop between two young, popular candidates before trying to reconcile between the two sides. Grateful that it worked because of the positive attitude both showed,” the President added.

The President said it was only right that the councillor with the highest number of voter approval be given a chance to lead the city.

Abdirahman Soltelco stated that since he and Moghe were friends for more than twenty years in the past, he did not find it much difficult to accept the President’s call for abdication for the city’s sake.

“Moghe and I had no personal issues – and have none at present due to the candidacy at present. I will be his righthand man at his investiture come this Thursday. I promise to closely work with him and give him a chance to put his ideas to practice for the good of the city,” Abdirahman said.

Moghe on his part expressed gratitude at length to the President for positively supporting his candidacy to the mayoralty as a statesman since he was not mandated to decide who was to become the next mayor.

He also thanked the former Mayor for accepting the President’s mediation and letting him move on to assume the city’s topmost post.

Soon after the results of the country’s double elections were published, the two opposition parties of Waddani and the UCID flew to form a coalition that aimed to deny the ruling party from getting any of the top positions in parliament and at local councils around the 20 poll districts which participated in the election.

Together, the two bagged 52 seats of the 82-seat parliament to Kulmiye’s 31. Likewise, if they joined hands, the two could occupy above 90% of the two top posts of all elected local councils

As such, UCID was lining up for the mayoralty since Waddani made its intention to lead the parliament known.

At some point, Moghe also touched chords with the UCID contender, Abdisalam Cudhay and UCID party leader securing their support.

The president’s move, however, had the makings of changing assumptions. It was made more appreciable by the fact by letting another councillor who ran on an opposition party standard assume the powerful position of mayor of the capital city of the republic.

How in-house election for the speakership of the parliament would develop remains to be seen since Waddani – as a party – has a confirmed Mayor in the city.

The Republic of Somaliland has on May 31 concluded its 8th 1P-1V double election re-affirming the country’s strong bid for international recognition as the most credible democracy in the Horn of Africa and a confirmed peace-building trailblazer of over 30 years.

The elections were unhesitatingly declared free and fair by both domestic and international observers.