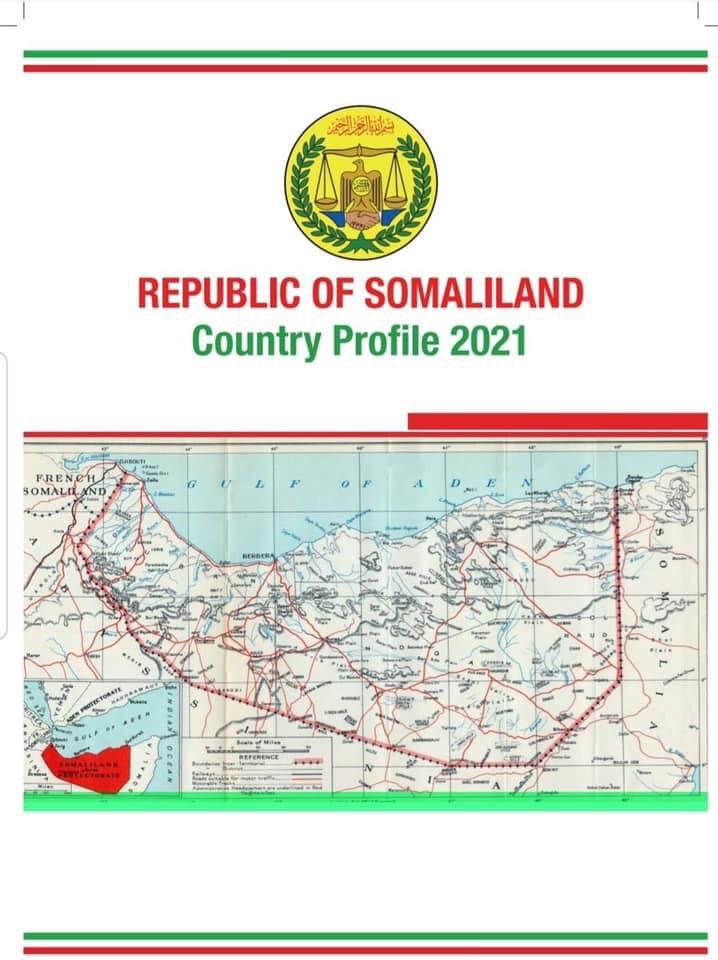 At the Grand Haddi Hotel, Hargeisa, the Republic of Somaliland launched the official country profile – the first of its kind since independence from Britain on June 26, 1960, before going into an ill-fated kind of kind with Italian Somalia the same year, Monday.

Neither did the country put together a country guide of this kind since it proclaimed reaffirmation of its sovereignty on 18 May 1991 the restoration of its internationally-acclaimed independence.

His Excellency the Vice President of the Republic, Abdirahman Abdullahi Ismail (Zeili’i), attending the event, spoke at length of how timely the publication of the abridged profile was at this juncture of time.

“I am extremely grateful to the Ministry of Foreign Affairs and International Cooperation for undertaking this national task which will go a long way in projecting correct facts about the country’s history, population, map, area and other relevant basic facts,” the VP said.

VP Zeili’i added that the government will see to it that all government institutions received copies of the profile. 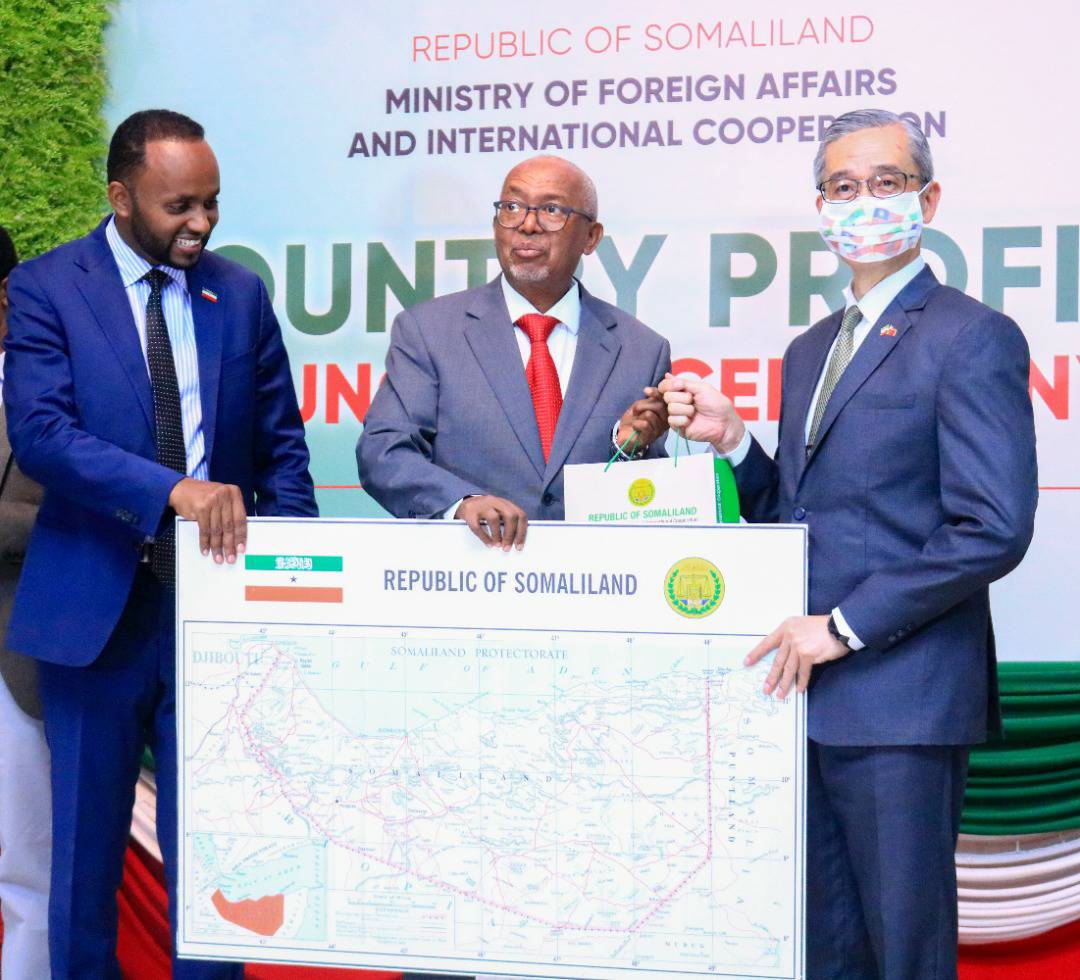 “From now on, every one of us must confidently use the basic facts that portray who we are, where we came from, where we are going, who our neighbours are and what boundaries we share and at where, and so on,” he added.

The Vice President also promised that the basic facts which the profile presented will be incorporated in educational syllabi and civic education schemes.

At the beginning of the ceremony, His Excellency the Vice Minister of Foreign Affairs – the Acting Minister, Liban Yousuf Osman, outlined the main pillars of the profile each of which gave a snapshot of an important facet of Somaliland.

“Putting facts and figures that positively and realistically projected the Republic of Somaliland was not easy. The Ministry initiated this project at a time the internet was inundated with false, derogatory information about Somaliland and maps that had no relation to reality, geography or history,” he said. 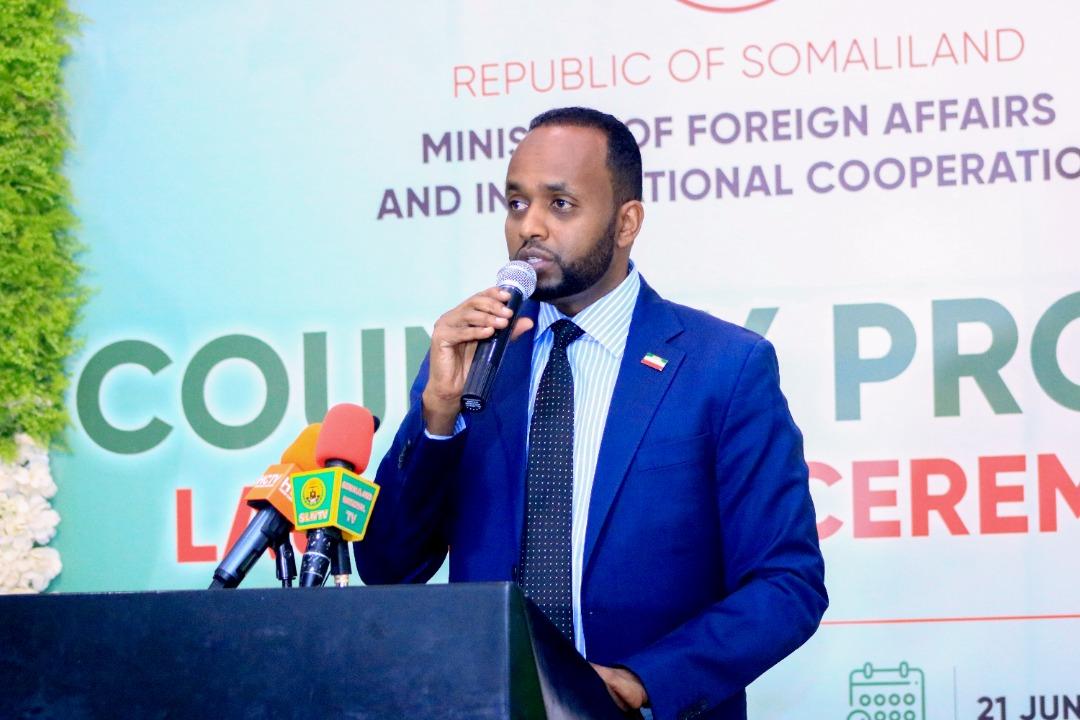 “The main areas we put emphasis on are eight, namely, government, geography, demographics, historical background, the rebirth of Somaliland, legal case of Somaliland, economy, and investment potential,” he said.

Minister Liban underlined that no more would Somaliland and Somalilanders rely on second-hand information and data that, more often than not, inflicted more damage, more confusion than it sought to elucidate.

He said the profile provided a correct, accessible overview of pertinent facts which asserted the country’s unique identity.

Minister Liban gave thumbs up to the team (led by Professor Hassan Heiss) that had put together the country guide, appreciating the time they put not only in gathering the information and putting it together but, also, in the long hours they put into refining it time and again.

Dr Saad Ali Shire, Minister for Finance Development, speaking at the event, advised that the government must make sure that the profile was launched in every region and that it be widely disseminated.

“Not only should we disseminate it internally but,” he added, “we need to educate Somalia om who we are, first”, he said drawing long applause. 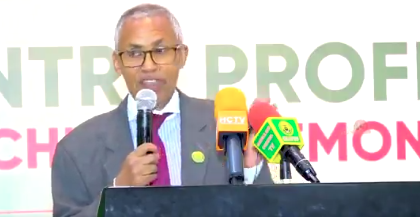 “Somaliland needs to make sure that a copy reached every head of state, head of mission and all international and regional organizations whether this is at the African Union HQ, the United Nations or the EU,” he added.

All government websites must provide space for the profile, he stated.

“If we are not seen or heard of, we will not be dealt with as living, existing entity,” he said.

Dr Edna Adan Ismail, the Presidential envoy for international recognition, expressed his pleasure at the publication of the guide. 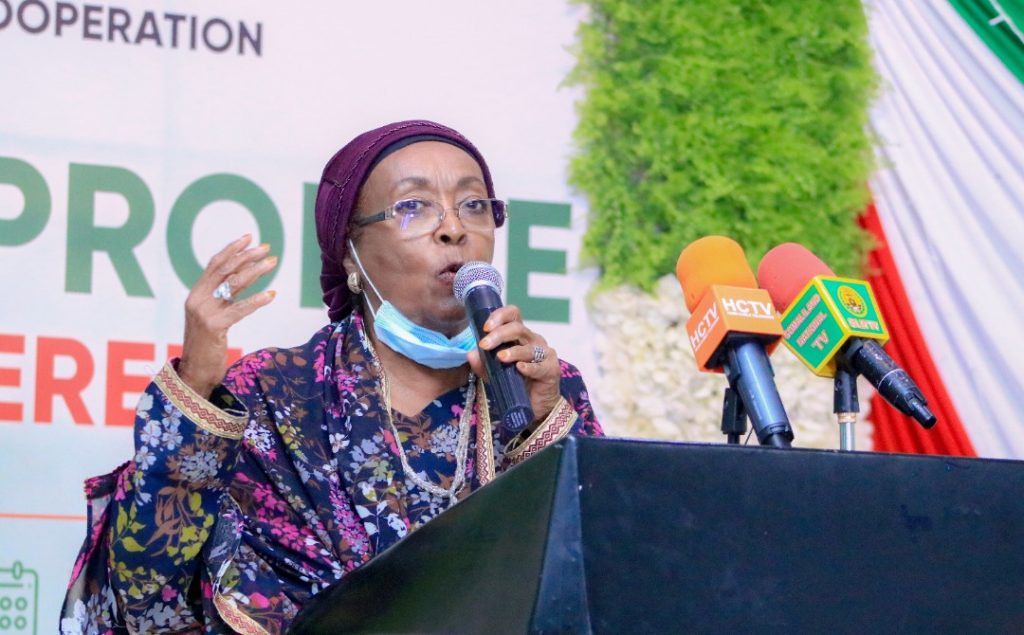 “This makes everyone’s life easier. Now, we have all the basic facts that correctly depicted this valiant nation, its history, borders, landscape, population, legal case and governance at our fingertips both digitally and in hard copy,” Dr Edna said.

“The Republic of Somaliland is not a small country, separated from a big country and also neither Somaliland is not part of the so-called Somalia Federalism but Somaliland existed in the past,  exists in the present and will exist in the future. The greed of Somalia will never change the existence of Somaliland“, Dr Adna Adan added.

Dr Edna added her felicitations to MOFA and its team.

The Ministers of Information and National Guidance, Suleiman Yussuf Ali Koore, and Mohamed Musa Derie of Water Development, also, warmly lauded the production of the Profile, speaking at length of who monumentally critical it was to sell the country image.

According to MOFA  tje progile will be updated regularly as is seen fit.

Present at the occasion were almost all ministries and parastatals, universities and representatives of international organizations and local business concerns.

The Head of Mission of Taiwan, Allen Chenhwa Lou, Chou Shuo-Wei (Amir) and other top mission officials were also present at the occasion.

“…delighted to join the launching ceremony of Somaliland country profile and to share the the joy of achievements. Tough time never last, but tough people do. Both Taiwan and Somaliland people are tough peoples,”  Ambassador Allen C Lou said.

This is a great achievement in this National and Independence month from 18th May to 26th June.#Somaliland’s relentless efforts and achievements will be recognized and respected by the international community as #Taiwan does. pic.twitter.com/sDsonDykKn

At the end of the occasion, the Vice President handed copies of the profile and a wall map of the Republic of Somaliland based on international boundary demarcations at the time of independence to each of the institutions present. 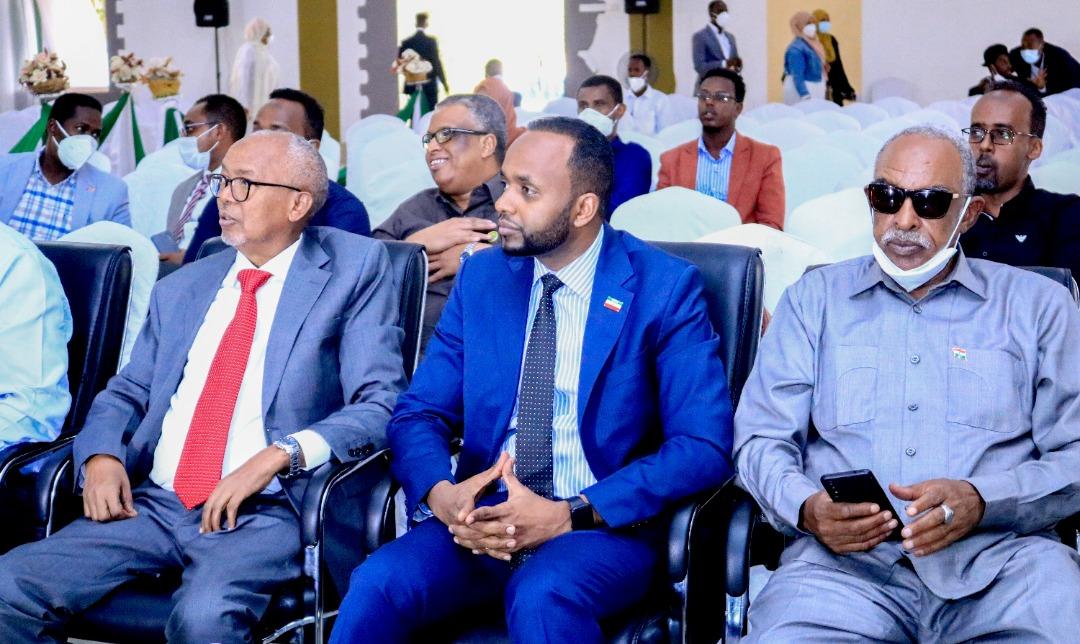 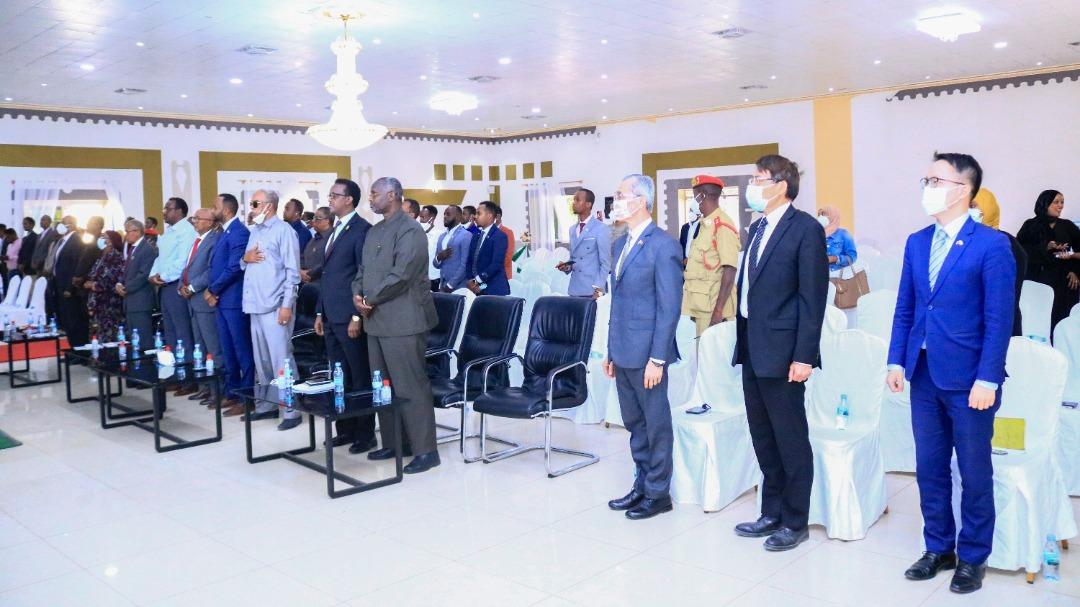 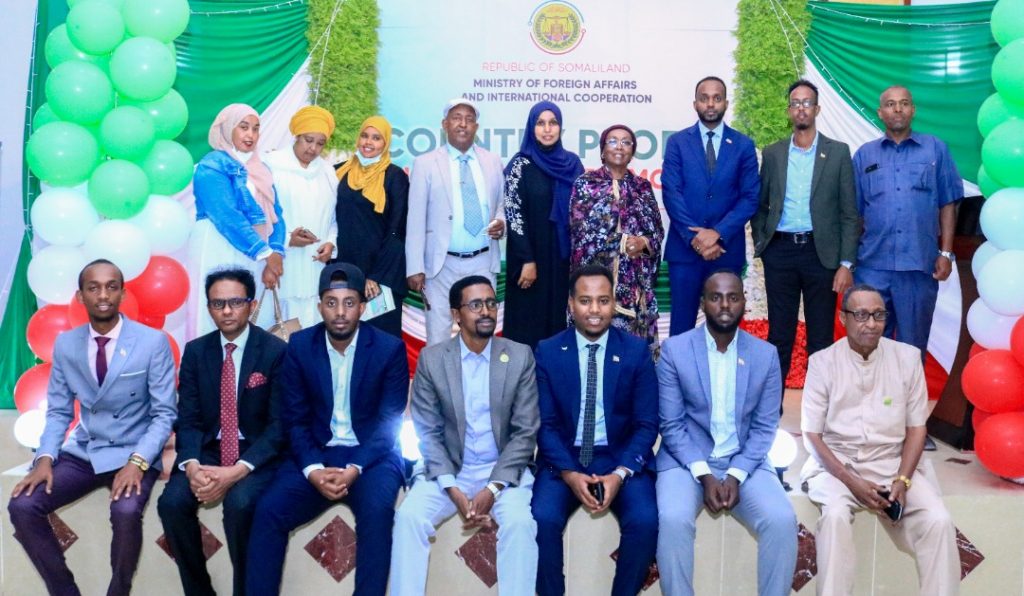