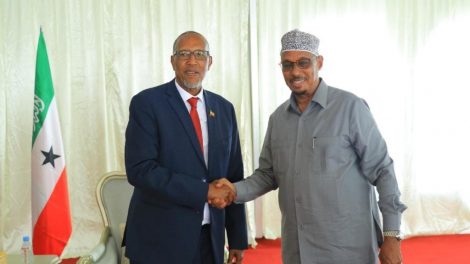 Kenyan leaders are ready to work closely with the Republic of Somaliland to build trade and social networks in the region.

Mandera Senator Mohamed Maalim Mahmoud says Somaliland has become a key ally of Kenya in seeking peace and security in the Horn of Africa.

He spoke at the Presidential Pavilion in Hargeisa, Somaliland, at a banquet hosted by Somaliland President Muse Bihi on the eve of the Commemoration of Independence of Somaliland from Britain on the 26th June 1960.

Mahmoud who was part of a strong Kenyan delegation of leaders and business people who graced the official opening of the expanded Berbera Port said Somaliland has made great strides despite lacking international recognition.

“I and other members of the Kenya delegation are extremely elated to be in Somaliland and to witness and celebrate with the people of Somaliland in two momentous occassions this week,” said the Senator.

“The first one is the Inauguration of the first phase of the expansion and modernization of the Berbera Port and launch of its second phase. That was a monumental infrastructural feat for Somaliland and our Eastern Africa Region as a whole,” he added.

He said Kenyans share Somaliland’s happiness and pride in this milestone achievement which will boost regional trade and investments and our overall goal of regional economic integration and shared development and prosperity.

“The second happy moment of our visit is to participate in the celebration of your independence from Britain on 26th June 1960.”

“This auspicious occasion is of great significance not just to the people of Somaliland but also to all of us, Somali Speaking people. It marks the day when the first free and independent flag by a Somali people was hoisted.”

He said that whilst Somaliland’s history as a nation and a people may have been chequered and with challenging and sometimes traumatic experiences, there are exceptional good aspects of the country’s history that are quite remarkable.

“As a leader from one of the five Somali territories, the NFD which shares with your people the unique bond of a cultural space, I can state that your gallant contributions and successes are acknowledged and makes all Somali speaking people proud.”

The senator at the same time said Kenyan leaders will offer themselves to assist and support the talks between Somaliland and the Federal government of Somalia so that an amicable solution that is a win for both parties is realized.

“In the meanwhile, we urge for resumption of the talks as soon as Somalia gets done with her elections to enable dialogue and negotiation between two parties with legitimate mandates.”