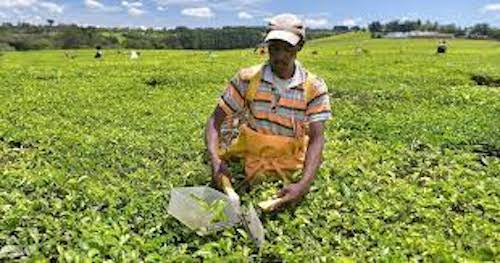 Some tea growers in Kenya are shifting to produce other crops as climate change threatens tea plantation in the country.

Once a hub to perfect tea-growing conditions, the world’s largest black tea exporter is now seeing the effects of climate change.

Rising temperatures, floods and drought pose a threat to tea plantations. Gabriel Mwatha Mbugua is a tea farmer and says he has switched to growing pineapples on part of his land.

“This tea was planted when I was young, 1959. During that time, we had a lot of rain, everything here looked like forest. So, there was a lot of rain and this tea was being plucked four times a month, after every seven days. These days when we moved on, the climate changed. When it changed, we are not getting as much rain as we used to get then. So now, instead of four times, we do it two times. Now, you see, you get half of what you were getting before. Therefore, I decided to change with the changing times, and I moved to pineapples because pineapples don’t need much rain”, Mbugua said.

A May 2021 report by Charity Christian Aid says that by 2050 the changing climate will slash Kenya’s optimal tea production conditions by over a quarter. This would hurt farmers and workers alike.

“We have reports saying that by 2050, the area that we are growing tea is going to like be half of what there is. And so, that means that areas currently that are growing tea, farmers that are depending on tea, are going to increasingly become more vulnerable as the climate continues to change. The area is also going to be unsuitable in terms of the soils, suitability of the soils, and also the rainfall amounts”, said Veronica Ndetu, climate change expert at Kenya’s, Ministry of Agriculture, Livestock and Fisheries.

But as experts mount warnings about the dangers of climate change, Kenya’s tea growers are already witnessing a drop in production.

Somaliland VP Returns US$6.7 Million to Traders Who Lost in the Waaheen Market Fire

Somaliland Fire Victims to Get US$500K Help from Taiwan