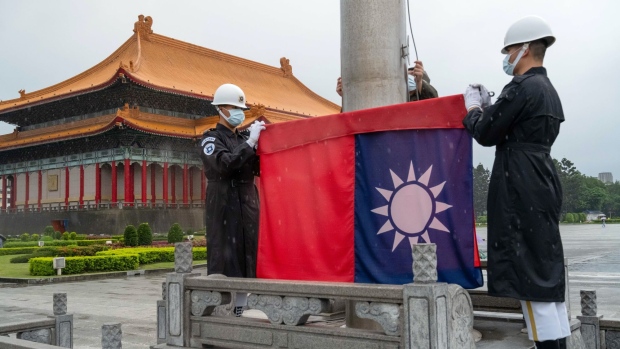 Taiwan will set up its first office in Europe using the name “Taiwan,” a move immediately hailed by the U.S. as a way for the island democracy to strengthen its diplomatic presence around the globe in the face of pressure from China.

The government in Taipei will open its office in the Baltic nation of Lithuania, Taiwan’s Foreign Minister Joseph Wu said at a briefing on Tuesday. Taiwan’s other diplomatic outposts on the continent are under the name of “Taipei.”

“Lithuania has firmly believed in universal values such as democracy, freedom and human rights, and is a like-mined partner of Taiwan,” Wu said. “Taiwan and Lithuania are both at the strategic front line to safeguard democratic and free regimes.”

Lithuania has supported the island’s attempt to participate in the World Health Organization’s annual policy-setting summit at the World Health Assembly, Wu said, an issue that became a geopolitical controversy between major powers as the island successfully fought the Covid-19 pandemic.

“All countries should be free to pursue closer ties and greater cooperation with Taiwan, a leading democracy, a major economy, and a force for good in the world,” the American Institute in Taiwan said in a statement. “The U.S. remains committed to supporting Taiwan in a manner consistent with the U.S. ‘one China” policy as Taiwan strengthens its international partnerships and works to address global challenges, including Covid-19, investment screening, and supply chain resilience.”

The U.S.’s closer ties with Taiwan in recent years have been a growing source of tension with China, which claims the islands and has threatened to use force to seize them if necessary. The strained relationship has even impacting Taiwan’s ability to procure vaccines even after Tsai’s government successfully kept the virus at bay since the pandemic began.

The development is also a setback to Beijing, which has wooed Europe’s eastern bloc members for years in an attempt to divide the European Union. China has been facing growing criticism from mainly Western countries over issues ranging from its handling of information on Covid-19 to its crackdown on Muslim Uyghurs in Xinjiang and democracy activists in Hong Kong.

Earlier this month Chinese Xi Jinping spoke with France’s Emmanuel Macron and Germany’s Angela Merkel in a bid to repair ties. That was followed by a meeting between Foreign Minister Wang Yi met with the EU’s High Representative for Foreign Affairs and Security Policy Josep Borrell in Tashkent.

Over the last couple of years, Beijing has also slowly squeezed Taipei’s few remaining diplomatic allies, particularly smaller island states in the south Pacific, Latin America and the Caribbean. Last summer, Taiwan set up a similar representative office to the one it’s opening in Lithuania in the territory of the unrecognized government of Somaliland in a bid to bolster its dwindling number of allies.

By Cindy Wang and Iain Marlow