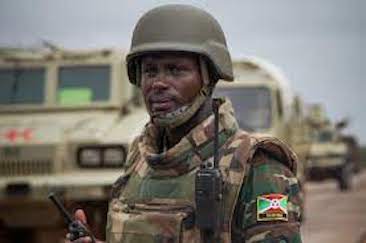 Amid funding challenges, the African Union (AU) will deploy a reconfigured force of the continental body’s peacekeeping outfit in Somalia for a proposed five-year period after the expiry of the current mandate at the end of this year.

Sources familiar with the plan told The EastAfrican that so far, the African Union, the Federal Government of Somalia and key donors have agreed on the agenda to “begin working towards determining the reconfigured force” of the African Union Mission in Somalia (Amisom).

The sources say the AU’s peace and security experts are working on things like threat assessment, mission requirements for both uniformed and non-combat personnel to inform the reconfigured force strength and funding needs.

Reconfiguration of Amisom is the option the AU has chosen out of four that its independent assessment team’s report proposed for the future of the mission. The first option was creation of a hybrid UN-AU force.

But the AU’s Peace and Security Council rejected the hybrid force on the grounds that it would be an obstacle to resolving the long standing problem of fragmented support to the mission.

The third and fourth options, were to deploy a regional force – the Eastern African Standby Forces – and for Amisom to exit Somalia.

The AU assessment team’s report says the primary mandate of the reconfigured force will be to enhance the capacity of the Somali Security Forces to assume their security responsibilities after being trained, mentored, reformed and restructured by Amisom.

But, Somali national Harun Maruf said last month that it is time to phase out AU/Amisom involvement in Somalia, after 14 years in which the force has not achieved much.

Another critic says extending the mission’s stay more than a year will be “pure catastrophe and a waste of resources”.

The UN, security experts and troop contributing countries concur that the threat of militant group al-Shabaab to overrun the capital and other regional cities once the peacekeeping force leaves, remains.

In its report to the United Nations Security Council, raises the clear danger of a vulnerable Somalia after the withdrawal of the US military which has been conducting air strikes against the al-Shabaab positions.

The report also notes that force drawdown of Amisom has reduced numbers and impacted its capacity to cover Somali forces to contain Al Shabaab, which “encountered little resistance in capturing several towns and villages previously been hostile” to the group.

The US Africa Command has also previously issued an assessment of al-Shabaab threat, saying since 2006, the Al Qaeda-linked militant group has increased its combat capability by seizing heavy weaponry, armoured vehicles, explosives, small arms ammunition and other supplies from assaults on Somali National Security Forces and Amisom, overrunning various African bases within the region.

“Al-Shabaab remains a threat to peace and security in Somalia,” the Africom assessment said.

But still smarting from years of frustrations during which troop contributing countries requests to the UN for force multipliers to increase their aerial firepower and combat capability against the Al Shabaab, were not honoured, the new mission promises to be a showdown between the AU and UN.

This comes on the back of funding cuts that the EU started in 2016, which saw the European body reduce support by 20 percent, and in the next mission has announced cuts of 10 percent per year.

“This mission will not be easy because the EU is cutting funding,” a source at Amisom who preferred anonymity in order to speak freely, said, adding that under these circumstances troop contributing countries prefer a shorter mission than the proposed five years.

According to our source, the AU will challenge the UN to put money into the mission because it is the latter that is mandated to keep peace internationally.

This week, Amisom said that following two days of closed-door meetings in Mogadishu, the AU the Federal Government of Somalia on August 19, signed an agreement on the likely configuration and proposed mandate of the continental body’s support to Somalia beyond December 2021.

Fiona Lortan, the AU Acting Director of Conflict Management at the Political Affairs, Peace and Security Department led the AU and Amisom teams.

“We know there is still a need for some sort of security presence from the African Union to assist the Somalia government in the next few years while it builds up its forces.

But even as the reconfigured force is yet to be defined, some troop-contributing countries have already stated that their armies will maintain presence in the Horn of Africa country.